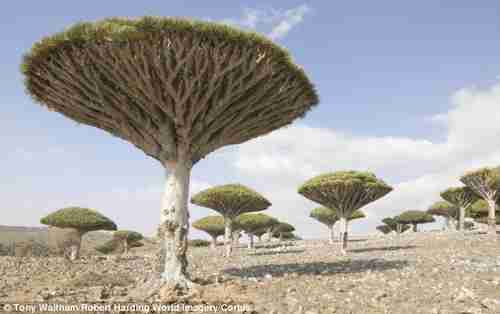 Landscape of Socotra Island, with hundreds of plant species found only there. Pictured are ‘dragon’s blood trees’ (Corbis/Daily Mail)

Residents of Socotra Island are reacting angrily and protesting about the increasing presence of hundreds of troops, tanks, armored transports, and heavy equipment that the United Arab Emirates (UAE) is deploying on the island in a power struggle with Saudi Arabia.

Socotra Island belongs to Yemen and is strategically located south of Yemen, where it oversees shipping traffic traveling from the Arabian Sea, through the Gulf of Aden and Red Sea through the Suez Canal.

Socotra Island is similar to the Galapagos Islands in that it has been isolated for millions of years, allowing for the development of hundreds of unique plant species found nowhere else on earth. Because of its unique plant life, it has recently been declared a UNESCO World Heritage Site.

Since 2015, Yemen has been the target of a proxy war Iran-backed ethnic Houthis versus an Arab military coalition led by Saudi Arabia. The war has become an example of an old African proverb: “When elephants fight, it’s the grass that suffers,” meaning the proxy war has caused endless misery to the ordinary people of Yemen, resulting in massive homelessness, starvation, and cholera. The end of the war seems to be nowhere in sight.

Now, the 60,000 people of the Socotra Island are being pulled into the war as well with the UAE deployment. Many of these people are furious at the UAE, and some are even accusing the UAE of deploying the military to steal UNESCO-protected species of plants and animals from the island. Middle East Eye and Independent (London) and Al Jazeera and Daily Mail (London, 25-Sep-2013)

Rift grows between Saudi Arabia and UAE in Yemen

The internationally recognized government of Yemen is led by President Abdu Rabu Mansour Hadi, who has been hiding out in Saudi Arabia because of the war with the Houthis. While the Houthis are backed by Iran, Hadi’s government is backed by a coalition led by Saudi Arabia.

As the war has continued for years with no end in sight, we reported in January that there has been a split between coalition members Saudi Arabia and UAE. This has resulted in military clashes between Saudi and UAE forces in the southern port city of Aden.

The UAE has been backing the Southern Transitional Council (STC), a separatist faction calling for the division of Yemen into Northern Yemen and Southern Yemen, and claiming Aden as the capital city of Southern Yemen.

The split between Saudi Arabia and UAE is potentially dangerous because UAE is attempting to extend its influence well beyond its borders into much of what the STC would like to be Southern Yemen. UAE’s move to exert control over Socotra is seen as a further move in that direction. Anadolu (Turkey) and Middle East Eye (12-May-2017) and Press TV (Iran)