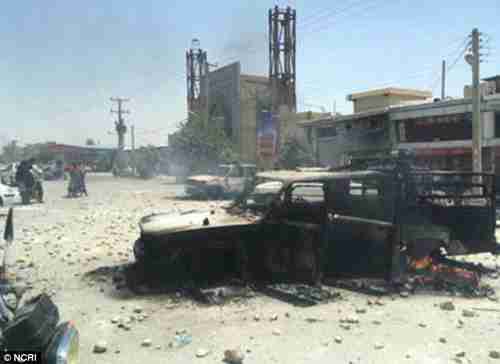 The latest in a series of anti-government protests in cities across Iran resulted in up to five protesters killed, and dozens more injured or arrested, by Iranian regime security forces in the last two days in the city of Kazerun (Kazeroon, Kazeroun) in southern Iran.

The population of Kazerun is about 150,000. The people are from the Qashqai tribe, a minority group of about a million people in Iran that the government has failed to fully integrate into the mainstream of Iranian society. Although they are Shia Muslims, they have little use for organized religion and are not devout followers.

They are a nomadic tribe, traditionally practicing pastoralism with sheep and goats, using camels as transports. They endure long seasonal migrations of hundreds of miles between lowland winter and highland summer pastures.

This lifestyle is relatively unique in Iran and explains why they are not integrated into mainstream society. Since the 1800s, their fortunes have gone up and down depending on who was in power in Iran. During the 1979 Great Islamic Revolution civil war, they fought in support of the Ayatollah Rouhollah Khomeini and the revolutionary side to oust the Shah of Iran.

After the revolution, Khomeini and the ruling regime looked upon the Qashqai with favor. But because the Qashqai were so different from the other Persian people, they quickly clashed with the new regime, which was following a psychopathically harsh version of Sharia law and imposing it on the entire country. The good feelings ended pretty quickly in 1980 when Qashqai leaders were arrested, but then escaped from prison and formed an anti-government insurgency. The regime captured the escaped Qashqai leaders and executed them.

Nonetheless, the Qashqai had been harshly suppressed under the Shah and benefitted greatly from the Khomeini regime in the 1980s. In particular, the government did not interfere with their pastoral activities nor their migration routes by which they traveled with their sheep and goats.

The Qashqai have been increasingly marginalized since the 1980s and they now harbor a great deal of anti-government sentiment. That sentiment spilled out onto the streets in the last few months.

Last year, a government official proposed a plan to split the county of Kazerun into two, and make other administrative changes. Although some Qashqai supported the plan, most bitterly opposed it, particularly the undeveloped and poor districts which viewed the plan as further discrimination. Radio Farda and JCPA and Cultural Survival and Against The Compass 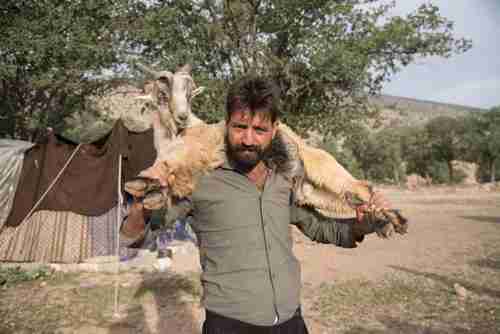 An Iranian Qashqai nomad carries a live goat from his herd

The people of Kazerun have been peacefully protesting for weeks against the administrative plan to split the county. The government made some concessions, but apparently their sincerity was in doubt.

On April 20, the protesters occupied the site for the city’s Friday prayers. There were a number of extremely angry chants, including “Our enemy is right here; liars say it is America,” but there were other, more shocking slogans too, including “Be afraid when we get guns” and “We will kill the traitors.”

These chants revived memories of massive protests in cities across the country starting in late December of last year. At that time, there were chants like, “Seyed Ali [Khamenei] shame on you let go of our country,” “Death to the Dictator,” “Death to Rouhani,” “Leave Syria, think about us,” and “Forget about Gaza and Lebanon; I’ll sacrifice my life for Iran.”

Iran is in a generational Awakening era, following the 1979 Great Islamic Revolution civil war. The psychopathic hardliners view any sort of peaceful protest as a revival of the civil war, and so even peaceful protests have to be crushed brutally. So the Iranian regime brutally crushed the protests in January, killing some protesters and arresting several thousand.

The peaceful Kazerun protests of the last few weeks are being interpreted the same way, as an existential threat to the Khamenei regime, and so they have to be crushed brutally as well.

There is an irony about this situation in that it is occurring at the same time as Iran’s government is criticizing the Israelis for the deaths of people from Hamas trying to break through the border fence from Gaza into Israel. Iran’s government is criticizing the Israelis, but ignoring their own actions in Kazerun. The protesters themselves have noticed this hypocrisy in some of their chants: “The Government Supports Gazans, But Betrays Kazerun,” and “Our Enemy is Here, not in the US.” Iran Wire and Deutsche Welle and CNN (14-Jan-2018) and JCPA