China will end ‘two-child policy’ and all limits on births 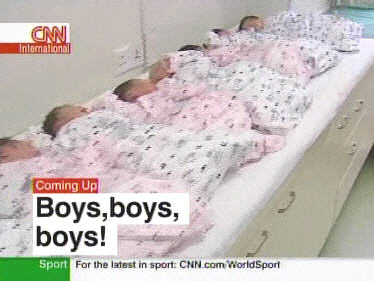 Since 1979, China has attempted to control the size of its population by adopting a “one-child policy” that limited the number of children a couple could have to just one. Only recently did Xi Jinping expand it to a “two-child policy,” which still limits the size of families.

Now the government in Beijing is realizing that this is a demographic disaster in two ways. First, China’s population is aging rapidly, and pension payments are not keeping up. Second, since parents wanted to have a son more than a daughter, there is a huge gender imbalance. Out of China’s population of 1.4 billion, there are nearly 34 million more males than females.

Now China is considering removing all limits to birth. The new rules would take effect at the end of this year or in 2019. This announcement has the feeling of a move of desperation. The one-child policy was reformed in 2013, when China announced that couples where one parent is an only child would be allowed to have a second child. When that policy failed miserably, China announced in October 2015 that all couples would be permitted to have two children.

Even that change had almost no effect at all. In Beijing, for example, just 6.7 percent of those eligible applied to have a second child. Couples are complaining that they can barely afford the costs of raising one child, so they do not want to risk the financial burden of a second child.

China’s birth rate has dipped below the “replacement level,” necessary to keep the population growing. As things stand, China’s population will peak at about 1.45 billion in 2030. Furthermore, its workforce will age to the point where those 45-69 will account for over 1/3 of the population.

China’s president Xi Jinping has promised to build a world-class military force. His plans face many serious problems, and one of the most serious is that China’s youth in the 2020s will be too busy producing food and medicines for an aging population. Bloomberg and South China Morning Post (26-Jan-2018) and Bloomberg (26-Jun-2017)

On average in the world, humans give birth to 103 boys for every 100 girls. The number of boys is greater since men are more likely than women to be killed in war. But 114 to 100 is not expected.

Theoretically, the one-child policy should not affect the gender ratio at all. If you are going to restrict the number of births, then theoretically you would restrict the births of boys and girls equally. But that is not what happened in China. If a woman was to be restricted to having just one child, then she and her husband often wanted that child to be a boy, rather than a girl, since a boy would be able to support his parents as they grew older.

Female infanticide increased when the one-child policy came into effect, taking advantage of a loophole that if your one child died, then you were allowed to have another child. Ultrasound tests became generally available in the 1980s, and although they were banned in 1994, women still were able to find them and abort a baby if it was a girl. This created the gender imbalance.

The disastrous consequences of the one-child policy are now being felt today, as the children who were born in the 1980s-90s are coming of age. Millions of men are unable to find girlfriends and wives, which creates not only a loneliness problem, but also a risk to the stability of society. If there are too few girls, then they are likely to be tempted into prostitution, or to be abducted and sold for human trafficking.

China is not alone in this situation. Birth rates have been falling in countries around the world. In the United States, the fertility rate has fallen to a historic low. The trend is being driven by a decline in birthrates for teens and 20-somethings. The birthrate for women in their 30s and 40s increased — but not enough to make up for the lower numbers in their younger peers.

From the point of view of Generational Dynamics, what we are seeing is the reflection of the baby boom that occurred at the end of World War II. Women were reluctant to have children during the Great Depression and WW II, but when the war ended, there was an explosion of births, giving rise to what demographers call the Baby Boom generation.

Today, we are seeing a situation where there is a lot of anxiety about the future. There has been a financial crisis, there are multiple wars in progress in the Mideast, and war with North Korea and China is on the horizon. Many women do not wish to have a baby under these circumstances, so we are seeing a drop in fertility rate. But after the next world war ends, then we will see a new baby boom. Washington Post and Reuters and Time (27-July-2009) and National Geographic (13-Nov-2015) and Washington Post (30-June-2017)