India cancels ceasefire in Kashmir after one month 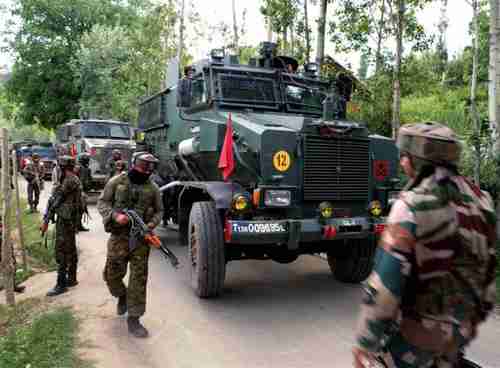 India announced on Sunday that it would not renew a month-old unilateral ceasefire in the Indian-controlled portions of Jammu and Kashmir. Instead, it will resume military operations against rebels whom it considers to be terrorists or suspected terrorists.

India had halted military operations on May 16, which was the start of the Ramadan, the annual Muslim fasting month. Jammu and Kashmir are Muslim-majority regions, and it was hoped that the ceasefire gesture would bring an end to the violence between Hindus and Muslims in Kashmir. From the point of view of Generational Dynamics, such an outcome was 100 percent impossible.

While the security forces have displayed exemplary restraint during this period, the terrorists have continued with their attacks, on civilians and SFs (security forces), resulting in deaths and injuries.

The security forces are being directed to take all necessary actions as earlier to prevent terrorists from launching attacks and indulging in violence.

The decision not to extend the ceasefire was made on Friday, during a high-level government meeting in New Delhi. The debate was won by the side opposing an extension because anti-government violence continued as usual during the month-long ceasefire, especially the assassination of veteran journalist Shujaat Bukhari and his two security guards on June 14. Bukhari was well-known as editor of the newspaper Rising Kashmir. The Hindu and AFP and Deccan Herald (India) and BBC

A report by the United Nations Office of the High Commissioner for Human Rights (ONCHR) condemns India’s actions in Jammu and Kashmir as human rights violations.

The UN report describes the same sequence of events that I have been reporting on for two years. On July 8, 2016, Burhan Wani, 22, the leader of anti-Indian separatist organization Hizbul Mujahideen, was killed in a gunfight with the Indian Army. This triggered massive anti-Indian protests and clashes with Indian police that killed 36 and left thousands injured.

These clashes continued into the fall and then resumed again in the Spring of 2017. In all the clashes, Indian police responded with rubber bullets, leaving thousands of protesters wounded or killed or blinded by pellets.

The UN report described these incidents but is rejected by India amid claims that the report is one-sided, and does not document the activities of Pakistan-supported terrorist groups in Kashmir.

However, the report is not completely silent on these terrorist groups. According to the UN report:

Since the late 1980s, a variety of armed groups has been actively operating in the Indian state of Jammu and Kashmir, and there has been documented evidence of these groups committing a wide range of human rights abuses, including kidnappings, killings of civilians and sexual violence. The landscape of armed intervention by groups operating in Indian-Administered Kashmir has shifted over the years. In the 1990s, around a dozen significant armed groups were operating in the region; currently, less than half that number remain active. The main groups today include Lashkar-e-Tayyiba, Jaish-e-Mohammed, Hizbul Mujahideen and Harakat Ul-Mujahidin; they are believed to be based in Pakistan-Administered Kashmir. Hizbul Mujahideen is also part of the United Jihad Council, which began as a coalition of 14 armed groups in 1994, claiming to be fighting Indian rule in Kashmir, that was allegedly formed by Pakistan’s defence establishment. Despite the Government of Pakistan’s assertions of denial of any support to these groups, experts believe that Pakistan’s military continues to support their operations across the Line of Control in Indian-Administered Kashmir. Three of these armed groups (Lashkar-e-Tayyiba, Jaish-e-Mohammed and Harakat Ul-Mujahidin) are listed on the Security Council “ISIL (Da’esh) & Al-Qaida Sanctions List” for their activities in Indian-Administered Kashmir among other places.”

As I described in the past, India’s last two generational crisis wars were India’s 1857 Rebellion and the 1947 Partition war that followed the partitioning of the Indian subcontinent into India and Pakistan. From the point of view of Generational Dynamics, India, Pakistan, and Kashmir are now in a new generational Crisis era, and headed for another war, re-fighting the 1947 Partition war. No Ramadan ceasefire has any chance of preventing this. UN OHCHR – Kashmir report and New Indian Express and Dawn (Pakistan) and Human Rights Watch