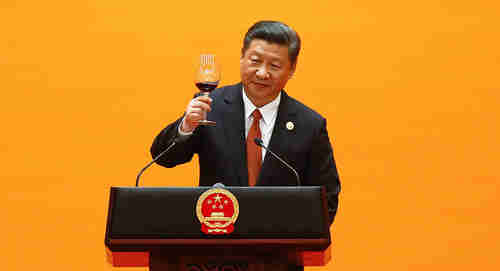 Chinese President Xi Jinping makes a toast at the beginning of the welcoming banquet at the Great Hall of the People during the first day of the Belt and Road Forum in Beijing, China, May 14, 2017 (Reuters)

China’s president Xi Jinping is hosting, on Monday and Tuesday, the Forum of China-Africa Cooperation (FOCAC), attended by leaders of more than 50 African countries. At the meeting, he announced that China will offer a huge $60 billion in aid for African nations, mostly to develop infrastructure projects for China’s Belt and Road Initiative (BRI).

Xi was eager to refute the growing concerns that China’s BRI investments are a form of “neo-colonialism,” using the aid money as a “debt trap” as leverage to exert control over the internal affairs of the countries involved and, when the debt money cannot be paid back, to gain control of valuable assets, as has already happened when Sri Lanka was unable to repay its debt for the building of the valuable strategic Hambantota seaport.

So Xi may a point of saying the following: “China’s investment in Africa comes with no political strings attached. China does not interfere in Africa’s internal affairs and does not impose its own will on Africa.”

The claim was laughable, as proven by this very conference. Every African nation but one was invited. The one that was excluded was Swaziland, which just happens to be the only African nation left that has diplomatic relations with Taiwan rather than China.

The people of eSwatini have been benefiting from the cordial relations existing between Taiwan since independence 50 years ago. The nation is benefiting and by extension as expected the leader benefits.

Taiwanese doctors continue to be pillars of our health system. To say it is the king alone who benefits is a projection of political bankruptcy on the part of the accuser.

Everywhere in the world, culture is the soul of a nation, only a political imbecile would put a regional meeting above the soul of the nation.

According to one senior Chinese diplomat recently, China has been upping the pressure on the country, and they expect the eSwatini to change policies soon.

So Xi’s claim that aid comes “with no political strings attached,” and “China does not interfere in Africa’s internal affairs and does not impose its own will on Africa” is really an insult to everyone’s intelligence. AP and AFP and Reuters

Is Kenya the next Sri Lanka?

Xi Jinping also sought to reassure African leaders that he is not leading them into a “debt trap,” where the objective of China’s policy is to put a country into a position where it is forced to give up valuable assets in lieu of paying off its debt to China.

Many Kenyans, in particular, are concerned that they are going to be forced to give up the Mombasa seaport, just as Sri Lanka was forced to give up the Hambantota seaport. And indeed, I doubt that few people would be surprised if that were China’s actual unstated policy. As I described last month in “14-Jul-18 World View — China’s railway contractor in Kenya accused of ‘neo-colonialism, racism and blatant discrimination'”, China’s infrastructure projects are set up contractually to make this kind of default as likely as possible.

Chinese officials have been bragging that China is charging low-interest rates on its latest loans, but interest rates are actually a small part of the problem.

Researcher Anne Stevenson-Yang describes the problem succinctly as follows: China’s loans are quoted in dollar terms, “but in reality they’re lending in terms of tractors, shipments of coal, engineering services and things like that, and they ask for repayment in hard currency.”

This one-sentence description is highly significant, as becomes apparent with the lengthier explanation I have given in the past:

This debt acquired from China comes with huge business for Chinese companies, particularly construction companies that have turned the whole of Africa into a construction site for rails, roads, electricity dams, stadia, commercial buildings and so on.

According to the International Monetary Fund (IMF), Chad, Eritrea, Mozambique, Congo Republic, South Sudan, and Zimbabwe were considered to be in debt distress at the end of 2017 while Zambia and Ethiopia were downgraded to “high risk of debt distress.”

When America loans money to a country, either directly or through the IMF, it is a small enough amount that one can be certain that it can be repaid. One thing that is clear from China’s policies is that they are making loans without any guarantee that they will be repaid and, in fact, where it is all but certain that they will not be repaid. It appears to be China’s policy to make loans that cannot be repaid and then take control of infrastructure and land in the target country. That is why China has control, or will soon have control, of seaports across the Indian Ocean, in Sri Lanka, Pakistan, Djibouti, and Kenya. BBC and The Nation (Kenya) and Standard Media (Kenya) and Sputnik News (Moscow)

Why China’s mothers are refusing to have a second child

Last week, I wrote “29-Aug-18 World View — China ends two-child policy, but considers a ‘wacky’ three-child policy”, about why mothers were not having a second child, even when the one-child policy ended. It seems that there are a lot of reasons why China’s mothers do not want more than one child, according to a web site reader who sent me the following:

My Chinese wife was an elementary school teacher in Xi’an, China. She says that the biggest reasons why the two-child policy would fail were mostly economic. Consider the following:

In short, even one child is too expensive for a couple in China.

Then comes the fact that now, a married couple also has to support *two* sets of parents. My wife has four sisters and a brother, so they have no problems taking care of her parents. But her son, and her nieces and nephews, will have to support *two* sets of parents because of the one-child policy in place for their generation. Add to that the costs of bribing their children through the education system, and you have a completely broken economic system at the family level.

That is why an increasingly large number of Chinese children are delaying marriage, and often forsaking the entire concept.