Pooh suddenly became problematic because his likeness has been used in viral memes considered insulting to China’s authoritarian leader.

“I didn’t make a fuss about it. It was only 20 or 30 minutes. If it’s offensive, I understand that they would ask me to step aside,” the performer told reporters, explaining that Pooh was kept under wraps just long enough for Xi’s motorcade to pass through the square without catching a glimpse of his copious golden posterior.

The Chinese government regards Pooh with the same disdain as a hive of honeybees because someone thought a photo of portly Xi strolling alongside former U.S. President Barack Obama in 2013 resembled Pooh strolling alongside his pal Tigger. Viral mockery struck a fever pitch the following year when Xi shook hands with a dour Prime Minister Shinzo Abe of Japan and the scene was compared to Pooh shaking hands with downbeat donkey Eeyore. 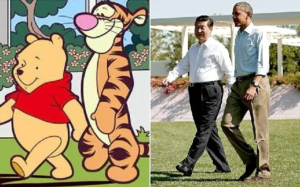 Authoritarian dictators generally dislike being compared to cartoon characters – just as anyone in Turkey learned who dared remark upon the likeness between their president and a certain tragically flawed character from a blockbuster fantasy series.

China declared war on the Hundred Acre Wood and refused even to permit the release of the movie Christopher Robin in 2018 because it concerns the grown-up version of the title character reconnecting with Winnie the Pooh many years after leaving him behind. Photos of Pooh are said to be among the most censored images on China’s tightly-controlled Internet.

Xi’s Pooh-free excursion to Madrid was regarded as a mixed success, since he was able to secure Spanish cooperation on a number of accords but could not get them to join the Belt and Road Initiative, China’s international infrastructure initiative.