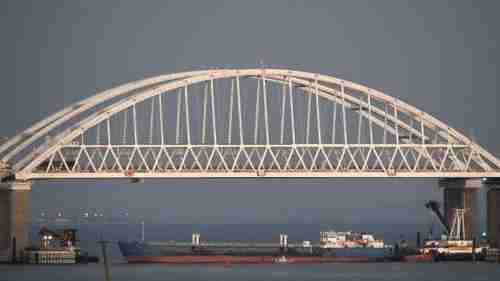 Ukraine said on Tuesday that Russia had “partially unblocked” access to its blockaded Berdyanks and Mariupol ports on the Sea of Azov. As of Monday, ships were allowed to move in both directions through the Kerch Strait separating the Azov and Black Seas, although Russia stops all ships and inspects them.

Russia blockaded access to the Ukrainian ports on November 25 when it rammed, fired on, boarded, and seized three Ukrainian navy vessels, accusing them of traveling through territorial waters of occupied Crimea, which Russia had invaded and annexed in 2014.

Legal experts point out that under international law, the “innocent passage” of the three ships should have been permitted, even if they were within Crimean or Russian territorial waters.

Analysis of photos of the Ukrainian ships after the incident shows that they were rammed four times by a Russian warship and that the Russian live fire was aimed to injure or kill the Ukrainian sailors, rather than to disable their ships.

Turkey and Ukraine may establish strategic military partnership against Russia

Last month on November 3-4, prior to the Kerch Strait seizures, Ukraine’s President Petro Poroshenko visited Turkey to meet with Turkey’s president Recep Tayyip Erdogan. They discussed issues falling into three main “baskets”: the military, economics, and Turkish arbitration in Ukraine’s relations with Russia – in particular concerning the situation of the Tatars in occupied Crimea. This was the latest in Ukrainian-Turkish initiatives to cooperate in the military sphere, including joint development of weapons systems.

The growing military cooperation between Turkey and Ukraine is, at the very least, an annoyance to Russia. Beyond that, particularly with Turkey as a member of NATO, the cooperation limits Russia’s hand in the Black Sea.

Since the Kerch Strait incident on November 25, Turkey has offered to play a “mediator” role between Ukraine and Russia to resolve the crisis. Ukraine has made two requests for protection from further aggression by Russia.

First, Ukraine has asked NATO to conduct “Freedom of Navigation Operations” (FONOPs) through the Kerch Strait, just as the U.S. Navy warships conduct FONOPs through the South China Sea. It is unlikely that NATO will grant this request.

Second, Ukraine has asked Turkey to invoke the Montreux Convention, to shut down the Bosphorus and the Dardanelles, in order to block passage of Russia’s ships between the Black Sea and the Mediterranean. Once again, it is unlikely that this request will be granted. Jamestown and Anadolu and AFP and UNIAN (Ukraine)