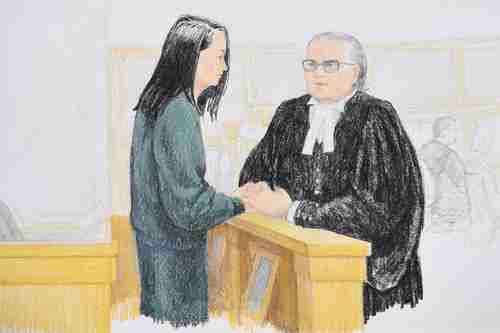 Michael Kovrig, a Canadian journalist and analyst working as a China expert for the International Crisis Group, has suddenly disappeared while in China. Kovrig is also a former Canadian diplomat.

Many have assumed Kovrig was arrested by China’s security forces. According to one analyst, the Chinese will hold someone for 37 days before he is given access to a lawyer.

Many people additionally believe that Kovrig was arrested, without charges or justification, in retaliation for Canada’s arrest of Huawei CFO Meng Wanzhou, arrested after a multi-year investigation alleging that Meng conducted massive counts of bank fraud in order to violate U.S. sanctions against Iran.

The fact that Meng was charged with multiple real crimes, while Kovrig was arrested without any justification, is just one of the differences between the two cases.

A second difference is that Meng was immediately given access to her family and a lawyer and was told what the charges were. Kovrig has completely disappeared, having access to no one.

Third, Meng was tried in a real court, where her lawyer could defend her. If Kovrig’s case is typical, he will be thrown into jail, tortured, and forced to confess to a crime he knows nothing about.

Almost every day something new happens that makes China appear to be a country falling apart at the seams. This is not good, as it will lead to a great deal of bloodshed and a world war. Toronto Star and South China Morning Post and Canadian Broadcasting

Chinese authorities have the broad ability to prohibit travelers from leaving China (also known as ‘exit bans’); exit bans have been imposed to compel U.S. citizens to resolve business disputes, force settlement of court orders, or facilitate government investigations. Individuals not involved in legal proceedings or suspected of wrongdoing have also be subjected to lengthy exit bans in order to compel their family members or colleagues to cooperate with Chinese courts or investigators.

U.S. citizens visiting or residing in China have been arbitrarily interrogated or detained for reasons related to “state security.” Security personnel have detained and/or deported U.S. citizens for sending private electronic messages critical of the Chinese government.

It is pretty clear from this State Dept. warning that things like arresting and burying Michael Kovrig are a fairly common occurrence in China. US State Dept.

How Michael Kovrig infuriates the Chinese

Michael Kovrig is a fluent Mandarin speaker and an analyst for the International Crisis Group. I was curious to see what he has written, and I found his most recent article on the ICG web site, “China Expands Its Peace and Security Footprint in Africa.” It is a lengthy article, and here are some excerpts:

[O]fficials from 53 African countries and the African Union (AU) [came] to Beijing for meetings that culminated in a resolution to continue strengthening ties and a renewed pledge of billions of dollars in Chinese loans, grants and investments. Over the past decade China’s role in peace and security has also grown rapidly through arms sales, military cooperation and peacekeeping deployments in Africa.

A more controversial sign of China’s military footprint is the 36-hectare Djibouti facility that the PLA established in 2017 with a ten-year lease at $20 million annually. The PLA describes it as a support base for naval anti-piracy operations in the Gulf of Aden, peacekeeping in South Sudan and humanitarian and other cooperation in the Horn of Africa, but has also used it to conduct live-fire military exercises.

Less noticeable to outsiders but broader in impact is China’s direct defence and security cooperation with African counterparts. This takes place through a growing number of joint exercises, naval patrols and exchanges. In the first half of 2018 alone, the PLA Navy’s 27th and 28th anti-piracy escort task forces reportedly visited ports in Cameroon, Gabon, Ghana and Nigeria, while PLA units conducted drills in the same countries, and its medical teams did work in Ethiopia, Sierra Leone, Sudan and Zambia. Mere months after Burkina Faso’s May decision to switch diplomatic recognition from Taipei to Beijing, the PLA is already working to develop military ties that will likely emphasize counter-terrorism cooperation.

The political and defence relationships fostered by these programs grease the wheels for weapons sales. Data compiled by the Stockholm International Peace Research Institute (SIPRI) shows that China has become the top supplier of arms to sub-Saharan Africa, accounting for 27 per cent of the region’s imports over the four year period from 2013-2017, an increase of 55 per cent over 2008-2012. Some 22 countries in the region have procured major arms from Chinese suppliers in recent years, key among them Ghana, Kenya, Nigeria, Tanzania and Zambia. In June, China’s State Administration for Science, Technology and Industry for National Defence reported that Beijing now has defence industry, science and technology ties with 45 African countries.

China’s own expanding economic interests are a further driver. Africa’s largest trading partner since 2009, China increasingly counts on the continent for natural resources and markets to maintain its own growth and social stability. …

Moreover, roughly a million Chinese are estimated to live and work in Africa, and China’s leaders have a domestic political imperative to ensure their safety. Beijing has already contended with evacuations from Libya, South Sudan and Yemen, and incidents of violence and property damage elsewhere. The 2017 Chinese blockbuster action movie Wolf Warrior II brought home a Rambo-esque fantasy version of these concerns. Set in a nameless African country that descends into chaos, it closes with the hubristic message that China’s government will protect its citizens wherever they go.

China’s politicians are people that become infuriated by Winnie the Pooh, so it is not surprising that this criminal nation would be infuriated by this kind of analysis. It is quite possible that they have been planning to arrest and bury Michael Kovrig for some time, and the arrest of Meng Wanzhou provided the perfect opportunity. International Crisis Group (24-Oct)

There was a burst of applause on Tuesday afternoon in the Vancouver Supreme Court courtroom when the court granted bail to Huawei CFO Meng Wanzhou.

Meng is not scheduled to appear in court again until February 6, at which time a hearing will be held to determine whether Meng should be extradited to the United States for a setting up a complex international financial system, defrauding banks in several countries, to violate U.S. sanctions laws with regard to Iran.

The judge said that Meng’s husband Liu Xiaozong would pledge a total of $15 million — including the value of two Vancouver homes and $7 million in cash — and live with her to ensure she obeys court conditions. Meng must also report to a bail supervisor, maintain good behavior, live at a house owned by her husband, and stay in that house between the hours of 11 p.m. and 6 a.m. She must also surrender her passports, wear an electronic monitoring bracelet on her ankle and live under surveillance 24/7.

However, these people are billionaires, and this money means nothing to them. I do not believe anyone will be too surprised if Meng does not show up at the February 6 court hearing and an investigation shows that she eluded the police by wearing a turban, a long fake beard, and a Sikh chola, carrying a pair of swords.

Apparently, what convinced the judge is that four other friends were willing to guarantee that she would not skip bail. He told the courtroom he believed “the risk of her non-attendance in court can be reduced to an acceptable level” under the bail conditions.

There is an unconfirmed suspicion that the arrest of Michael Kovrig in the criminal nation China was a factor, since not granting bail to Meng could mean torture and additional detention for Kovrig. Even with bail, the suspicion is that the fate of Kovrig is directly dependent on the fate of Meng in the Vancouver courtroom. Toronto Star and Canadian Broadcasting