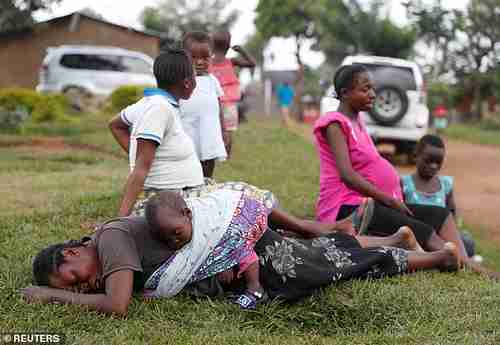 A woman cries during the funeral of a child, suspected of dying from Ebola. (Reuters)

The number of Ebola cases recorded each day in the Democratic Republic of Congo (DRC) has doubled, indicating that it may spread to other regions and other countries.

According to Jean-Philippe Marcoux, country directory for Mercy Corps in DRC, “Now it’s doubling – it’s very possible that it can double again. If we don’t significantly increase the resources, it will keep increasing. It will spread progressively to other health areas and it will be there for a long time.”

If this doubling continues, it would represent exponential growth.

The current Ebola outbreak in DRC began in July 2018 and is now the largest in that country’s history and the second largest ever recorded. According to the country’s health ministry, as of January 17, 2019, there have been 668 cases and 410 deaths in the outbreak.

The cases are centered in two northeastern provinces, North Kivu and Ituru, which is a war zone in an extremely violent ongoing ethnic civil war. No cases have yet been identified outside DRC, but the increasingly rapid spread of the disease is raising concerns that it will soon travel to Uganda, Rwanda, Burundi, and even South Sudan.

The epidemic was originally centered in Beni, with a population of 232,000. But it has spread to Butembo, with a population of over a million, a densely populated trade city near the Uganda border. Further south along the highway from Butembo are the million-plus population cities Goma and Bukavu. The World Health Organization (WHO) has been focusing its efforts on preventing a spread to the latter two cities, since “all bets are off” for stopping the epidemic if it reaches there.

The problem is that the continuing war causes the disease to spread in an uncontrolled and unexpected fashion. The result is that new cases of Ebola keep popping up in unforeseen places and people.

Normally, the medical professionals use contact tracing to identify potential chains of transmission before they occur. Once a person is suspected of having Ebola, all the people that he might have had contact with are identified and given a vaccine. But the ongoing war often makes contact tracing impossible, with the result that nearly 70 percent of the newly discovered cases have fallen outside of known chains of transmission. Another problem is that rape is common in any war zone and so Ebola can be spread among women, soldiers, gangs, arms smugglers, and rapists. More than one-third of the Ebola cases have been in children and the majority of identified adult infections have been in women.

WHO is predicting that the outbreak will continue for six more months or even longer. But even if the outbreak could be contained quickly – and it cannot – then it could quickly be restarted because the disease can be transmitted sexually up to 18 months after an individual’s cure and it can also pass from pregnant mothers to their fetuses. Guardian (London) and Kaiser Family Foundation and Daily Mail (London)

The local population in the North Kivu war zone in the Democratic Republic of Congo (DRC) are often refusing to cooperate with health officials to stop the epidemic. Even worse, health officials have been kidnapped or killed by armed groups and treatment centers have been ransacked.

There are several issues:

It is interesting to trace the changes in public mood and attitude toward Ebola.

When the huge outbreak began in western Africa in 2014, there was almost international hysteria. It continued into 2015 and only really subsided when the outbreak ended in 2016.

Early in 2018, there was an outbreak in western DRC (the other end of the country from the current outbreak). This raised international concern, but world health officials ended it quickly, thanks to the new experimental vaccine.

Then in July 2018, the new outbreak began in eastern DRC, in North Kivu. Having an active outbreak of Ebola has become the “new normal” in people’s minds, and so there has been little concern or media coverage. And why should there be any media coverage, when there are more important subjects: Brexit in Europe, the border wall in America, and jailing Canadians in China.

But even among the local population in North Kivu, there seems to be little concern. Many people do not believe anything the U.N. says and do not believe there is an Ebola outbreak. Others just assume that it will be quickly ended, like the previous Ebola outbreaks. Others simply have other worries on their minds: getting beaten, raped, or shot by gangs or warring militias.

If a few cases pop up in neighboring countries, health officials will move quickly to contain them, and will probably succeed since they are not in war zones. The real danger is that Ebola will become endemic in North Kivu and become a continuing source of infection that can go on for years. Foreign Policy and Médecins Sans Frontières (MSF)