Latin American artists from throughout the hemisphere convened in Cúcuta, Colombia, Friday, on the border with Venezuela, for the Richard Branson-sponsored “Venezuela Aid Live” concert to demand dictator Nicolás Maduro allow international aid into the country.

The long list of diverse artists — many who have been household names in Latin America for decades — did not shy away from making political statements in support of Venezuela’s legitimate president, Juan Guaidó, and demanding that Maduro step aside. Several artists indulged the audience in what has become a common back-and-forth chant at anti-socialist protests: “Maduro, ¡el coño de tu madre!” or “Maduro, your mother’s cunt,” which was also featured as a lyric in the first song performed at the concert.

Among the most extensive remarks offered by artists was by José Luis Rodríguez, also known as “El Puma,” a Venezuelan romantic singer popular throughout the continent for decades.

“I thank God and my beloved Christ for letting me see this day, for letting me see a free Venezuela, that He didn’t take me away before seeing this,” Rodríguez said before his performance. “I want to thank Brazil, thank you to our beloved Colombia, and to the United States for the help and solidarity they have had with us.”

“It is so simple to ask for freedom after 20 years of dictatorship, of Marxist populist dictatorship that is tending to end throughout Latin America. It is not much to ask: enough of left-wing dictatorships in Latin America,” he demanded, adding that the blood of the hundreds of peaceful protesters the Maduro regime has killed since coming to power in 2013 “will not be spilled in vain, it will lead us to freedom.”

The Spanish artist Miguel Bosé also made extensive comments, though much more aggressively than Rodríguez. Bosé demanded that Maduro be “captured and accused of crimes against humanity” before an international court, citing years of eyewitness, nongovernmental organization (NGO), and United Nations reports of murder, rape, and torture in Venezuelan prisons targeting political dissidents.

“I am a father, and I would never in my life let my children die of hunger or lack of medicine. A president should do the same for his people,” Bosé argued, urging Michelle Bachelet, the U.N. high commissioner for human rights and former president of Chile, to “get off your ass” and use her power to punish Maduro.

Bosé was among the artists who invited the audience to chant “Maduro, ¡el coño de tu madre!” along with the Venezuelan artists Chyno and Carlos Baute. Some of the concert organizers, who helped ease transitions as the stage was reset for new artists, also wore t-shirts bearing the slogan.

Reymar Perdomo, the Venezuelan singer who opened the concert, performed her song about leaving Venezuela featuring the slogan, titled “‘Me Fui,” or “I Left.”

Branson made a small speech before the concert took off around 11:00 a.m. Eastern time. Unlike many of the Venezuelan artists, he did not mention socialism or Maduro in an aggressive way, instead defining himself against “poverty” and urging the world to send humanitarian aid to Venezuela, even though Maduro has ordered his military to block the entry of any aid coming from the United States or any country other than Russia and China.

“If we can send people to space, why is it so hard to bring our brothers out of poverty?” Branson asked. “This concert was put together to bring in much-needed humanitarian aid, it is to mark a difference in the lives of millions of people who have suffered for too long.” 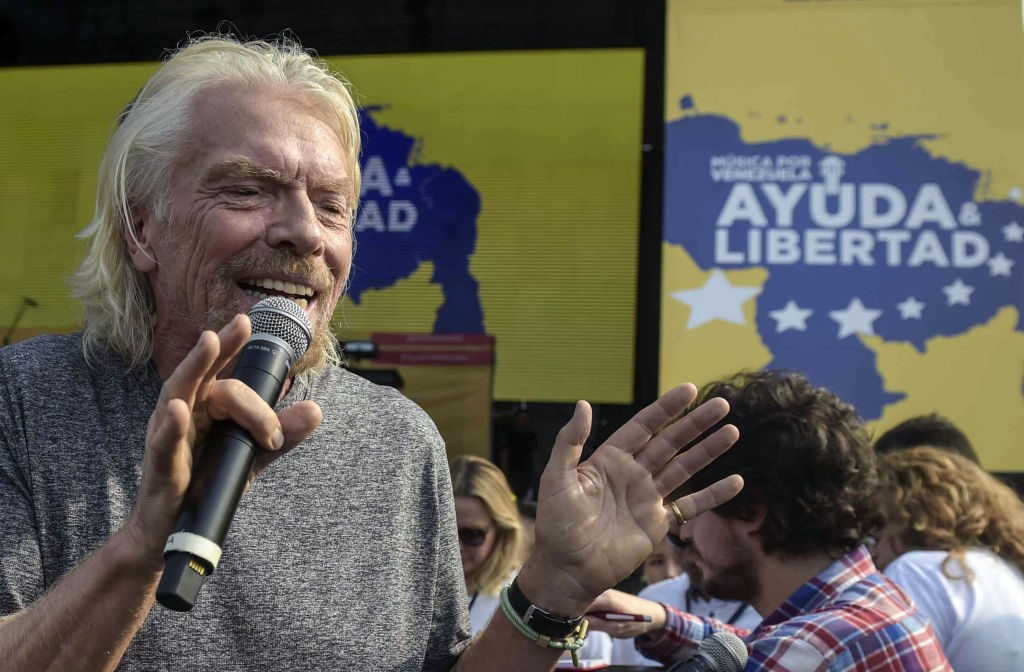 Branson, a family friend of the Cuban Castro dictatorship that sponsors Maduro, has received significant criticism from the left for organizing the concert. Among his loudest critics has been the leftist rock singer Roger Waters, who has recently reinvented himself as a staunch defender of Marxist Latin American regimes. While receiving praise and being referred to as “comrade” on Maduro-controlled Venezuelan state television on Friday, Waters’ meddling in Latin American affairs has made him increasingly unpopular in the region. Branson dismissed his criticism, saying he “doesn’t know what he is taking about.”

Venezuela Aid Live is ongoing at press time, set to still feature several top-billing artists before the end of the day. Branson has said the goal of the concert is to attract $100 million in funding for Venezuelan humanitarian aid in the next 60 days. Artists at the event noted that Branson’s group will begin attempting to bring humanitarian aid across the border tomorrow, risking violent attacks by Maduro troops.