The internationally-recognized government has accused the LNA’s foreign supporters of providing the aircraft used in the recent attacks on Tripoli.

“We cannot move because of the shelling from both sides. Our homes have been damaged. We are trying to leave the area to a safer place,” Mohammed al-Trapoulsi, a 41-year-old father of three from southern Tripoli, told Al Jazeera.

Reporting from inside Tripoli, Al Jazeera’s Mahmoud Abdelwahed attributed Haftar’s decision to step up his campaign on the LNA’s recent loss of territory to the internationally-recognized government’s forces.

In the past two weeks, Haftar’s forces were losing ground and the [United Nations-brokered GNA’s [Government of National Accord] forces were pushing them back. After they lost ground, Haftar’s forces intensified air strikes. The situation remains very tense, especially for civilians living in or near the fighting areas.”

This month, the U.N. confirmed “indiscriminate shelling of civilian areas in Tripoli,” including in refugee and migrant detention centers. 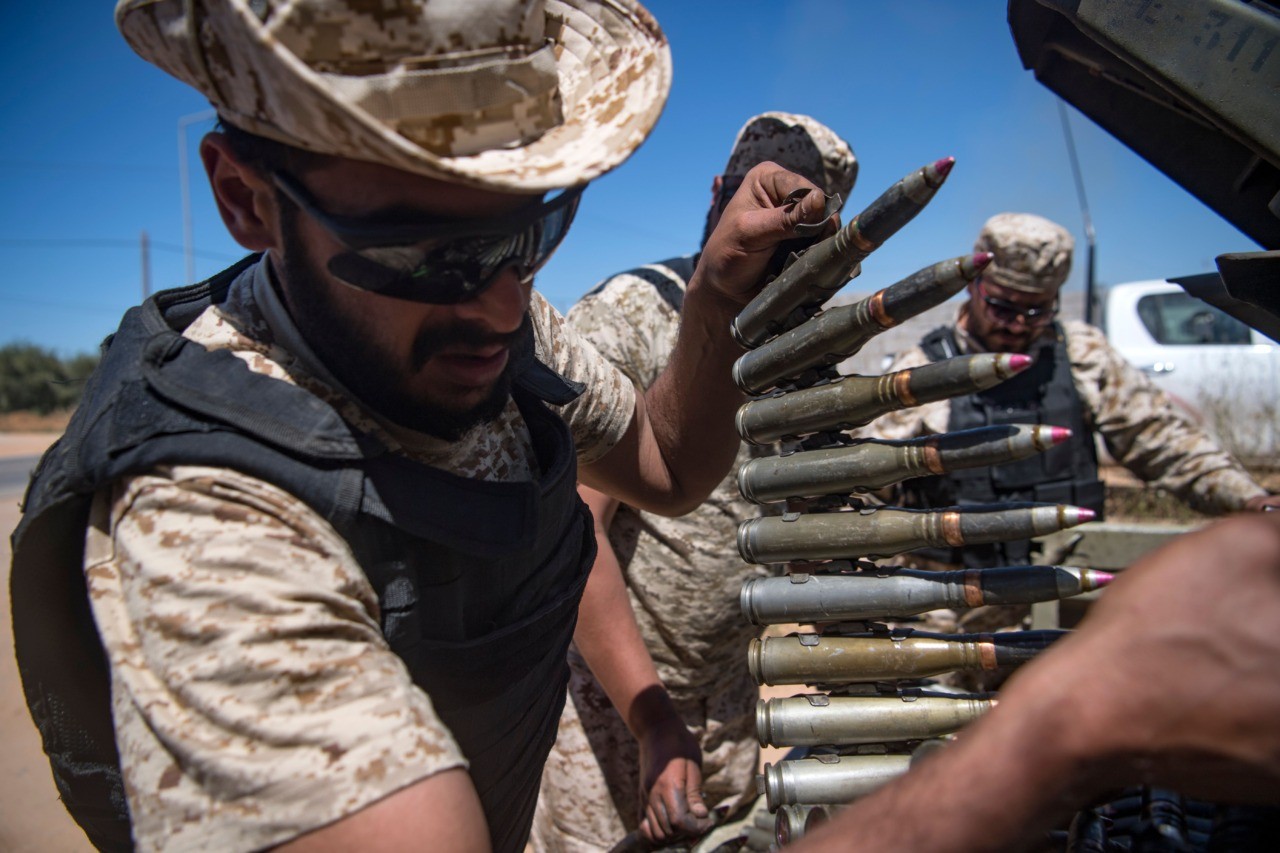 A fighter loyal to the internationally-recognised Government of National Accord (GNA) carries a bullet belt as he and fellow fighters hold a position during clashes with forces loyal to strongman Khalifa Haftar, in Espiaa, about 40 kilometres (25 miles) south of the Libyan capital Tripoli on April 29, 2019.  (FADEL SENNA/AFP/Getty Images)

The battle on the ground has also intensified. Pushing the LNA further away, the GNA forces fought house-to-house battles on Sunday.

The LNA is fighting for the breakaway government in the eastern region of Tobruk. On April, 4, Haftar and his LNA launched an offensive to take Tripoli from the GNA — headquartered in the capital.

Propped up by Russia, France, Saudi Arabia, the United Arab Emirates (UAE), and neighboring Egypt, Haftar has conquered most of Libya, including its major oil fields. The general’s supporters believe he can bring stability and take on jihadi groups operating in the North African country, namely the Islamic State (ISIS/ISIL) and al-Qaeda.

On Sunday, the Libya Observer reported that the GNA’s Interior Minister Fathi Bashagha claimed his government “has evidence that foreign aircraft have been involved in the attack on Tripoli, saying there is an investigation underway in coordination with the UN.”

“The accuracy of the air strikes on Tripoli point to warplanes owned by only two Arab countries,” Bashagha said during a press conference in Tunisia, adding that one of the countries “intervened in Libyan affairs.”

The official did not identify the two Arab countries but blasted France for continuing to provide support to Haftar. In recent weeks, France has attempted to distance itself from the warlord, denying that it is backing the LNA.

On Tuesday, a military adviser in General Khalifa Haftar’s forces revealed that Egyptian, Emirati and French military forces as well as security advisers are currently present in eastern Libya, to support Haftar’s campaign against Tripoli and protect oil fields from attacked by government forces.

The GNA interior minister revealed that the recent airstrikes by foreign aircraft have killed five people and wounded 27 others. LNA troops reportedly do not have any warplanes.

Casualties from the air attacks are expected to rise.

According to the World Health Organization, the fighting in Tripoli had killed at least 278 people and wounded over 1,300 others as of last Wednesday.

The general has funded his eastern state with a mix of unofficial bonds, Russia-printed cash and deposits from eastern banks, accumulating debt worth around 35 billion Libyan dinars ($25.18 billion) outside the official banking system.

But diplomats and banking sources say that those sources of support might be closing, as the Tripoli-based central bank, which controls the country’s energy revenues, has taken steps to curtail the operations of banks in the east.

Critics have accused the United States of endorsing Haftar after years of backing the GNA.