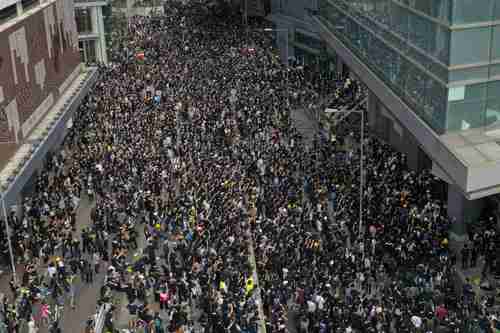 Protesters outside police headquarters in Hong Kong on Friday (SCMP)

Thousands of protesters in Hong Kong blocked police headquarters on Friday, continuing their protests triggered by the proposed “Extradition Law.”

In the hope of allowing the protests to fizzle out, the Hong Kong police took no action to disperse the protesters. However, larger protests are planned all weekend.

The proposed Extradition Law would permit Hong Kong’s government to extradite anyone in Hong Kong – citizens, businessmen, and tourists alike – to China, to be tried by Chinese Communist Party (CCP) thugs in Beijing courts. The proposed law would also permit mainland Chinese courts to request Hong Kong courts to freeze and confiscate assets related to crimes committed on the mainland and give control of those assets to the CCP in Beijing.

Officials in Hong Kong and Beijing were shocked last week by the size of the pro-democracy protests in Hong Kong. Some two million protesters filled the streets, over one-quarter of the entire Hong Kong population.

With the third protest bringing one-quarter of Hong Kong’s population out on the streets to demand that Beijing’s hand-picked leader Carrie Lam step down, pro-democracy activists in Hong Kong and Taiwan have been emboldened. For the CCP, it is a question of what action must be taken, not whether action should be taken.

When Britain handed Hong Kong over to China in 1997, there was a “one country, two systems” agreement that would allow Hong Kong to retain its own social legal and political systems. There was a strong firewall in the agreement between the Hong Kong and Beijing legal systems that the extradition law would breach.

Carrie Lam has profusely and abjectly apologized to the people of Hong Kong and announced the suspension of consideration for the extradition bill. With activists planning massive new pro-democracy demonstrations on Sunday of last weekend, Hong Kong leader Carrie Lam announced on Saturday:

After repeated internal deliberations over the last two days, I now announce that the government has decided to suspend the legislative amendment exercise, restart our communication with all sectors of society, do more explanation work and listen to different views of society.

Activists are demanding that the extradition law be scrapped completely, so this temporary suspension will not satisfy them. As positions have hardened, this issue has taken on a symbolism that goes far beyond Hong Kong.

No matter how weepy her apology was, Lam has little credibility among the demonstrators because she did not announce the complete withdrawal of the extradition law, which is a signal that it is going to be revived at a time of the CCP’s choosing.

Lam’s climbdown was a major humiliation for the CCP, and Hong Kong is Xi Jinping’s portfolio, so hardliners in Beijing are blaming Xi for the problems in Hong Kong. Xi is also being blamed for the failure so far of the U.S.-China trade negotiations. So Xi has two crises on his hands, just before the G20 talks. This weakens Xi at a time when there are hardliners in Beijing just waiting for Xi to fail so that they can take over. Xi’s position as “dictator for life” is not 100 percent secure and a palace coup would undoubtedly bring to power someone younger and even more bellicose and belligerent.

Hardliners in Taiwan will also be strengthened. China has been using a carrot and stick approach with Taiwan. On the one hand, Chinese officials say that any move toward independence would result in military reprisals. On the other hand, China has been on a continual charm offensive to convince the Taiwanese people how much better off they would be as a province of China. Part of that charm offensive has been to claim that Taiwan could have the same “one country, two systems” perks that Hong Kong has. The protests in Hong Kong have emboldened the pro-independence factions.

The protests last week were the largest that Hong Kong has seen since June 1989, when Hong Kong was still a British colony and millions in Hong Kong protested against China in support of the millions of students in the pro-democracy demonstrations Tiananmen Square, where the CCP massacred thousands of students on June 4-5, 1989.

In the perverse, delusional logic of the CCP, democracy is an ideology, not a form of government. Furthermore, the CCP sees democracy as an ideology in conflict with communism. So by the beginning of June, the CCP was so alarmed that they had to crush the protests to prevent democracy from gaining an ideological victory.

The current pro-democracy protests in Hong Kong so far are on a similar path. They are commemorating the 30th anniversary of the 1989 Tiananmen Square protests. As the number of protesters has grown into the millions, the CCP in Beijing is seeing 1989 all over again. And the pro-democracy protests are, once again, a repudiation of the “communist” ideology promulgated by the CCP.

According to unnamed CCP sources speaking to Boxun.com, Xi Jinping has already decided that “the situation in Hong Kong is in danger of getting out of control,” and that he will order a military response if the situation worsens.

These sources say that the Southern Theater Command of the People’s Liberation Army (PLA) and the Hong Kong Garrison are awaiting orders and prepared to fully respond to all possible scenarios that may arise in Hong Kong.

Since 1997, the Hong Kong Garrison is a group of several thousand PLA soldiers who are stationed in Hong Kong but meant to be “invisible.” They are confined to barracks, where they wear their uniforms but are not permitted to wear their uniforms in public. They have never left their barracks in uniform in the 22 years they have been stationed in Hong Kong, but they are prepared to emerge and take military action if ordered to do so.

We have described the similarities with the 1989 Tiananmen Square situation. However, there are significant differences as well.

The 1989 Tiananmen Square massacre took place in Beijing, a region tightly controlled by the CCP where the international media was well controlled and was shut down quickly.

However, there is virtually no control of the international media in Hong Kong. The CCP has canceled visas and deported journalists of several publications, but the events of the last two week prove that any violence in Hong Kong will immediately be known and broadcast worldwide.

However, there is a more important difference: The Tiananmen Square massacre took place in Beijing in northern China, while Hong Kong is in southern China.

Southeast China was the starting point of the last two massive Chinese civil wars. Mao Zedong’s Long March that led to the Communist revolution civil war (1934-49) started in the south. The massive Taiping Rebellion (1852-64), which was led by a Christian convert who believed he was the son of God and the younger brother of Jesus, began in the south and spread north.

Most people in the West do not make these connections, but you can be certain that the paranoid officials in Beijing are well aware of the dangers of a rebellion from the south that can spiral out of control and travel north to swallow up Beijing.

If you set the year to 2011, 2012, etc., you will see that the number of labor strikes is gradually increasing, from 184 in 2011 to 1702 in 2018. Furthermore, most of the strikes occur in southeast China, which was the starting point of the unrest that led to the last two massive Chinese civil wars.

This shows that there is already a level of unrest in southeast China, and it is been growing steadily and relentlessly for years. Xi Jinping is well aware of this.

Throughout China’s millennia of history, there have been huge, massive anti-government rebellions at regular intervals. In the last 200 years, there have been the White Lotus Rebellion (1796-1805), the Taiping Rebellion (1852-64), and Mao’s Communist Revolution (1934-49). Today, China is overdue for the next massive anti-government rebellion, and Xi Jinping is well aware that the Hong Kong pro-democracy demonstrations could be the trigger.

Xi Jinping has another worry. There is no surer way to trigger a mass rebellion in China than a failing economy. China’s economy has already taken a big hit from the new U.S. tariffs, as many businesses are relocating out of China to neighboring countries.

Hong Kong has always been China’s portal to the world financial system, and if Hong Kong becomes chaotic to the point that this portal is essentially shut down, it will cause the economic failure that will trigger the expected rebellion.

No good choices for Xi Jinping

So Xi Jinping is boxed in, with no good choices.

The Chinese are running out of time in Hong Kong and Taiwan, and they know it. The survivors of Mao’s Communist Revolution are almost all gone now, and the younger generations are increasingly anti-communist and pro-democracy and pro-independence. At the same time, China’s own economy is hugely unstable and under pressure from the U.S. tariffs. China’s entire business model, which involves stealing intellectual property from the West, is also under attack.

China cannot tolerate this situation much longer. For 30 years, China has been conducting a vitriolic hate campaign against Japan and has been planning for war to annex Taiwan and exterminate the Japanese. The Chinese do not want war with the U.S. (because they like us), but they have been preparing for it.

Carrie Lam’s weepy apology was certainly not an act of heartfelt atonement or reconciliation, since that’s not what the CCP ever does. Instead, it was an act of total desperation, an attempt to head off the worst. Over the next few weeks and months, we’ll see if she succeeded.

John J. Xenakis is author of “World View: War Between China and Japan: Why America Must Be Prepared (Generational Theory Book Series, Book 2)”