Leftist supporters of resigning President Evo Morales set fires throughout Bolivia’s major cities in protest late Sunday, unleashing what one local newspaper called a “wave of terror” in revenge against international pressure on Morales to step down.

Morales announced Sunday that he would resign and called for a new round of presidential elections – leaving unclear if he would run in them – after the Organization of American States (OAS) published a preliminary report indicating a significant likelihood that fraud occurred in the October 20 presidential election Morales allegedly won.

Morales ran for a third term this year after forcing the nation’s highest court to dissolve term limits in the nation’s constitution. 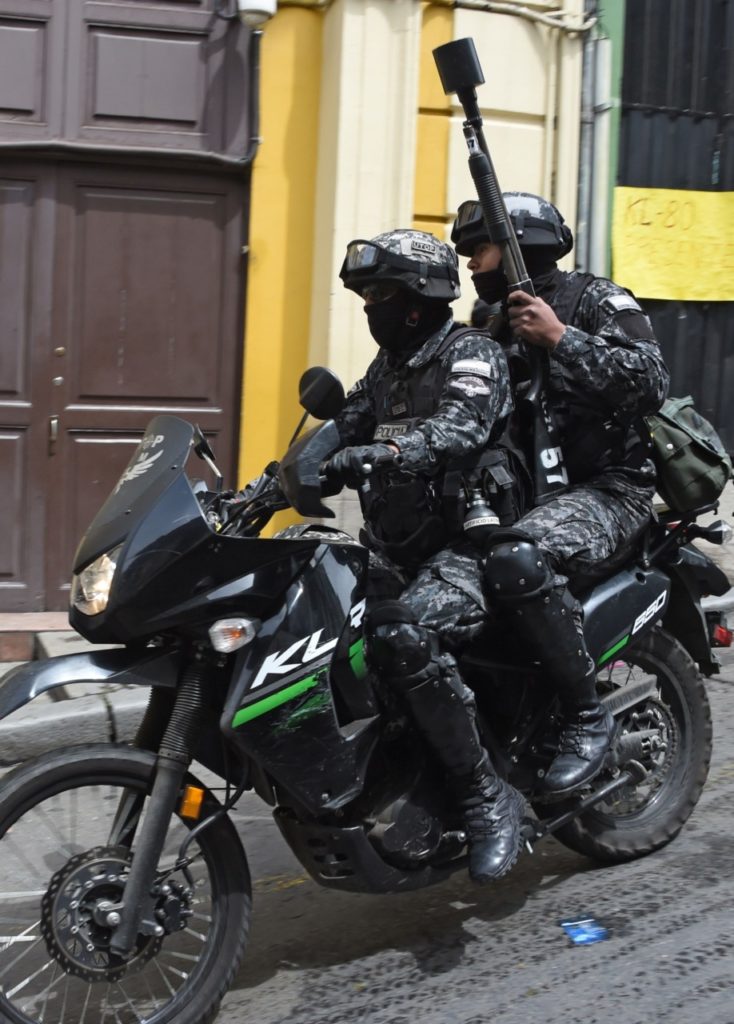 Policemen who withdrew support to ex-President Evo Morales, patrol the streets during a wave of violence in La Paz on November 11, 2019. (AIZAR RALDES/AFP via Getty Images)

Leftist mobs burned down a third of the public transit system’s buses in La Paz, the nation’s financial hub, and targeted the home of opposition leaders.

Morales and other national leftists also claimed to be victims of vandalism and mob attacks. Photos of Morales’ home showed graffiti on the outside reading “Morales, son of a whore” and journalists found the inside ransacked.

The Bolivian newspaper Página Siete was reportedly forced to postpone its morning edition Monday after its offices came under attack. The newspaper later reported that two television networks, Televisión Universitaria (College Television) and Red UNO, had to stop broadcasting amid an attack by Morales supporters.

“La Paz and El Alto are the cities worst hit by the wave of terror launched by sectors supportive of MAS [Movement Towards Socialism, Morales’ party], which began to attack businesses and, later, private homes,” Página Siete reported late Sunday.
The newspaper reported that mobs attacked the home of El Alto Mayor Soledad Chapetón and her father’s home. Chapetón is a member of the National Unity (UN) party, a member of the leftist coalition that created the Civic Community Party that fielded Morales’ main opponent in the 2019 presidential race, Carlos Mesa.

The La Paz city bus service published photos of their fleet on fire, reportedly the product of angry leftist fans of Morales.

“La Paz BUS denounces that a group of infuriated people is attacking the service platforms of the Pumakatari of the Chasquipampa route in Kupillani zone,” the bus system wrote on Twitter. “They have entered our lots and begun burning the buses.”

On Monday, the service confirmed that rioters had burned 63 buses – “a third of our fleet” – and added in a Facebook post, “it could have been worse.” Neighbors near the bus service lot reportedly took to confronting the rioters and saved the remaining fleet.

“La Paz BUS wants to thank, from the bottom of our hears, the people, the neighbors that self-organized … to defend the Pumas [buses],” the service’s Facebook post read. “Without your brave support, the damage could have been worse, much worse.”

The service posted photos of the aftermath and stated that the burning occurred at the hands of a “mob, presumably mobilized by leaders of MAS,” the socialist party.

Multiple local news outlets in Bolivia also identified the mob as Morales supporters. Morales had urged supporters to “mobilize to defend democracy, nation, life, and the vote of the people” in remarks on Sunday, the day he resigned.

“The coup plotters who attacked my home and my sister’s home, burned down houses, threatened ministers and their children with death and harassed a mayor, now also lie and try to blame us for the chaos and violence they provoked,” Morales wrote on Twitter Monday. “Bolivia and the world are witnesses to the coup.”

Morales said on Sunday that he resigned voluntarily and has not presented any evidence of a “coup.” Also complicating the “coup” accusations is the fact that, currently, no one is occupying the presidency of Bolivia, as nearly 50 MAS officials resigned after Morales.

In Cochabamba, a mob – presumably not of MAS supporters – vandalized Evo Morales’ house. 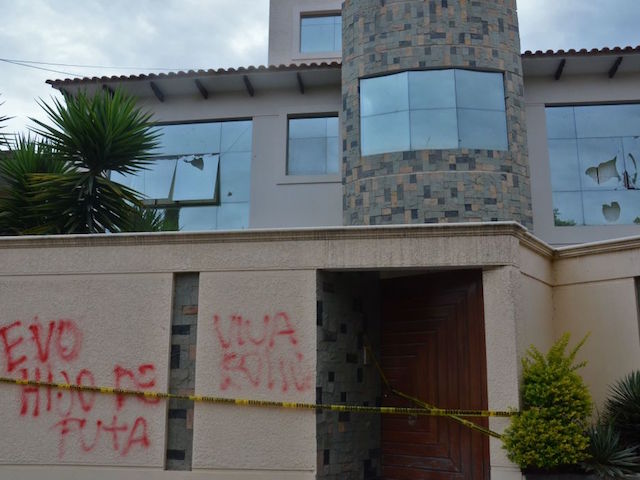 View of Bolivian ex-President Evo Morales’s home facade with a broken window and a graffiti reading “Evo son of a whore” and “Long live Bolivia” in Cochabamba, Bolivia, on November 11, 2019. (STR/AFP via Getty Images)

Morales claimed to resign on Sunday to bring peace to the country after weeks of violent attacks on protesters demanding Morales step down. Morales appeared to be heading to a run-off vote against leftist opposition leader Carlos Mesa in the October 20 election until the machines counting the votes abruptly shut down. When they turned back on, Morales was winning by a wide enough margin to stay in power.

The OAS found that, when the server counting the votes shut down, a private, unidentified server took over the vote counts. The server was not registered to the government’s electoral oversight committee or legally functioning as a vote counter, a situation that the OAS called “extremely grave.”

Morales was legally term-limited from running in the election but forced the country’s highest court to overrule the congressional ban on three-term presidents after a failed attempt at a referendum vote in 2016.