Boston Celtics star Enes Kanter condemned the conversion of the Hagia Sophia, once one of the most important Christian cathedrals in the world, in an interview Sunday, accusing Turkish President Recep Tayyip Erdogan of converting what was officially a museum in a desperate bid to win votes.

Kanter is one of Erdogan’s most famous and vocal critics and has accused his Islamist regime of, among other things, imprisoning his father as retribution for his activism. His remarks on the Hagia Sophia becoming a mosque are particularly notable given how public Kanter is about his Muslim faith.

For the entirety of the existence of the Republic of Turkey, the Hagia Sophia has been administered as a secular museum. It was built in the 500s as a Christian place of worship and forcibly converted into a mosque following the fall of Constantinople in 1453. As part of the transition from the Ottoman Empire to the Republic of Turkey in the early 20th century, founder Mustafa Kemal Atatürk secularized the country, first through the genocide of its Christians, then the removal of Islam from public areas like the Hagia Sophia.

Erdogan has spent much of his tenure as president trying to convert the Hagia Sophia into a mosque and succeeded last week. 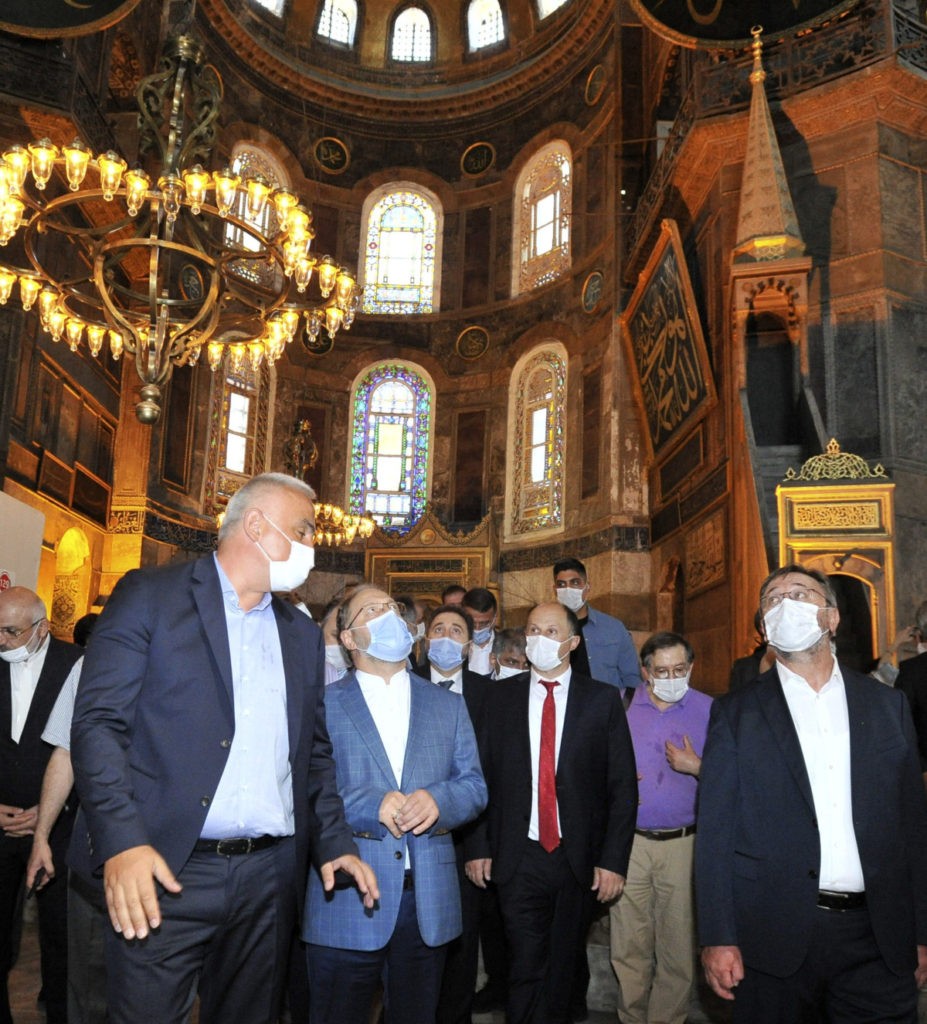 “Turkey has enough mosques. And there are so many mosques around that area and they are not even half full, so I feel like it is a big political show. People need to respect and understand other people and religions. More people need to step up, more leaders need to step up and talk about this issue,” Kanter added.

The NBA star emphasized that he would criticize the move even if Erdogan, who he has regularly condemned as a dictator, had not been the one in power when it occurred.

“If not Erdogan but another president or another prime minister did the same thing, I would exactly say the same words. There are so many Christians or Catholics living in this area so we need to respect those people,” Kanter added, speculating that Erdogan is “using Islam” because “he saw that he started to lose people” in a string of party losses last year.

We must respect ALL cultures & religions#HagiaSophia is a @UN World Heritage site celebrating religious harmony
There are so many mosques around that area not even half full
Its one of Erdogan’s games & politically motivated
Turkey moving away from modern secular roots@ALPHA_TV pic.twitter.com/QlHASAd2R9

A Turkish court ruled last week that it was legal for Erdogan to formally designate the Hagia Sophia a mosque, revoking its status as a museum, despite its registration as a UNESCO World Heritage Site, which requires that states do not exclude anyone from being allowed to visit and learn about its sites on location. The courts made their ruling after a years-long purge that saw thousands of public officials, including many judges, purged from their jobs and imprisoned for alleged support or involvement in a failed coup against Erdogan in 2016.

Following the announcement that the Hagia Sophia would officially become a mosque last week, Erdogan asserted that the “resurrection” of the mosque – despite its original status as a cathedral – “is the reignition of the fire of hope of Muslims and all oppressed, wrong, downtrodden and exploited” and would soon lead to the “return of freedom to al-Aqsa,” a mosque in Jerusalem, indicating that it would be the first step in Israel losing administrative control of Jerusalem.

Erdogan’s most fanatical supporters in Turkish media have celebrated the conversion of the Hagia Sophia as a defeat for Western culture. Ibrahim Karagül, the editor-in-chief of the Islamist newspaper Yeni Safak, proclaimed Erdogan the heir to several Ottoman rulers including “Alparslan, Kılınçarslan, Sultan Mehmed the Conqueror, Sultan Selim the Grim, those who flocked to Anatolia, altered the course of history and reshaped the region.”

Karagül added a note that “Anatolia [modern Turkey] was most Islamized during the Republic period,” a positive recollection of the Armenian genocide, which Turkey has yet to apologize for.

“I do not aim to legitimize the tyranny, but looking at it from that political gene, I see they are all one another’s continuation.” Karagül concludes in his article, titled “Hagia Sophia: Those who hold back will occupy no place in history. Western monopoly over Turkey has been shattered. Power has shifted direction. Erdoğan’s signature is that of Alparslan’s, Sultan Mehmed’s; it belongs to the same political gene. A showdown is underway between the centuries-old political legacy and the pro-tutelage wing. They’re just as disturbed as Athens. So, what’s next? We’ve just begun!”

Shortly before the failed coup against Erdogan on July 15, 2016, Erdogan allowed Muslims to perform a call to prayer at the Hagia Sophia for the first time in the history of the Republic and engage in Ramadan prayers there. The coup appeared to begin within the Turkish military; leaders published a statement using Kemalist secularist language, claiming to restore freedom by removing Erdogan’s Islamist rule. Erdogan succeeded in crushing the coup by appearing on television using Facetime and urging his supporters to violently resist the military. 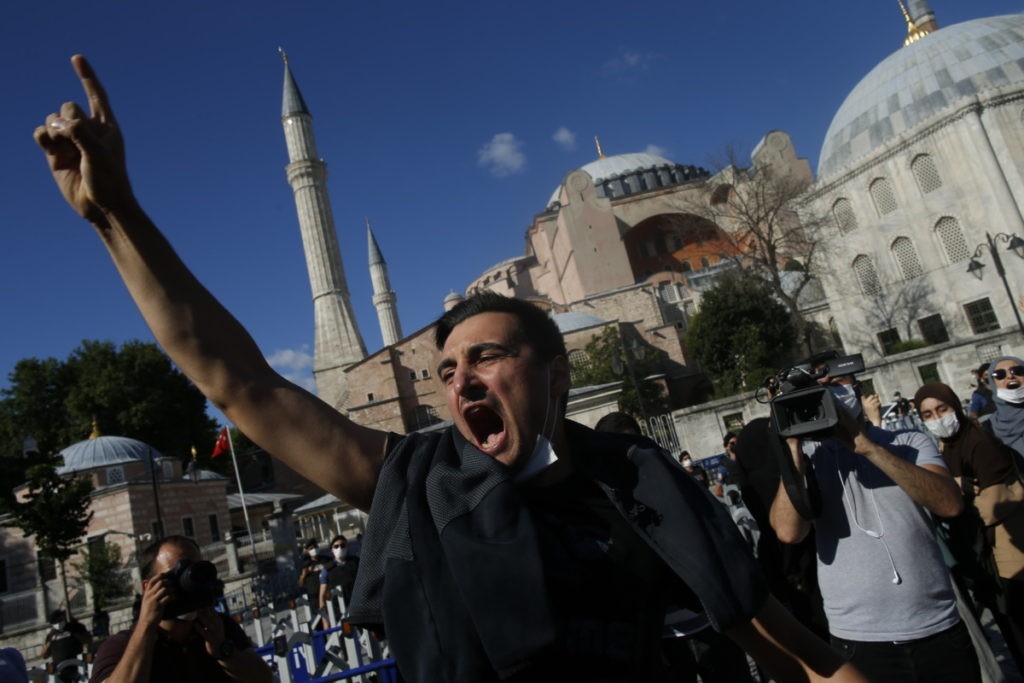 People chant slogans following Turkey’s Council of State’s decision. The ruling allows the government to restore the Hagia Sophia’s previous status as a mosque.The decision was in line with the Turkish President’s Recep Tayyip Erdogan’s calls to turn the hugely symbolic world heritage site into a mosque despite widespread international criticism, including from the United States and Orthodox Christian leaders. (AP Photo/Emrah Gurel)

Despite the clear origin of the coup and no evidence that outside elements were involved, Erdogan immediately blamed Pennsylvania Islamic cleric Fethullah Gülen for organizing the coup. Gülen, once an ally of Erdogan’s, had become a top critic of the president and since fled to the United States to self-exile. Gülen remains the leader of the Hizmet Islamic movement and has consistently denied any association with the coup.

Erdogan’s regime fired, detained, interrogated, and imprisoned tens of thousands of people in the aftermath of the coup for allegedly membership in Hizmet.

Kanter is a member of the Hizmet movement and has publicly praised Gülen, resulting in Erdogan’s government declaring him a terrorist and attempting unsuccessfully to apply for an Interpol “red notice,” which requests that member states arrest the person named, against him. Turkish courts following the purge of “Gülenists” have used following Kanter on Twitter as evidence that defendants are guilty of “terrorism.” Erdogan’s regime arrested Kanter’s father and kept him behind bars for seven years, the player contends, in an attempt to silence him. Kanter’s father was released in June.