Tuesday saw the fifth night of violent protests in cities across Tunisia – a bout of unrest that began as a commemoration of the 2011 “Arab Spring” movement, which began when a Tunisian street vendor set himself on fire to protest against government corruption.

Reuters reported on Wednesday that the protesters have revived the revolutionary chant from 2011: “The people want the fall of the regime.”

The “regime” they wish to depose today is different, as former President Zine El-Abidine Ben Ali was the first leader forced out of office by the Arab Spring movement ten years ago. Ben Ali’s 23 years in power ended with a hasty flight to Saudi Arabia, where he died in exile in 2019. The Tunisian government is still struggling to recover some $67 million that Ben Ali and his family salted away in Swiss banks.

The disillusioned protesters complain that the current government of Prime Minister Hichem Mechichi is not enough of an improvement over Ben Ali’s autocracy. Some said Mechichi and his “corrupt elite” stole Tunisia away from the revolutionaries of 2011.

The loss of “dignity” for ordinary Tunisians was a common complaint, along with the lack of economic opportunity, especially during the pandemic. Coronavirus lockdowns and curfews ordered right before the tenth-anniversary commemoration of the Arab Spring helped to spark the protests, which have escalated into exchanges of firebombs and tear gas between young demonstrators and the police. Looting and vandalism have been reported from the capital of Tunis and other cities, while human rights groups have criticized the Tunisian police for responding with excessive force.

“Over the past few days, protests have erupted in working-class neighbourhoods in at least 15 locations across Tunisia, in response to declining living conditions, poverty and endemic unemployment, especially among the country’s young people,” the UK Guardian reported on Wednesday.

“People are hungry. They want revenge against the state. I won’t lie about it, they want another revolution,” one young protester told the Guardian, noting that poor Tunisians today are telling the same stories of despair, government corruption, and insane regulations that drove 26-year-old street vendor Mohamed Bouazizi to immolate himself a decade ago. 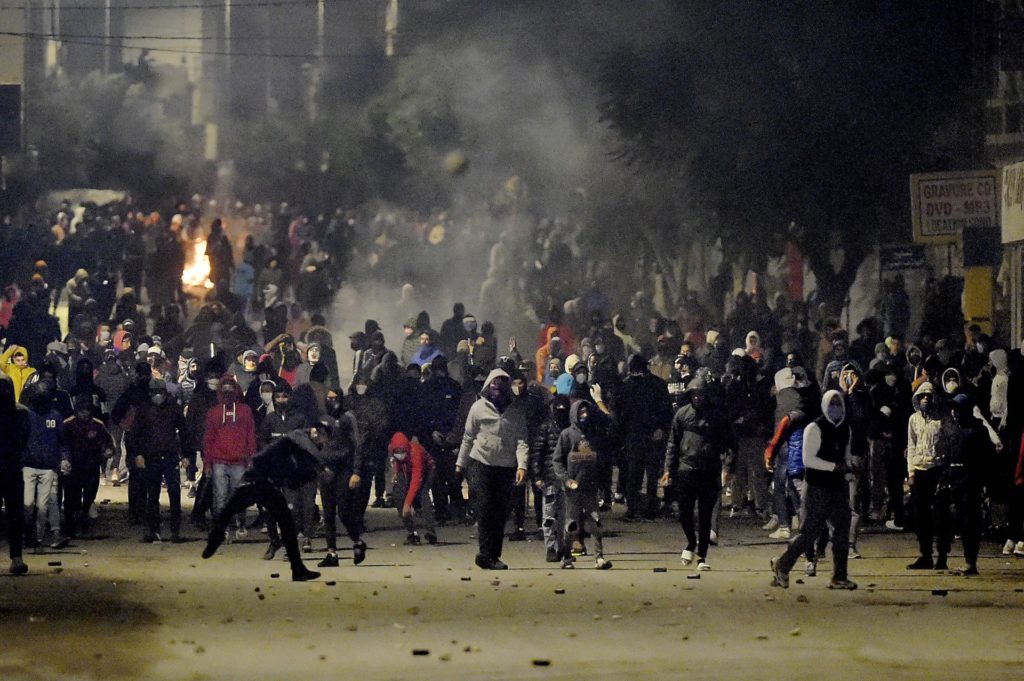 Tunisian protesters block a street during clashes with security forces in the Ettadhamen city suburb on the northwestwern outskirts of Tunis on January 18, 2021, amidst a wave of nightly protests in the North African country. The social unrest comes at a time of economic crisis, worsened by the pandemic, that has sparked rapid inflation and high youth unemployment and led many people to leave Tunisia. (FETHI BELAID/AFP via Getty Images)

Bouazizi was especially upset about corrupt and overbearing government officials harassing his tiny fruit-selling operation; in the final indignity, police confiscated the scale he employed to weigh his produce because he was selling without a permit. Tunisian protesters today say it is still impossible to get anything done without paying copious bribes to public officials.

“The only positive thing we got out of the revolution was the freedom to say anything we wanted. Maybe we understood freedom wrong, because we’ve made no progress in the last 10 years,” a frustrated student with dreams of fleeing Tunisia told the New York Times (NYT) on Tuesday.

“Nearly a third of young people are jobless, public services are foundering and corruption has increasingly infiltrated daily life. Opportunities for most people have become so scant, especially in Tunisia’s impoverished interior, that at least 13,000 Tunisian migrants gambled their lives crossing to Italy by boat just in the last year,” the NYT noted.

Ironically, the leading populist critic of the current government is Abir Moussi, who was once an official in the Ben Ali regime and was physically attacked when she defended him in court. She now heads up the leading opposition party, the Free Destourians, whose platform mixes socialism, secularism – Tunisia’s Islamists have threatened to behead her – and ruminations that maybe life under Ben Ali wasn’t so bad after all.

“Under Ben Ali, everything was honey,” one of Moussi’s ardent supporters told the NYT. He said Moussi is “perfect” because he sees her “supporting poor people and always criticizing the government.”

Prime Minister Mechichi gave a televised address on Tuesday in which he acknowledged popular anger as “legitimate” but advised Tunisians to be wary of “saboteurs among you,” by which he meant the violent protesters.

Tunisia’s president, Kais Saied,” posted his own video address on Tuesday in which he told Tunisians to focus on their real enemy: “the Jews who are stealing.”

Saied has previously said Tunisia is in “a situation of war with Zionism” and those who seek normalization with Israel are guilty of “treachery.” He won 73 percent of the vote in the 2019 runoff election for president. 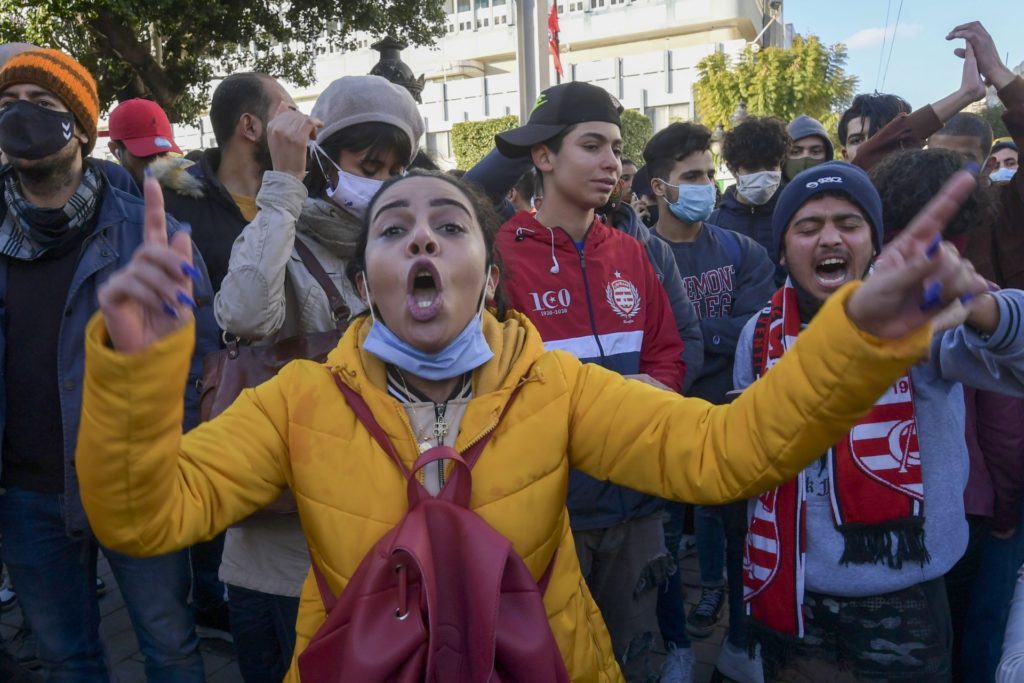 Tunisian protesters shout slogans during an anti-government demonstration on the Habib Bourguiba avenue in the capital Tunis, on January 19, 2021. Tunisia braced for further protests after hundreds were arrested in four nights of street clashes between riot police and disaffected youths in cities across the North African country. (FETHI BELAID/AFP via Getty Images)