Afghan media reports indicated objects seen falling from a massive U.S. Air Force C-17 after it took off from Kabul International Airport on Monday morning were desperate people plunging to their deaths after they attempted to cling to the departing aircraft.

Video on social media shows people falling to their deaths from an aircraft that had taken off from Kabul airport, presumably having attached themselves from the outside. pic.twitter.com/9KHeiuawXj

BREAKING Two people fell from the landing gear of a USAF C-17 taking off from Kabul this morning according to Aśvaka – آسواکا News Agency https://t.co/R5ZEEh4TWo pic.twitter.com/IdFbupvG8P

Afghanistan’s Khaama Press said three people appeared to fall from the U.S. transport plane as it climbed away from the airport. A U.S. official similarly told the Wall Street Journal (WSJ) on Monday “at least three Afghans clinging to the side of an Air Force jet evacuating personnel from the airport were run over and killed.”

“Separately, witnesses reported seeing three bloodied bodies, including that of one woman, lying on the ground just outside the terminal building,” the WSJ reported. 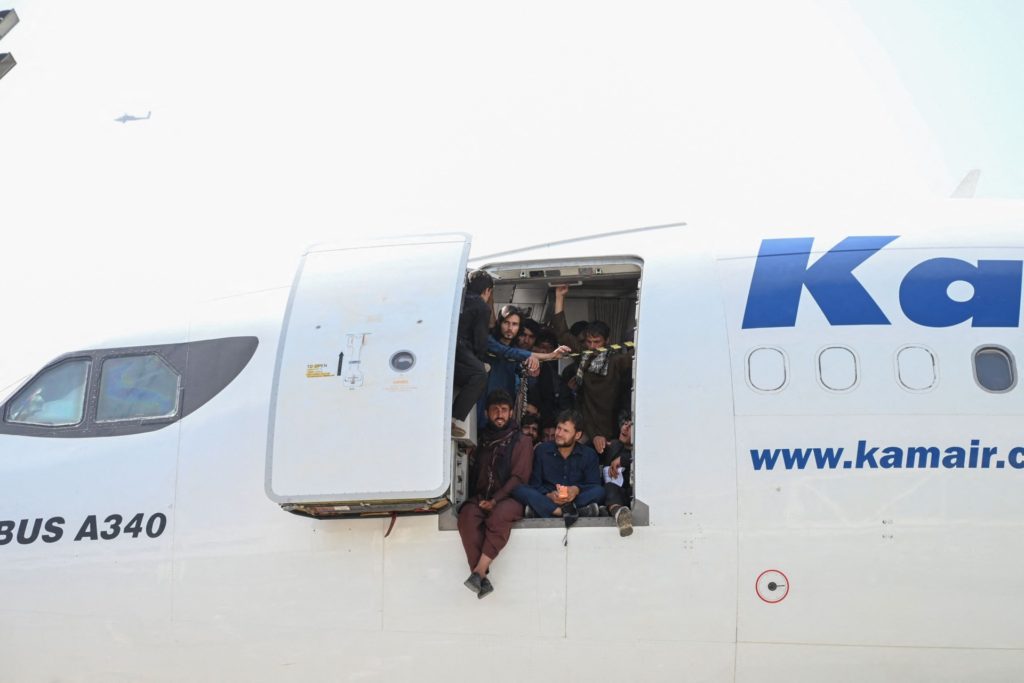 Afghan people climb up on a plane and sit by the door as they wait at the Kabul airport in Kabul on August 16, 2021, after taking over the civil runway. (WAKIL KOHSAR/AFP via Getty Images)

Stunning photos and video from the Kabul airport on Sunday and Monday showed thousands of people swarming around planes on the tarmac.

Shots were reportedly fired by U.S. military personnel to disperse the panicked crowds. The WSJ said Taliban fighters have also entered the airport perimeter and fired shots, terrifying the civilians massed there.

Video: People run on tarmac of Kabul international airport as a US military aircraft attempts to take off. pic.twitter.com/9qA36HS0WQ

Flight controllers on Sunday said a U.S. Air Force C-17 pilot reported there were 800 people packed into a single jet.

“Good job getting off the ground!” one of the controllers responded.

CNBC quoted Atlantic Council senior fellow Kamal Alam, currently trapped in Afghanistan, explaining that panic erupted at the Kabul airport due to reports that senior officials were fleeing the country on private flights and bringing “substantial amounts of cash” with them, including former President Ashraf Ghani. 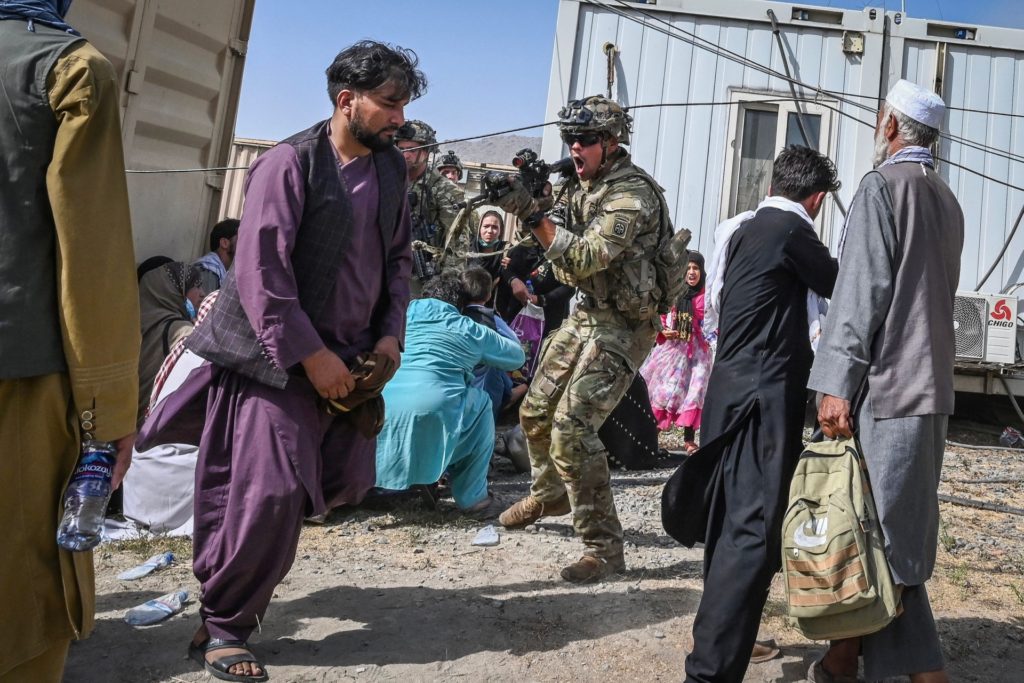 A U.S. soldier (C) point his gun towards an Afghan passenger at the Kabul airport in Kabul on August 16, 2021, after a stunningly swift end to Afghanistan’s 20-year war, as thousands of people mobbed the city’s airport trying to flee the group’s feared hardline brand of Islamist rule. ((WAKIL KOHSAR/AFP via Getty Images)

“All the VIPs were being allowed to fly out first, all their cash was being transported first … whether on commercial airlines or private jets from [an] unnamed Gulf country. So people were seeing this, there was a lot of resentment and anger from the airport security, and that is really where the rot started. That’s when people started saying this government and this president is not worth defending, let’s get out of here,” Alam said.

The U.S. military temporarily suspended operations at the airport on Monday so it can clear civilians from the runways and “make sure the airfield is secure.”