United Nations officials said Sunday they have obtained pledges from the Taliban to protect humanitarian aid workers operating in Afghanistan and to give relief agencies full access to Afghans in need of food, shelter, and medical treatment.

U.N. Under-Secretary-General for Humanitarian Affairs Martin Griffiths met with the Taliban’s nominal leader, Mullah Baradar, and other officials of the theocratic regime in Kabul on Sunday.

The Taliban responded by welcoming continued foreign aid and said it would assist with “cooperation and provision of needed facilities.”

U.N. spokesperson Stephane Dujarric said the Taliban promised Griffiths they would “cooperate with the humanitarian community to ensure assistance is delivered to the people of Afghanistan.”

Dujarric said further meetings with the Taliban were planned for the coming week, while Secretary-General Antonio Guterres will hold a “high-level ministerial meeting to address the growing humanitarian needs” in Afghanistan.

The U.N. spokesman called for increased funding so “the lifesaving humanitarian operation” in Afghanistan may continue. The U.N. believes roughly half of the Afghan population requires humanitarian assistance to survive, and more than half of its children are at risk of malnutrition.

This call for increased aid will likely encounter resistance from donors who ask why they should support the brutal “Islamic Emirate of Afghanistan” regime by delivering food and medicine to its citizens or why Western nations should cover that expense while Communist China reaps a fortune by exploiting Afghanistan’s mineral wealth in partnership with the Taliban.

Also, humanitarian agencies have noted that a combination of swift Western sanctions and Taliban government ineptitude have shut down Afghanistan’s banking system, so unless entities like the World Bank and International Monetary Fund change course and recognize the Taliban regime as legitimate, financing aid operations and paying local workers will be extremely difficult.

News agency AFP reported Sunday that several unnamed relief organizations are “in talks with the Taliban to continue their operations,” and some have “received security guarantees for existing programs.” 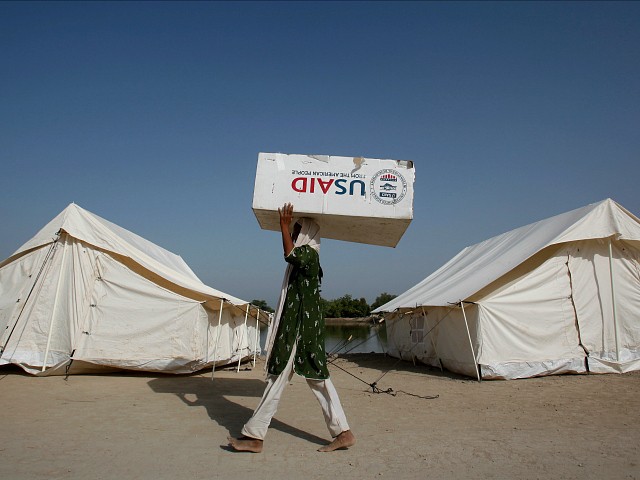 The Wall Street Journal (WSJ) quoted USAID, which said more funds could be made available for Afghanistan relief, provided the Taliban does not interfere with aid workers:

The administration also is considering tapping accounts available in other programs, the officials said, such as the State Department’s $4.4 billion International Disaster Assistance fund and the $3.4 billion Migration and Refugee Assistance program.

The senior officials said the Taliban’s treatment of the people distributing the aid—foreign workers and Afghans—will be a critical factor in how the U.S. and its allies regard the government forming in Afghanistan. U.S. officials repeatedly have cast doubt on the likelihood of formal U.S. recognition.

“Consistent with our sanctions on the Taliban, the aid will flow through independent organizations,” a USAID spokeswoman said. “And we expect that those efforts will not be impeded by the Taliban or anyone else.”

Representatives from both parties in the U.S. Congress told Reuters on Friday there would be significant bipartisan resistance to humanitarian funding that is not kept completely out of Taliban hands:

“It would be difficult to convince members of Congress to do anything that would appear to be supporting the Taliban government,” said a senior Senate Democratic aide, citing the absence of oversight and a reluctance “to support a government that is anathema to us.”

“Republicans would absolutely not support giving money to the Taliban,” the Republican aide said, saying they do not want to provide any money until Americans and Afghans who worked with the United States can leave Afghanistan.

The Republican aide added that U.N. agencies should be willing to meet “strict conditions” on how American funds for Afghanistan operations are spent, while the Democrat aide doubted it would be possible to ensure the money does not end up in the hands of Taliban officials supervising schools, hospitals, and other civic programs.

“This is a new world. I can’t think of any case in which a terrorist group that’s already designated became the power in charge of a full country,” former Obama administration Treasury official Adam M. Smith remarked to the New York Times (NYT) Friday.

“We need to find a way to encourage goods and services into Afghanistan, or you’re going to have 30 million Afghans having collateral consequences here and that’s going to be disaster,” Smith added, effectively predicting defeat for sanctions against the Taliban because it will use its own population as hostages.

The NYT noted the Taliban is “notorious for pilfering the wealth of Afghanistan’s citizens with exorbitant taxes, and an influx of food or medicine from abroad would be an opportunity for seizing and selling them to raise funds,” so even a small step like allowing remittances from abroad to be wired to Afghan civilians – a concession the Biden administration made last week – will end up putting U.S. dollars into Taliban coffers.

The same dilemma awaits European leaders. In an interview with Germany’s Bild on Monday, Taliban spokesman Zabihullah Mujahid said the regime is looking forward to German investment in Afghanistan’s infrastructure, including contributions for food and medicine.

“The next government will be based on a friendly relationship with Germany. We would like Germany to support us in the humanitarian sector, and we need help in the health care sector, in the area of education and with the infrastructure,” Mujahid said, inviting German Chancellor Angela Merkel to visit as soon as possible.