Heavily veiled and robed women held a rally in support of the Taliban at the Shaheed Rabbani Education University in Kabul on Saturday, the 20th anniversary of the 9/11 attacks. 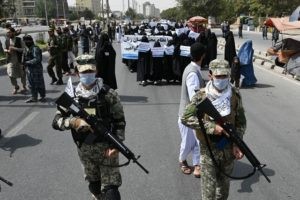 The demonstrators embraced Taliban rule and sharia law, while waving placards and giving speeches that rejected Western notions of women’s rights and heaping scorn upon Afghan women who fled the country to escape the brutal Taliban regime. 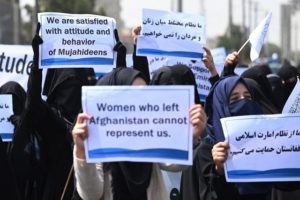 “We are satisfied with the attitude and behavior of Mujahideens” was a widely-used slogan on banners and placards at the rally: 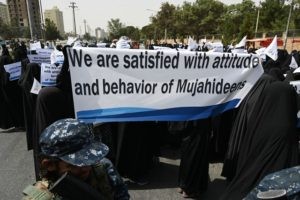 AFP described the demonstration, which included about 300 shrouded women, a “carefully orchestrated publicity stunt” intended as a response to several protests against the Taliban regime led by women over the past week. Taliban thugs used guns, whips, and clubs to disperse those protests. 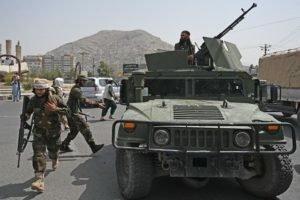 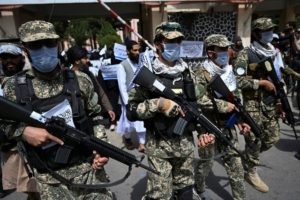 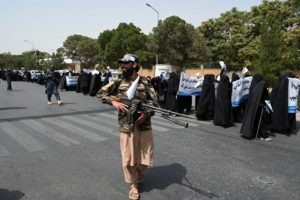 The demonstrators filled an auditorium at Shaheed Rabbani Education University, many of them clutching white Taliban flags, and listed to female speakers deliver angry tirades against the women who demonstrated against Taliban rule last week.

Taliban officials said the demonstrators were “students,” and claimed they organized the demonstration on their own, but AFP noticed the audience was padded out with “young girls clearly too young for university.” 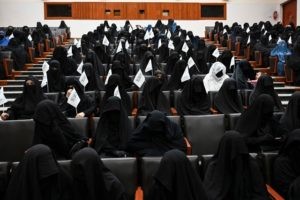 AFP quoted from a few of the speeches:

“We are against those women who are protesting on the streets, claiming they are representative of women,” said the first speaker, covered head to toe.

… A student named Shabana Omari told the crowd she agreed with the Taliban’s policy that women should cover their heads.

“Those not wearing the hijab are harming all of us,” she said, referring to the headscarves worn by many Muslim women.

“The hijab is not an individual thing.”

Omari concluded her speech by leading a chorus of “Allahu Akbar”, or “God is greatest”.

Another speaker, Somaiya, said history had changed since the Taliban came back.

“After this we will not see ‘bihijabi’ (people not wearing headscarves),” she said.

“Women will be safe after this. We are supporting our government with all our strength.”

Reuters talked to some people on the streets of Kabul on Saturday who blamed their problems on the United States, praised the Taliban for bringing “security” to the country, and hoped Allah would give the Taliban “strength to maintain this forever.”

“After the Sept 11 events took place, the Americans were in our country for 20 years for their own benefit. They took the benefits they had in mind for 20 years while we did not get any benefit from them. They have left the country in a state of confusion,” a young Kabul resident complained.

“In the presence of America, there was a lot of commotion in our country. Women were unveiled. The majority of our youth fled, a number were martyred and a number of others were afflicted by America through war and misery,” said another.

The Washington Post noted the Taliban did not use the 20th anniversary of 9/11 as the day to officially roll out its new government and cabinet, as it had been widely speculated they would do. However, the Taliban did repeat its call on Saturday for civil servants to return to work… provided they are male.

A female civil servant, requesting anonymity because she feared for her safety, told the Washington Post she was sent home by armed Taliban guards when she tried to visit her office a few days ago. She was told “no decision” had been made about whether to pay her salary.