The Iranian regime organized massive rallies on Thursday to celebrate the anniversary of the 1979 seizure of the U.S. Embassy in Tehran – the beginning of a 444-day hostage crisis touted as a great victory of the Islamic revolution in Iran.

Salami delivered a speech about the evils of U.S. imperialism while an oversized American flag was “spread on the street so protesters could stomp on it,” as RFE put it. American and Israeli flags were burned at other rallies amid chants of “Death to America” and “Death to Israel.”

Salami claimed the U.S. has “used all means, policies, and strategies to surrender the Iranian nation,” but despite these efforts, “the Islamic Republic has become stronger.” The sizable number of Iranians who have been protesting against their government’s mismanagement of the economy, education, and the coronavirus pandemic might disagree. 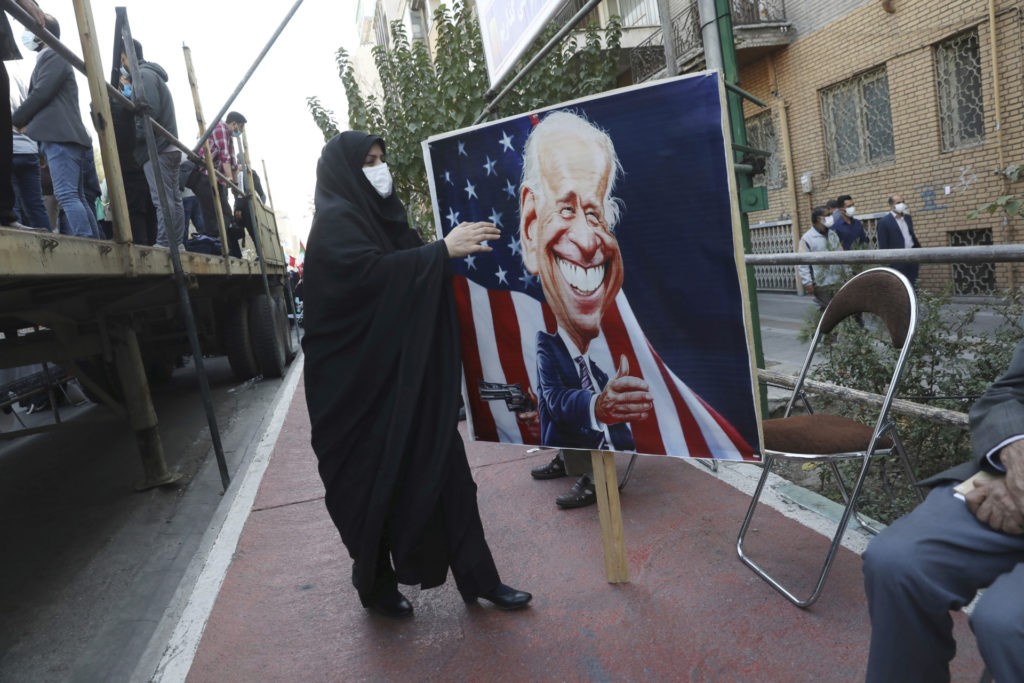 A demonstrator carries a banner with a caricature of the U.S. President Joe Biden in a rally in front of the former U.S. Embassy commemorating the anniversary of its 1979 seizure in Tehran, Iran, Thursday, Nov. 4, 2021.  (AP Photo/Vahid Salemi) 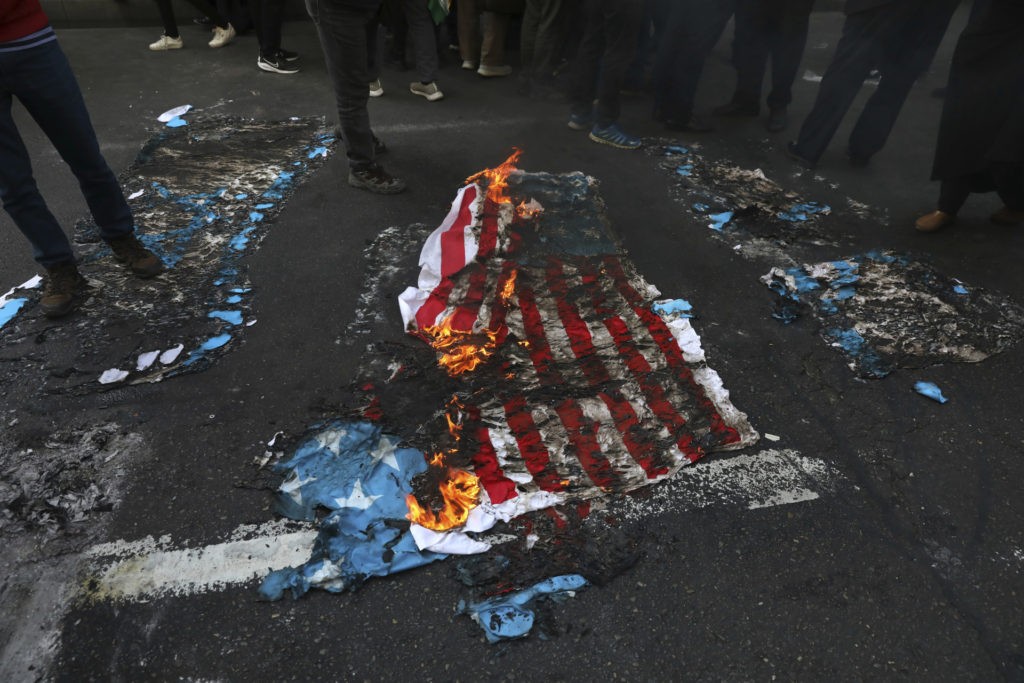 A mock U.S. flag is set on fire by demonstrators in a rally in front of the former U.S. Embassy commemorating the anniversary of its 1979 seizure in Tehran, Iran, Thursday, Nov. 4, 2021. (AP Photo/Vahid Salemi)

A statement from the Iranian government restated its support for Palestinian, Lebanese, and Yemeni terrorist movements, along with Iran’s proxy forces in Iraq and Syria, and the restless Shiites of Bahrain.

Tehran saluted all of these movements as fellow soldiers in the “powerful army of the Islamic Ummah” fighting against the “system of global domination and Zionism” perpetuated by the United States, Israel, and their allies. The November 4 statement also condemned Muslim nations that normalized relations with Israel during former President Donald Trump’s Abraham Accords initiative.

Iran’s PressTV noted that November 4 is known as “National Day of the Fight Against Global Arrogance” and “National Student Day,” a nod to the student “activists” who overran the U.S. Embassy in 1979.

November 4 is also marked on Iranian regime calendars as the day the godfather of the Islamic revolution, Ayatollah Ruhollah Khomeini, was exiled to Turkey in 1964, and the day of a 1978 Islamist student protest that was brutally suppressed by the Shah of Iran.

“Last year’s events were canceled due to an increase in COVID-19 [Chinese coronavirus] infections, this year’s events are being held across the nation while people observe health protocols,” PressTV said.

As RFE pointed out, Iran’s vicious November 4 celebrations were held the day after Iran agreed to renewed nuclear negotiations with the United States and European Union. 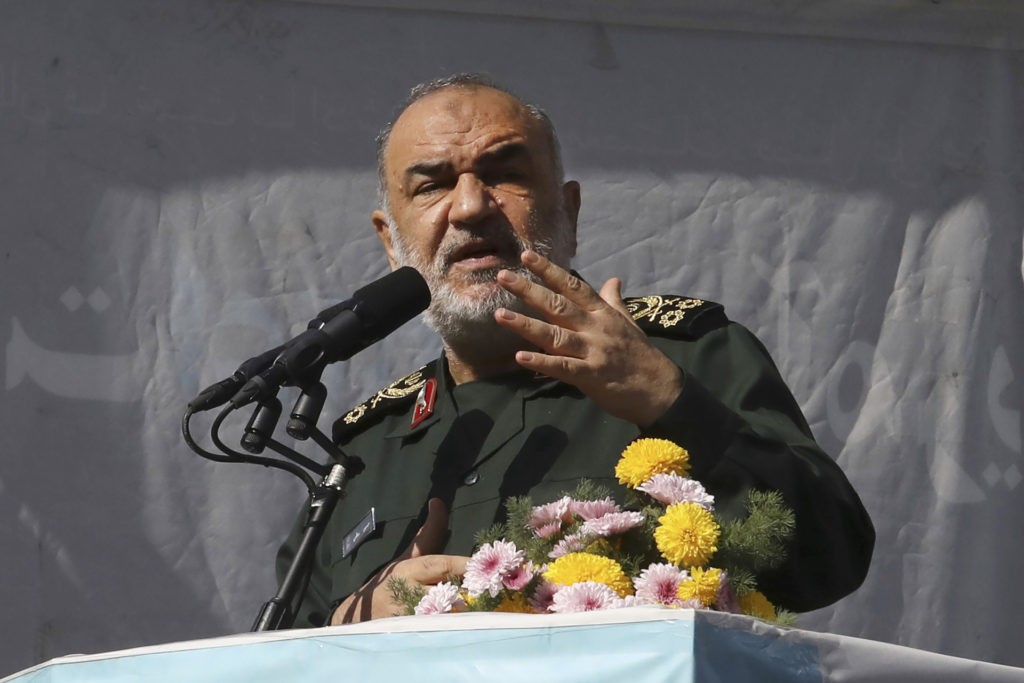 Iranian President Ebrahim Raisi gave a defiant address on state television on Thursday in which he pledged to “stand against excessive demands which could damage our nation’s interests.”

Raisi said he would not budge from Iran’s demand for unilateral and unconditional “lifting of all U.S. sanctions and neutralization of sanctions.”

“The negotiations we are considering are result-oriented ones. We will not leave the negotiating table… but we will not retreat from the interests of our nation in any way,” he declared.

Iran’s chief negotiator, Deputy Foreign Minister Ali Bagheri Kani, made the same point on Wednesday when agreeing to restart “the negotiations aiming at removal of unlawful and inhumane sanctions on 29 November in Vienna.”

“We believe it remains possible to quickly reach and implement an understanding on a mutual return to compliance with the JCPOA by closing the relatively small number of issues that remained outstanding at the end of June when the sixth round concluded,” the Biden State Department responded.