Ukraine requested an emergency meeting of the U.N. Security Council (UNSC) on Monday night in response to Russia’s military incursion.

The rotating presidency of the UNSC happens to be held by Russia at the moment.

At the meeting, the U.S. denounced ceasefire violations by Russian-supported separatists in eastern Ukraine and warned other members, “The risk of major conflict is real and needs to be prevented at all costs.”

U.S. Ambassador Linda Thomas-Greenfield said Russia was committing “a clear violation of international law” and seeking a “pretext” to push further into Ukraine and destabilize the entire region. She noted Putin’s claim of all former Russian Imperial territories could be an excuse to invade most of Eastern Europe, from Estonia to Finland. 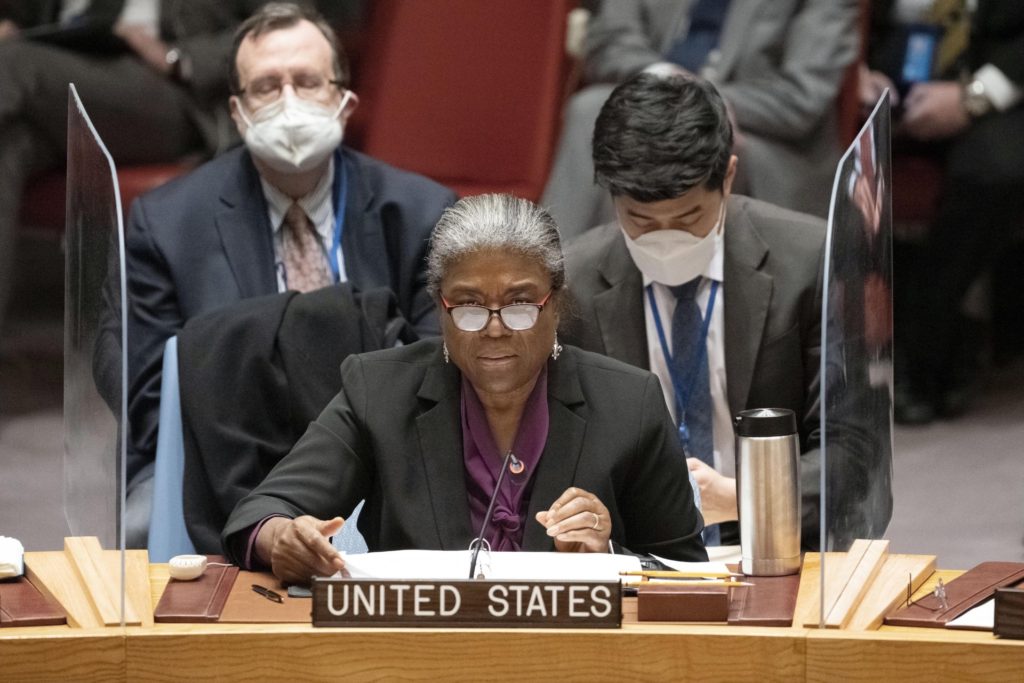 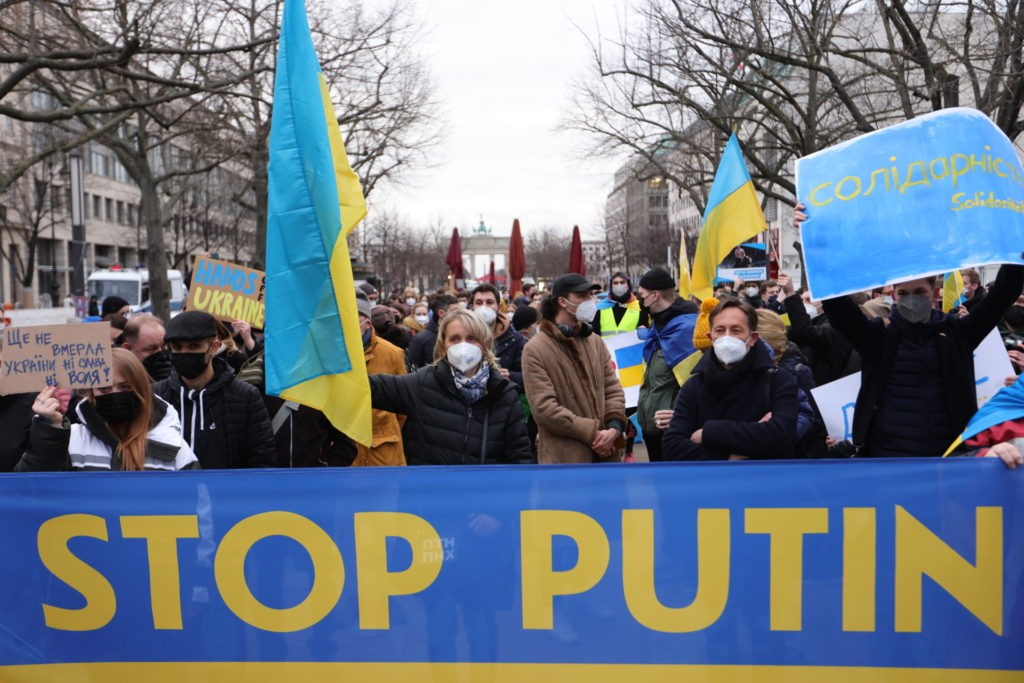 A woman holds a Ukrainian flag next to a banner reading stop Putin as youth groups protest Ukraine intervention with human chain in front of the Russian Embassy on February 22, 2022 in Berlin, Germany. (Omer Messinger/Getty Images)

“Already, Russian proxies dramatically increased shelling and artillery fire over the weekend, killing Ukrainian civilians and soldiers. If Russia invades Ukraine even further, we will see a devastating loss of life. Unimaginable suffering. Millions of displaced people will create a refugee crisis across Europe,” she warned. 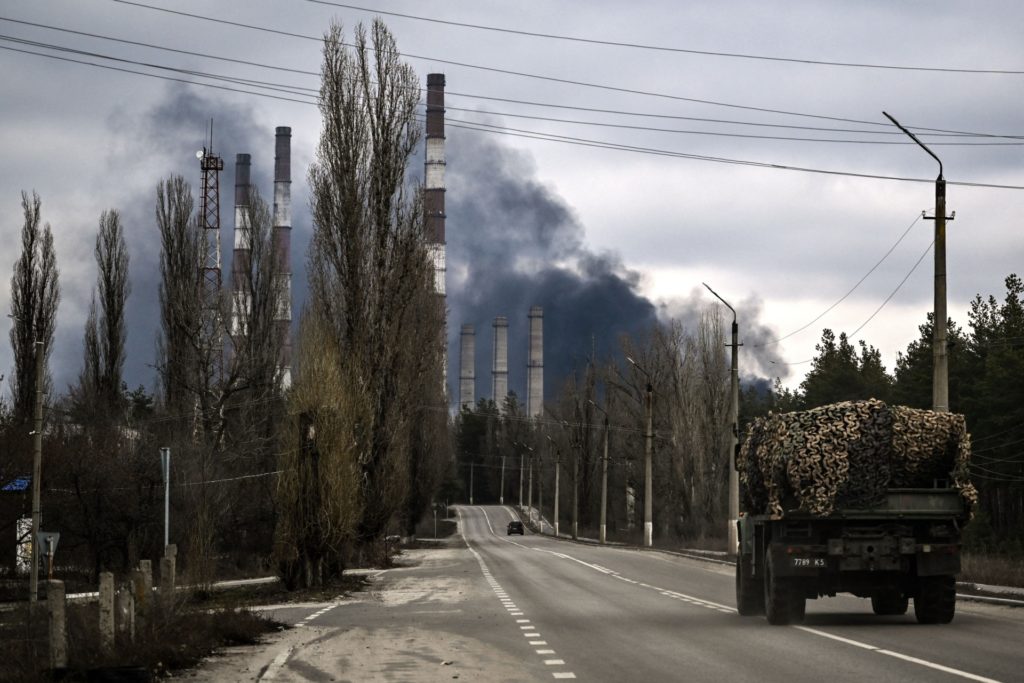 A military vehicle drives on a road as smoke rises from a power plant after shelling outside the town of Schastia, near the eastern Ukraine city of Lugansk, on February 22, 2022, a day after Russia recognized east Ukraine’s separatist republics and ordered the Russian army to send troops there as “peacekeepers.” (ARIS MESSINIS/AFP via Getty Images)

“President Putin is testing our international system, he is testing our resolve and seeing just how far he can push us all. He wants to demonstrate that through force, he can make a farce of the U.N.,” Thomas-Greenfield said. 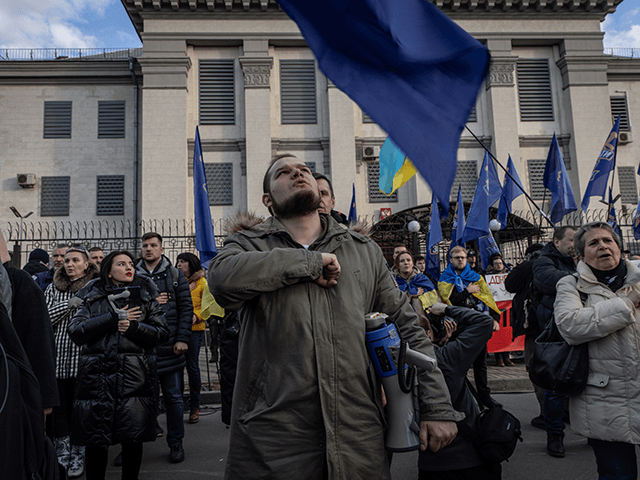 People sing the Ukrainian national anthem during a protest outside the Russian Embassy on February 22, 2022 in Kyiv, Ukraine. (Chris McGrath/Getty Images)

Ukrainian Ambassador Sergei Kislitsa went even further and said the United Nations is “sick” with a “virus spread by the Kremlin.”

U.K. Ambassador Barbara Woodward said Russia threatened to unleash “the forces of war, death, and destruction on the people of Ukraine.”

“The humanitarian impact will be terrible. We know that women and children will suffer most,” she said.

French Ambassador Nicolas de Riviere blasted Russia for “choosing the path of challenge and confrontation, despite the relentless efforts for de-escalation over the past weeks and days.”

“We will continue these efforts and call on Russia to match its words with deeds when it claims to be in favor of dialogue and to reverse the decision to recognize the separatist entities,” he said.

Russia enjoyed tacit support from China at the UNSC meeting, as Chinese Ambassador Zhang Jun refrained from criticizing the Russian incursion into Ukraine, or even mentioning Russia’s actions at all. Zhang merely encouraged all sides to “exercise restraint and avoid any action that may fuel tensions.”

Russian Ambassador Vasily Nebenzya pushed back by dismissing the “very emotional statements, categorical assessments and far-reaching conclusions” made by other UNSC members.

Nebenzya said it was the West that threatened to escalate Russia’s “peacekeeping” mission into a wider conflict, urging America and European representatives to “come to their senses, put aside their emotions and not make the situation worse.”

The Russian ambassador told UNSC that under agreements signed with the newly-recognized (by Moscow) Luhansk and Donetsk People’s Republics, “the functions of maintaining peace in their territories will be carried out by the Armed Forces of the Russian Federation.”