The political crisis triggered by months of socialist economic collapse in Sri Lanka continued on Wednesday with violent clashes between protesters and soldiers, resulting in upwards of 80 people hospitalized in one day and the military announcing soldiers were “empowered” to attack civilians if deemed necessary.

The Democratic Socialist Republic of Sri Lanka, governed for the better part of the past two decades primarily by the populous Rajapaksa family, began to run out of food, medicine, oil fuels, natural gas, and nearly every other basic good in March, the result of lavish government spending and the imposition of “green” policies that banned chemical fertilizer use.

The fertilizer ban resulted in Sri Lanka becoming dependent on imports for food, rather than growing its own – which turned disastrous when Sri Lanka ran out of foreign currency reserves and defaulted on its foreign debt in April. Humanitarian organizations have documented a marked increase in signs of malnutrition across the country, particularly among children. 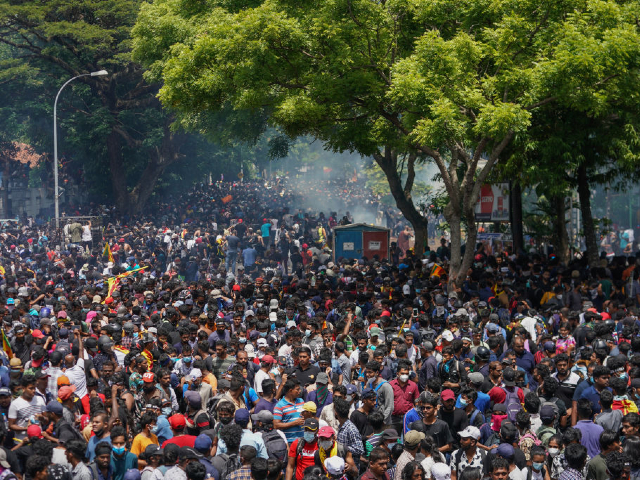 Anti-government protesters take over the Prime Ministers office in Sri Lanka. Police use a large amount of tear gas and water cannons to disperse the crowd which failed to stop the protest. July 13, 2022 Colombo, Sri Lanka (Photo by Thilina Kaluthotage/NurPhoto via Getty Images)

Protesters have demanded the resignation of President Gotabaya Rajapaksa for months, escalating the occupation of public spaces in Colombo, the national capital, until taking over the president’s and prime minister’s residences this past weekend. Protesters also demanded the resignations of every cabinet member, the prime minister, and lawmakers. The protesters initially succeeded in convincing former Prime Minister Mahinda Rajapaksa to resign after burning down his house in May; protesters burned down current Prime Minister Ranil Wickremesinghe’s private home this past weekend, but he remains in office and is also acting president.

Gotabaya Rajapaksa fled the country this weekend after protesters swarmed his palace. He landed in the Maldives initally, where throngs of Sri Lankan expatriates organized protests demanding that he leave that country, as well. As of Thursday, Rajapaksa is in Singapore – and has yet to formally tender his resignation, causing frustration and confusion among the public.

In an address following Rajapaksa’s abandonment of the country, Wickremesinghe delivered an address stating that the Parliament was hoping to convene to replace the president officially on July 20. He also imposed a nighttime curfew and blocked trains from out of town from entering Colombo to prevent the number of protesters from growing.

Chaos appeared to continue to dominate Colombo on Wednesday despite these measures. The local Daily Mirror newspaper published a video, for example, of protesters appearing to take over a construction excavator and using it in an ultimately unsuccessful attempt to break through barricades surrounding the Parliament.

A video circulating on social media shows a protestor taking over a JCB construction equipment vehicle with the aim of utilizing it to break the barricades near the Parliament entrance. #DailyMirror #SriLanka #SLnews pic.twitter.com/mzZ6QvK3g6

At a protest in Battaramulla, a Colombo suburb, a mob attacked police and military units attempting to disperse the protest, initially leaving at least one police officer “seriously injured” and another officer, a soldier, also hospitalized. At least two other soldiers were “brutally and inhumanely assaulted” at the incident, Sri Lanka’s News First reported, adding that the protesters reportedly used steel poles to beat the soldiers until they lost consciousness, and then the rioters stole at least two assault rifles. 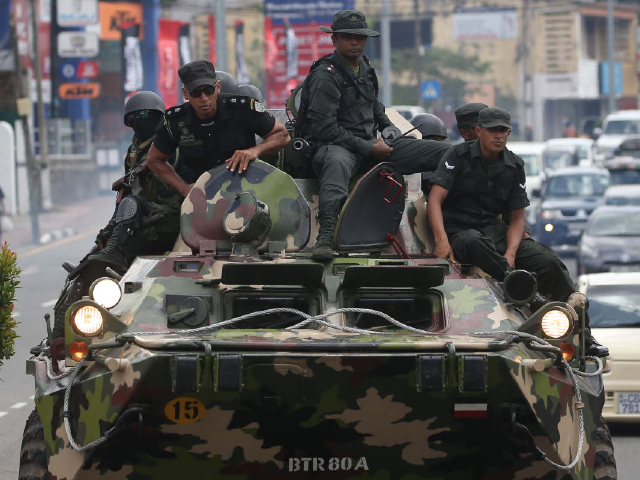 Army soldiers travel in armored vehicles along a road in the Battaramulla area near Colombo On July 14, 2022. The government has declared an emergency, and a curfew is in the Colombo district from 12 noon today (14) to until 5 am tomorrow (15). (Photo by Pradeep Dambarage/NurPhoto)

By Thursday, army officials indicated that at least 16 soldiers were hospitalized in the Battaramulla brawl. In an extended statement, Sri Lanka’s armed forces used the opportunity to emphasize that the events in Battaramulla were the exception after months of thousands of civilians organizing protests.

“It is worthwhile to mention here that except for a few negligible arguments and skirmishes between the protesters and members of the Army, NO major incidents of violence of considerable nature occurred due to enforcement of law and order or breach of it during those mass protests, including the one on 9 July in Colombo, Fort,” the statement read. It then detailed how protesters used “heavy machinery” and “clubs, iron rods, stones, helmets, etc” to attack soldiers on Wednesday.

“In view of escalation of violent acts, those protesters, intent on harming the Armed Forces or the public property are therefore earnestly urged to desist from all forms of violence immediately or be prepared to face consequences,” the statement concluded, “as members of the Armed Forces are legitimately empowered to exercise their force, if the situation deems necessary as security to the public property, key installations, vulnerable points and human lives, does fall within the purview of their responsibility.”

The Daily Mirror reported that Colombo National Hospital had taken in 84 patients in relation to the violence on Wednesday, but cited these as injured during clashes near Parliament and the Prime Minister’s office. 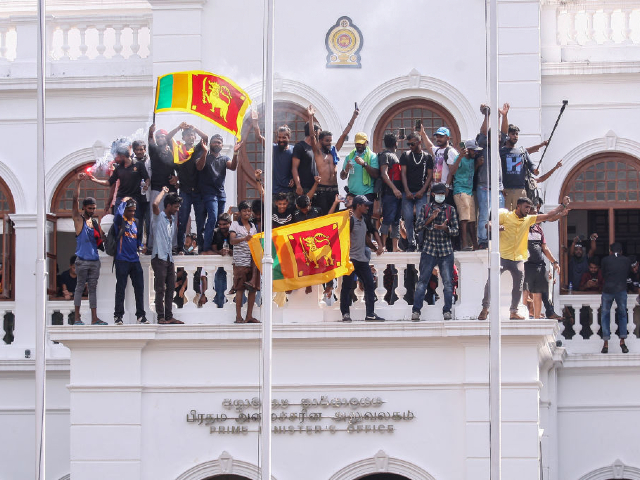 In marked contrast to the violence on Wednesday night, the protesters occupying the presidential palace – taken over for a days-long house party on Saturday – chose to vacate the premises peacefully on Thursday. Dramatic images show seemingly hundreds of people storming the palace and then using the facilities to shower, cook the gourmet food available to the president, and drink his expensive liquor.

Breaking News: Galle Face protesters have decided to hand over all Government buildings, including the President's House, President's Office, and Prime Minister's Office back to the authorities. #DailyMirror #SriLanka #SLnews pic.twitter.com/Q7AK2UXEV8

The Sri Lankan armed forces, in its statement on the protests Wednesday, asserted that its leadership is actively pressuring what remains of the government to resolve the replacement of Gotabaya Rajapaksa and installation of a new government as soon as possible to bring about an end to the protests and instability. A significant hurdle to resolution is that Rajapaksa has not formally resigned, though he did flee the country.

Parliament Speaker Mahinda Yapa Abeywardena told Sri Lanka’s News First that Rajapaksa had vowed to send in a resignation late before midnight on Wednesday, but that he had yet to receive one as of Thursday. Parliament canceled a scheduled meeting on Friday to discuss presidential candidates in light of the fact that it remains unclear who was the true president – Rajapaksa or Wickremesinghe, who the parliament speaker had appointed as “acting” president on Wednesday.