It’s great to be a prisoner in Obama’s America: you get stimulus dollars, preferential job placement, and a place in AmeriCorps. But if you’re a child in public school, watch out. 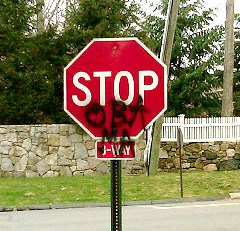 Obama said he was going to build a civilian army — and he is using our children. He is recruiting in public school classrooms: I exclusively broke the story about how his group Organizing for America is recruiting in the classroom. But AmeriCorps (can Obama pronounce the second syllable?) is the primary machinery for his youth army. And there is huge dough behind it — yours and mine. And that money is now being used to mandate service programs that indoctrinate our children to work for “the common good.”

America is the most beneficent nation in the world. We give the most to charity (though Republicans far out-give Democrats), and whenever there is a disaster in the world, we are there. On a local level, we donate a ton of money to community programs.

So why is service being mandated? Mandated service is slavery. Voluntary service is empathy. Empathy is the positive result of a moral value system, as taught in a proper educational curriculum.

We give to our community because we want to (not because we have to) — but this new AmeriCorps program appears to be mandatory. What ever happened to parents teaching their children to help out in the local community? Why is community service being defined, controlled, and essentially even regulated and dictated by the Federal Government? What ever happened to people buying groceries and dropping them off at St. Vincent’s Kitchen — or privately sponsoring a homeless family for Christmas at the local shelter, or helping a neighbor who is out of work and needs food? Or working in the food bank at the local church or synagogue?

Is it truly community service of the heart if it is passed off for a mandatory grade at a public school?

Youth Service America (YSA) is starting the indoctrination early, offering a “webinar” entitled “Engaging Elementary Age Children as Service Leaders.” It speaks of “eight year olds and elementary school-age children in general” as “our invisible partners in improving communities,” and laments that “too many educators do not consider children ready to participate in service-learning.” It makes an outlandish claim: “There are numerous examples over the centuries of children leading social change, but they don’t make it into the history books nor do we seek to learn from them.” Then follows a promise: “Through specific and little known examples and resources, this webinar will help you discover new ways of thinking about and working with children as equal partners in service.” 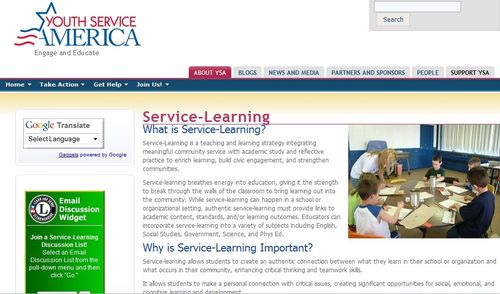 If the prospect of this socialist indoctrination doesn’t scare you in itself, the huge amounts of stimulus money going to this also ought to. This money is going to a scandal-ridden organization. Last June, AmeriCorps was hit with another scandal, when the AmeriCorps Inspector General (IG) accused a prominent Obama supporter of misusing AmeriCorps grant money. This prominent Obama supporter has to pay back more than $400,000 of that grant money.

In response, Obama abruptly fired the AmeriCorps IG, Gerald Walpin. Obama sent letters to House and Senate leaders informing them that he was firing Walpin, effective 30 days from the date of the letters.

Meanwhile, a great deal of stimulus dollars and AmeriCorps resources are going into prisoner re-entry. AmeriCorps’ VISTA program handles re-entry of convicts into society. “Faith based” groups and other “stakeholders” often work in partnership with AmeriCorps in VISTA re-entry programs.

Many of the ex-cons are being recruited for AmeriCorps — ex-offenders are NOT prohibited from serving in AmeriCorps.

A Labor Department document spells it out. The Department offers a course called “AmeriCorps*VISTA and Prisoner Reentry.” This course, it says, “is designed to assist private, nonprofit, and faith-based organizations as well as federal, state, and local agencies in applying to sponsor AmeriCorps*VISTA members.” The focus of this sponsorship is particularly upon ex-cons: “Members will serve in community projects focused on prisoner reentry: the process of transitioning from prison back into the community.”

What could go wrong? The Department implies what could go wrong in trying to explain the need for the program: “It has been estimated that approximately 1,600 individuals are released from prisons daily, and nearly two-thirds of all released prisoners will be re-arrested within three years. Fostering an individual’s transition from prison life to mainstream society can be challenging, especially when working with young offenders. However, recent study has shown that intervention that is supported through post-release supervision is most effective at reducing recidivism…. Many ex-offenders leave prison with no job prospects and no money, support system, or adequate housing. Consequently, they are at risk of reoffending when they return to their neighborhoods.”

What this amounts to is another robbery of the taxpayer: now we have to pay these ex-cons not to commit new crimes.

That is not Obama’s only plan for ex-cons. Senator Russell Feingold (D-WI) and Representative John Conyers (D-MI) are pushing the Democracy Restoration Act, which will restore voting rights to nearly four million ex-prisoners.

The flow of stimulus money to AmeriCorps for prisoner reentry and the indoctrination of children must be stopped. It’s partisan, it’s irresponsible, and its implications are ominous. It needs to be said: Obama, get your hands off our kids. Seriously. Stop the socialist/internationalist recruitment now.