As the Occupy manifestation of the “Global Peace and Justice Movement” begins to decay and break down into the predictable anarchy, violence and arrests, it is becoming clear that the protests pose special dangers for women. 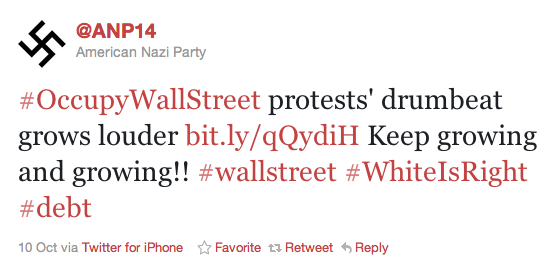 Even the left has begun to admit it. The Nation tries to laud the role of women in Occupy Wall Street but can’t avoid the truth:

The dozen women I spoke to for this story–most of them queer-identified and/or women of color–have witnessed varying amounts of offensive behavior, such as unwanted touching or use of casually misogynist language, within the movement…

Ashwini Hardikar, one protest participant, recently wrote a powerful blog post about two such experiences that occurred within an hour: a male protester giving her an unwanted hug, who then expressed shock when she responded (loudly) that she found his hug unwelcome and intrusive, and a young man chanting “Lady Liberty is a whore” and defending himself when she questioned his language. This kind of explaining and educating can be exhausting for women.

Here are a just a few recent incidents:

And even more attacks are listed in John Nolte’s “rap sheet” on the Occupy protests. The threats to women are not confined to the periphery of the Occupy movement but exist at the heart of the main Occupy Wall Street protest in New York.

As the Washington Times noted this morning:

Crime in Occupy Wall Street’s encampment Zucotti Park might be worse than the public realizes. According to The New York Post, crime at the park, which included a homeless man allegedly pulling a knife during an argument as well as claims of sexual assaults, is so out of control many protesters have resorted to a “stop snitching” rule. In fact, reports The Post, one NYPD officer said, that much of the crime goes unreported as a result. “What’s happening in there is staying in there,” said the New York City cop.

Despite these concerns, Occupy has been discouraging victims of sexual assaults from consulting police. In New York, organizers have created a group called “Safer Spaces OWS” that attempts to deal with threats to women “without involving the police or the court system unless the person wants that.” At the same time, the Occupy movement has used idealized images of women to promote itself and attract new recruits. The contradiction is striking.

Some on the left are beginning to criticize attempts by some Occupy organizers to blame the victims for speaking out–such as Jezebel:

It’s also true that people who aren’t in charge can be asked to subsume their interests to those of the group as a whole — or even demonized if they speak up in ways perceived to discredit the group. That happened to the Cleveland victim when one protester (prominently featured on the local news) accused her of being a plant.

There have been a few improvements at some Occupy protests, partly in response to increased media attention to sexual crimes. For example, after news emerged that Occupy Baltimore had been discouraging women from approaching police with complaints of assault, the organizers changed their policy, according to the Baltimore Sun:

Gone is controversial language that said the protesters would rather handle complaints amongst themselves, and that while they wouldn’t prevent someone from going to police, they would prefer not to involve law enforcement.

The memo now reads, in part:

“Instances of sexual abuse and assault will be handled according to the expressed desires of the victim. The Security and Medical teams are equipped with a list of resources, including contact information for the police, hospitals, sexual assault hotlines, and women’s shelters. In these instances, #Occupy Baltimore welcomes the involvement of the Baltimore City Police and encourages victims to report crimes.”

The media has tended to treat incidents of sexual assault at Occupy protests as isolated cases, because few journalists want to acknowledge the radical heart of the movement. It should be no surprise that an event thrown by anarchists has turned into anarchy. Those on the left who have acknowledged the problem have made a small step in the right direction, but they continue to miss the obvious solutions, because they would prefer to blame social conditions like patriarchy and racism for women’s vulnerability at Occupy.

The reality is that ideological underpinnings of the Occupy movement–such as collectivism, “consensus” decision making, and antipathy towards law enforcement–often lend themselves to the disorder that predators see as opportunity. Far from “empowering” women, the Occupy movement’s anarchist and socialist principles and policies are exposing female activists to greater danger. They cannot maintain order because they are in the midst of rebelling against it.

There can be no more excuses. It’s time for common sense to trump ideology. If the organizers of Occupy are incapable of preserving law and order among the participants, the public authorities must assert themselves. One victim more is one too many.