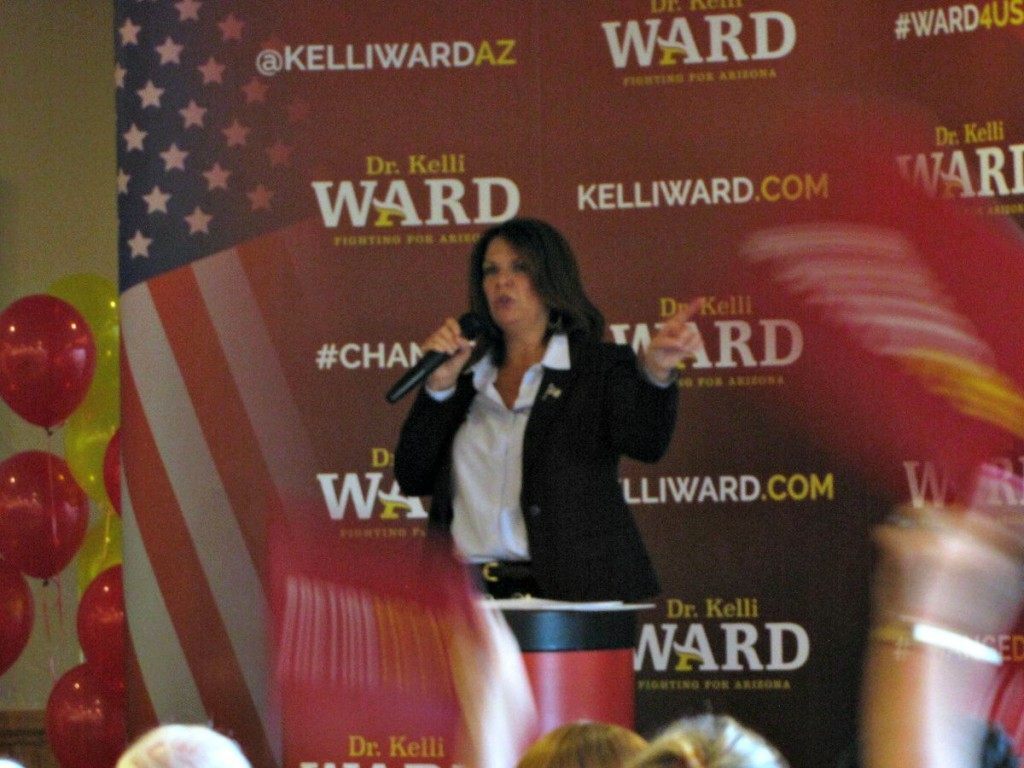 The announcement has been much anticipated after earlier this year she launched an exploratory committee to consider a primary challenge against Sen. John McCain (R-AZ), who’s been entrenched in Washington since 1983, in 2016.

“So much of Washington is broken, it is not working and we all know that. It cannot innovate, it can’t get out of it’s own way,” Ward said. “I’m running to change Washington’s way, but we can’t do that without changing the people that we send there.”

She expressed she is “well aware” of the task before her, but that she is ready for the challenge.

Expressing great appreciation for McCain’s military service to the country and for some of his service in the Senate, Ward said, “but, like many career politicians, John McCain has dug in, he’s entrenched himself in the beltway.”

Ward touched on illegal immigration and the inhibiting forces of federal regulations.

“I believe we have to secure our borders now,” she said.

“Respectfully, it’s time for a change. It’s time to retire McCain,” she added to raucous cheering.

“In just the last few years Senator McCain has voted for tax hikes, for bailouts, for amnesty, for massive spending and for liberal judges,” Ward said. “He’s mocked conservatives for trying to stop Obamacare. He’s voted 14 times to raise the debt ceiling. He’s opposed efforts to stop warrantless wiretapping and spying and the list just goes on and on and on.”

“What’s most telling is this, Senator McCain was recently singled out by Hillary Clinton as her favorite Republican,” she continued, before promising: “Send me to the U.S. Senate and Hillary Clinton will never say that of me.”

“I am jumping into this knowing full well that this is a David and Goliath battle, but remember, David won that one,” Ward said.

Ward, who’s a family practice physician, shared some of her experience as a doctor.

“As a physician I’ve seen first hand what Obamacare has done to ravage our healthcare system. Premiums and deductibles are up and the emergency departments where I work are overwhelmed,” Ward said, before shifting to her record in the Arizona State Senate as a conservative.

“As a state Senator, I fought endless spending, I’ve worked to reform welfare and I said no, no to higher taxes and bloated budgets even when it wasn’t popular,” she said.

She also focused on the importance of securing the border, taking care of military veterans and securing liberty and freedom for the children of America.

She took it to John McCain on the difference between words and actions saying: “He always manages to be a part of the problem by keeping business as usual in the beltway. And definitely one thing he does not want to see change, leaving the Senate.”

“We need someone new. We need a strong conservative voice. We need somebody who’s energetic and fully charged and ready to go,” Ward said, adding: “You deserve more than broken promises and Washington speak. Together we can remake Washington into something that’s working for you. Something that stays out of your way. Something that you don’t have to fight against every single day.”

“Changing Washington starts with you. It starts with you. Join me and thousands of your fellow Arizonans to send a fresh new voice to the U.S. Senate. I am Kelli Ward and I am running for the United States Senate. Join me!”

Various attendees of Ward’s announcement event repeatedly said things like they respect what McCain has done for the country, but he’s been in Washington too longand it’s time for him to go. Over and over those who came answered the same when asked. Still some elaborated further.

“You need people in government that are in touch with today’s problems and I just don’t think McCain is in touch with today’s problems,” said local business owner Jerad Pennington, Pennington’s Pub. “Kelli just raised kids, if anyone’s going to understand the needs of kids in school it’s Kelli. My nieces are a product of the public school and the average parent is concerned about the state of the schools, it makes people want to leave Arizona. I choose Kelli.”

Breitbart News sat down with State Senator Kelli Ward prior to her announcement. She shared her thoughts on the campaign and vision forward to be a voice for and continue to build relationships with the people of the great state of Arizona. Watch Breitbart.com for additional coverage of that exclusive interview.