As President Obama arrived at his Oklahoma City hotel last night, he was met by a group of several dozen people defiantly waving Confederate flags. 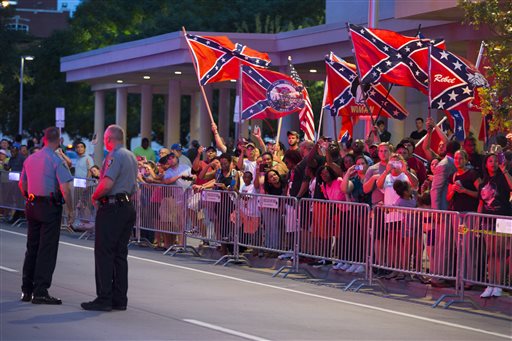 (photo via the Associated Press)

According to reports, the group was organized by Andrew Duncomb, an African-American supporter of the Confederate flag.

The group also gathered outside Durant High School in Duran, Oklahoma where Obama was speaking about expanding broadband internet to low-income communities.

“[L]ook at these people, they all followed the black guy out here. Do you think that any of them are racists?” Duncomb asked in an interview with local media channel KFOR.

Some of the protesters explained to local media that they were there to demonstrate the true nature of the flag as a symbol of Southern heritage.

“We’re not gonna stand down from our heritage. You know, this flag’s not racist. And I know a lot of people think it is, but it’s really not,” said a man who told local media he drove three hours from Texas to join the protest. “It’s just a southern thing, that’s it.”

The White House has not responded to the protesters.

President Obama is expected to visit a federal prison in El Reno, Oklahoma later this afternoon.