UPDATES BELOW – NEWEST AT THE TOP:

In the manifest linked below, Flanagan says he was a gay man and appears to claim he was a victim of homophobia from his co-workers, including “black men and white females.”

ABC News reports that Flanagan left a suicide note indicating he was motivated by a “Race War.”

“As for Dylann Roof? You (deleted)! You want a race war (deleted)? BRING IT THEN YOU WHITE …(deleted)!!!” He said Jehovah spoke to him, telling him to act.”

Later in the manifesto, the writer quotes the Virginia Tech mass killer, Seung Hui Cho, and calls him “his boy,” and expresses admiration for the Columbine High School killers. “Also, I was influenced by Seung–Hui Cho. That’s my boy right there. He got NEARLY double the amount that Eric Harris and Dylann Klebold got…just sayin’.

In an often rambling letter to the authorities, and family and friends, he writes of a long list of grievances. In one part of the document, Williams calls it a “Suicide Note for Friends and Family”.

–He says has suffered racial discrimination, sexual harassment and bullying at work.

–He says he has been attacked by black men and white females.

–He talks about how he was attacked for being a gay, black man

The Associated Press is reporting that Vester Flanagan died of a self-inflicted gun shot wound.

CNN is reporting that when the television station fired the suspect, they were so worried about his behavior, they had everyone clear the room as the suspect cleaned out his desk. This was two years ago. —

In the Twitter account (see screen shot below) identified as the suspect’s, he allegedly wrote after committing the murder, “Alison made racist comments,” referring to one of the murder victims.

WDBJ reports that the suspect was a disgruntled employee. When let go, he was escorted out of the building by police. While an employee, he committed a number of outbursts and filed the EEOC complaint.

The woman being interviewed by Alison Parker at the time of the murder was shot and is now in stable condition.

WDBJ is now reporting that the suspect is NOT dead. He is in critical condition.

WDBJ reports that the suspect is dead.

#BREAKING: Man suspected of killing two WDBJ7 employees kills himself on I-66 in Fauquier Co. http://t.co/XLx3pS2I5X

According to CNN: “Law enforcement confronted Vester Flanagan on Interstate 66 and Flanagan shot himself, officials tell CNN. It is not clear whether he was killed or injured.” —

.@ABC News received a 23-page fax from someone who says he is Bryce Williams. We have turned it over to authorities. http://t.co/rE7t0hCzj9

Numerous sources report that Vester L. Flanagan has been identified by Virginia police as a person of interest in the double murder of WDBJ reporter Alison Parker and cameraman Adam Ward. Social media accounts identified by numerous news outlets as belonging to the suspect point to a possible racial motive. Flanagan is black. Parker and Ward were both white.

Apparently Flanagan is a former reporter of WDBJ who used the on-air name Bryce Williams. CNN’s Drew Griffin reported that Flanagan “has a history as a disgruntled employee.” Griffin said that Flanagan sued a former employee for racial discrimination.

Police are looking for the 41  year-old Flanagan who drives  a 2009 gray Mustang. 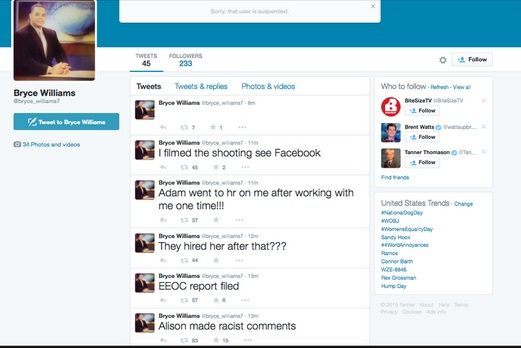 The screen grab below is reportedly from the video Williams/Flanagan took of the murder: 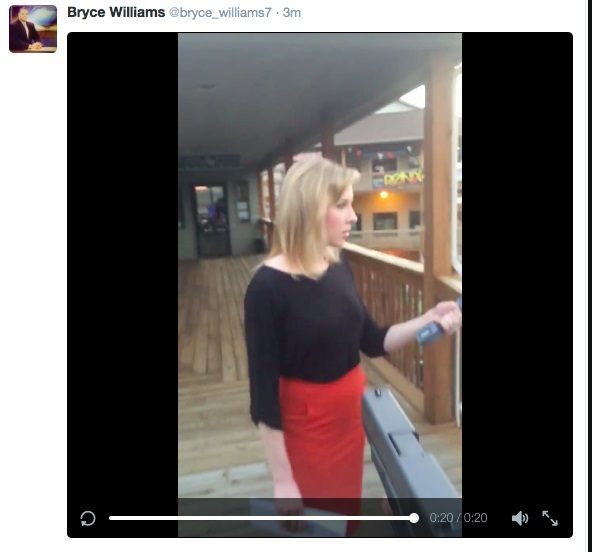