President Obama recently visited Alaska in search of the mythical beast they call ManBearPig – as part of his ongoing mission to persuade an increasingly skeptical world that climate change represents the greatest threat of our age. Not even a string of plausible lies could save his mission from failure.

In a speech to international delegates at the GLACIER conference, he said:

Our understanding of climate change advances each day.  Human activity is disrupting the climate, in many ways faster than we previously thought.  The science is stark.  It is sharpening.  It proves that this once-distant threat is now very much in the present.

In fact, the Arctic is the leading edge of climate change — our leading indicator of what the entire planet faces.  Arctic temperatures are rising about twice as fast as the global average.  Over the past 60 years, Alaska has warmed about twice as fast as the rest of the United States.  Last year was Alaska’s warmest year on record — just as it was for the rest of the world.  And the impacts here are very real.

But only the first of those sentences is true. All the others – as researcher Paul Homewood notes – are demonstrably false.

Yes, Alaska does look as it if has been warming slightly, if you look at the data from the National Oceanic and Atmospheric Administration (NOAA). 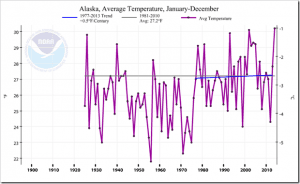 However, NOAA is notorious for adjusting raw data for political purposes – in order to exaggerate “global warming”. And so it would appear to be the case with Alaska.

As Homewood shows, if you look at the data from the Alaska Climate Research Center, most sites in Alaska have been cooling not warming. 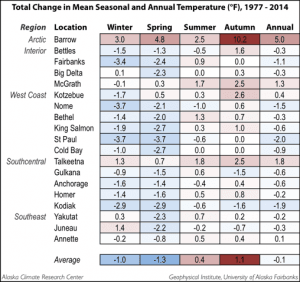 The big exception is Barrow, whose 5 degrees F warming has completely skewed the average. But Barrow – whose population grew from 300 in 1900 to 4600 in 2000 – is vulnerable to the Urban Heat Island effect. That is, its recent weather station readings have been artificially warmed by the heat from the town. And instead of adjusting for this, NOAA was caught out – again by Paul Homewood – doing the exact opposite: fiddling the data in order to exaggerate the supposed global warming in the area.

Remove the distorted and unreliable Barrow figures from the data and the average cooling since 1977 would be considerably greater than that paltry -0.1 degrees F.

As for that phrase of the President’s about “the impacts here are very real”: presumably, he meant those tragically melting glaciers, like the Exit Glacier he visited in a publicity stunt with Bear Grylls.

Yes, the glaciers of Alaska may be retreating. But this has nothing whatsoever due to man-made global warming. We know this because they began their retreat in about 1770 AD long before anthropogenic carbon-dioxide emissions could have made any plausible difference to climate. See figure below:

Oh, one final thing. Guess when the official highest temperature record for Alaska was set.

Yup. 100 degrees F one June in Fort Yukon, back in 1915 in the days long before Al Gore was even an evil glint in his father’s eye…