Los Angeles mayor Eric Garcetti was forced to cut short a town hall meeting with the black community on Monday evening after it was disrupted by Black Lives Matter protestors.

The meeting, at the Holman United Methodist Church, was attended by several hundred people, but several dozen activists interrupted repeatedly and forced Garcetti to flee. The LAPD had to disperse the crowd before he could depart, the Los Angeles Times reports.

#BackDoorLAMayor has turned his back on Black folks. Not our town hall! #BlackLivesMatter @BLMLA @ericgarcetti pic.twitter.com/1EfNsX9AWw

The organizers of the forum urged the protestors to have a “civil conversation.” Instead, they chanted “”Black lives, they matter here!” and forced Garcetti to leave under police guard. NBC Los Angeles recounted: “Garcetti initially came to answer questions from citizens regarding economic opportunity and community safety before protestors began chanting. But the event quickly turned to chaos as Black Lives Matter protesters rushed the podium.”

Black Lives Matter organizer Dr. Melina Abdullah, a professor of Pan African Studies at Cal State L.A., posted a list of the protestors’ demands to Facebook, which includes a demand for the resignation of Los Angeles Police Department Chief Charlie Beck, as well as the payment of “reparations” to the community for police violence. 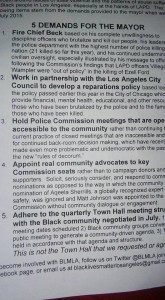 Black Lives Matter protests have been staged sporadically throughout Los Angeles over the past year, in response to the death of Michael Brown in Ferguson, Missouri as well as police shootings closer to home, such as the Ezell Ford shooting. Garcetti was criticized when he skipped the inquiry into Ford’s death for a fundraiser in Washington.

Since then, Garcetti has been doing damage control. On Monday, he attempted to show solidarity with the Black Lives Movement by explaining, as other Democrats have been forced to do, why it was wrong to say “all lives matter.” The Times quoted Garcetti:

“Let me say, you’re right, your analysis,” Garcetti said. “I hate this back-and-forth we hear nationally, where people say black lives matter and politicians say all lives matter. Black lives matter in a unique way, and you and I see eye to eye on this.”

That was not enough for the protestors, however, who turned their backs to the stage and booed repeatedly. Their goal was to stop Garcetti from speaking, not to listen to his explanations.

Tonight, we had hundreds of South LA residents attend a community meeting – leaders, business owners, mothers and children, who took time out of their evening to discuss the critical issues that matter most to all of us. I am disappointed that our conversation was cut short when there is so much work for us to do together to make our neighborhoods stronger and safer. I believe in our City and my commitment to our shared concerns continues, stronger than ever.