For years, water, or, more accurately, its scarcity, has been predicted to be the next doomsday scenario.

In 1994, the American Philosophical Society published a book bearing the title: Is Water Our Next Crisis? In 2007, NBC featured: “Crisis feared as U.S. water supplies dry up.” More recently, in 2011, NPR did a story on Water: The Epic Struggle for Wealth, Power and Civilization—a new book in which the author posits that “water is surpassing oil as the world’s scarcest critical resource.” This year, a Business Insider (BI) report called “water scarcity problems” a “looming national issue.”

Hydraulic fracturing is often blamed for exacerbating water concerns. BI states: “In Colorado … they’re keeping an eye on the effects of fracking on the state’s water supply. Using water for fracking could contribute to local shortages in the drought-prone state.”

Addressing the water problem, NBC offers hope: “Technology holds promise.” While not specifically referencing fracking, the 2007 feature couldn’t have predicted how integrally linked ever-improving fracking technologies and hope for our water woes could be.

Instead of the problem, the oil-and-gas industry could just be the solution.

Water is important to the hydraulic fracturing process. Fresh water is used to help transport the tiny grains of sand deep underground where they are used to hold open the fissures in the fracked rock—allowing the oil or natural gas to flow at economic rates. When the resource is extracted, it comes out of the ground with not only the water that was pumped in, but also with “produced water” from deep in the earth. This water mixture—that contains both the chemicals used to reduce friction in the frack job, and very high concentrations of salt, other minerals, and metals—needs to be disposed of.

Historically, the wastewater—which can have as high a ratio as 10 barrels of water for every barrel of oil—has been trucked off-site and then injected thousands of feet underground into “disposal wells.” The disposal process is expensive and could potentially be the source of the spate of small earthquakes being experienced in Oklahoma.

The industry has been in search of a solution that would improve both safety and the bottom line.

Two years ago, I wrote about water reprocessing technologies that were able to clean the water at the well site so that it could be used again, and again, for hydraulic fracturing—virtually eliminating wastewater for many scenarios.

As technology does, it is continuing to improve.

What was “wastewater,” can now have new life irrigating crops in the arid southwest—or, at least, that is the apparent result of a research project conducted by the Texas A&M AgriLife Research team, the Texas Railroad Commission (RRC), and a coalition of oil-and-gas companies. The initial results look very promising.

Bill Weathersby, Chairman and CEO at Energy Water Solutions—a company that uses a patented technology to successfully recycle more than eight million barrels, so far, of wastewater—spearheaded the effort. Katie Lewis, PhD, designed the experiment at the AgriLife Experimentation Station near Pecos, Texas. Anadarko Petroleum brought the wastewater from a nearby well and Gibsons provided the tanks to store the water on site. The RRC permitted the use of the recycled water for the noncommercial cotton crop, which was planted on June 2, 2015. The size of the project was designed around the amount of water permitted.

Portions of the controlled field were watered with well water, while others received a blend of one part recycled water and four parts well water. About 30,000 barrels of recycled water were used for the project

I had the opportunity to see the field, feel the cotton, and talk with Lewis—who told me the cotton grown with the blended water is doing as well as the cotton irrigated with well water. Soil analyses have demonstrated that there should not be adverse effects when irrigating with the blended water. The cotton will be tested for quality and strength. The soil will be sampled to be sure there is no contamination. Full reports on the economic and agricultural aspects will be produced.

Commissioner David Porter, RRC Chairman, describes the project as: “An important first step,” and said it was “a perfect example of the collaboration we need” and “evidence that free markets do work.” 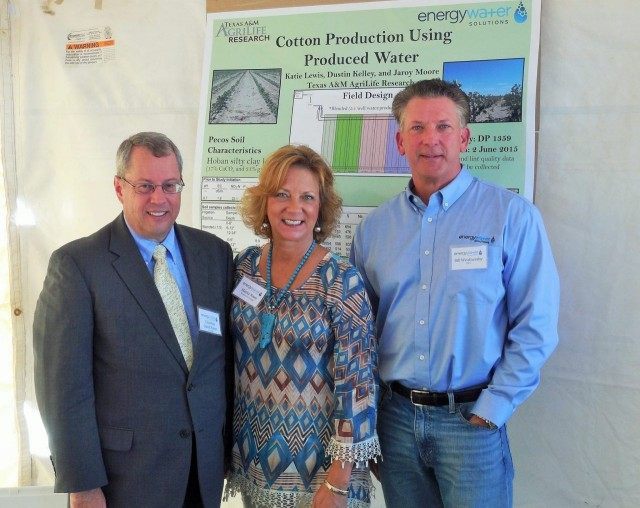 Assuming the test results are as expected and the project expands next year, Porter told me the RRC will likely permit more recycled water. Weathersby hopes more companies will participate in additional testing to expand the project. Lewis would like to have a test field with differing ratios of recycled and well water: 4:1, 3:1, 2:1 and 1:1. Ultimately, participants hope the Texas legislature will use the results to change the law to allow the use of recycled water for agriculture.

While this project and collaboration are unique, there are many other companies with water recycling technologies and numerous other tests being conducted.

One of the new technologies being tested is developed by Kaizen Fluid Systems and uses an electromechanical process that can break down the molecular bonding agents to produce clean water with commercially viable by-products and no toxic waste stream. Kaizen’s system, which is scalable to meet the client’s needs or volume requirements, is especially effective in North Dakota’s Bakken Field where the wastewater disposal costs are very high and produced water is too salty to be recycled cost effectively by evaporation or reverse osmosis systems.

The type of hydraulic fracturing frequently used in the Bakken, cross link gel, requires exceptionally clean water with no salt or metals, and tests found that the Kaizen technology was able to deliver. The model is currently being scaled up and soon will be available for wide-scale wellsite use—with the mobile system processing 50 gallons a minute and the fixed base: 300 gallons per minute or 10,000 barrels (420,000 gallons) per day. Additionally, Sandy McDonald, Kaizen’s CEO, told me their system removes present and future environmental liabilities for the producers.

Recycling produced water and reusing it for hydraulic fracturing and/or agricultural use provides more water for everyone’s use, while eliminating the need for disposal wells.

The oil-and-gas industry’s search to do things better and more cost effectively, could provide the answer to America’s water woes.

The author of Energy Freedom, Marita Noon serves as the executive director for Energy Makes America Great Inc. and the companion educational organization, the Citizens’ Alliance for Responsible Energy (CARE). She hosts a weekly radio program: America’s Voice for Energy—which expands on the content of her weekly column. Follow her @EnergyRabbit.