Over the past few years BuzzFeed Politics has lost much of its political influence. A series of cheap, partisan, and outright sleazy scandals coupled with an overall exhaustion with the shallow gotchas that have been the left-wing site’s currency since its inception, have taken a toll. In a desperate bid to be seen again as relevant, BuzzFeed attempted to fabricate a story about militiaman Cliven Bundy and tie it around Donald Trump’s neck. The result was yet another massive blow to editor-in-chief Ben Smith’s almost non-existent credibility.

A Pennsylvania prison inmate named David Rothrock, who seems to enjoy filing bizarre, handwritten lawsuits involving famous people, did so in Nevada in 2014. Although there is no proof that anyone other than Rothrock filed the lawsuit, because it suits BuzzFeed’s political agenda and names Bundy and Trump, Buzzfeed published a fraudulent story that claimed Bundy had filed the lawsuit to (among other things) protect Trump from threats made by President Obama.

Check out the original headline, sub-headline, and opening paragraph. 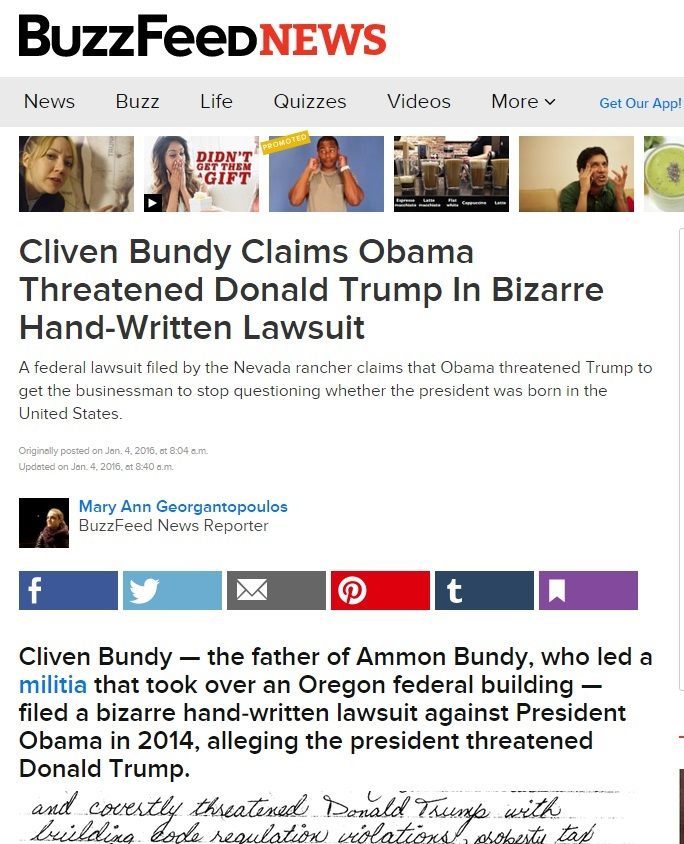 There is just one problem: none of that is even close to the truth, and it is hard to imagine Ben Smith didn’t know that. All it would take, after all, is a quick Google search to discover that Rothrock is a crackpot.

The fact that the lawsuit also claims that the Benghazi attack was “implemented so George Bush could somehow feel vindicated for 9/11” would have been a red flag to anyone with an instinct tuned to the search for truth.

Nonetheless, Smith not only published these lies, using his Twitter feed, he attempted to blame Donald Trump for inspiring the lawsuit. Keep in mind, Trump wasn’t even running for president when the suit was filed. 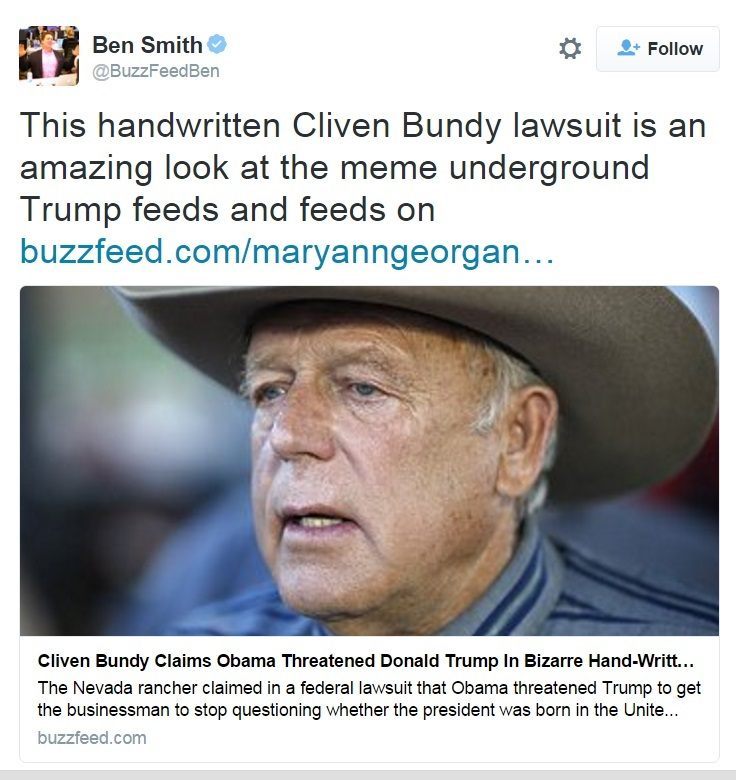 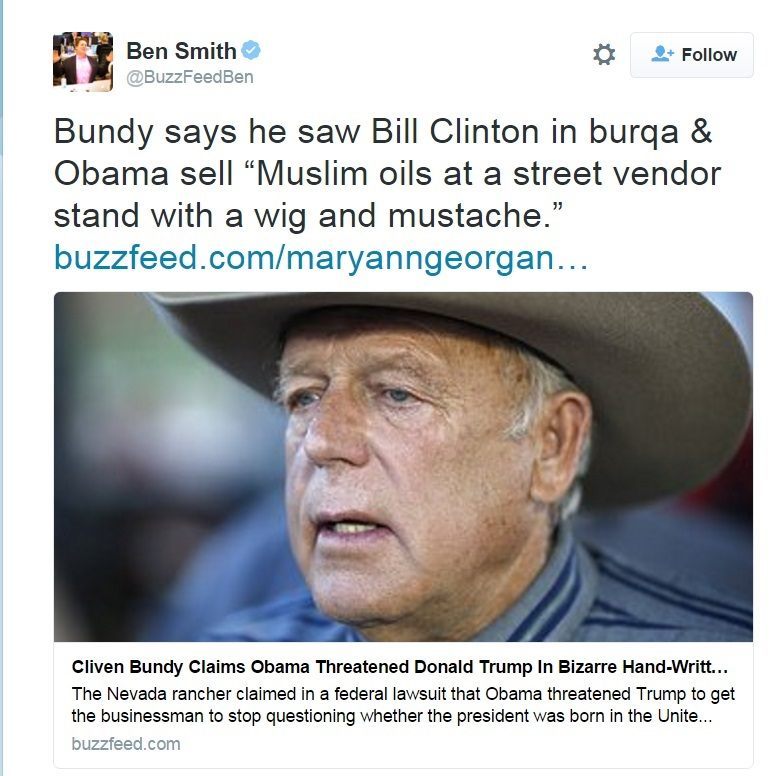 After Twitter caught on to BuzzFeed’s fraud, Smith claimed that the piece had been corrected, when it had not. Laughably, the piece now claimed that Rothrock and Bundy had jointly filed the lawsuit. 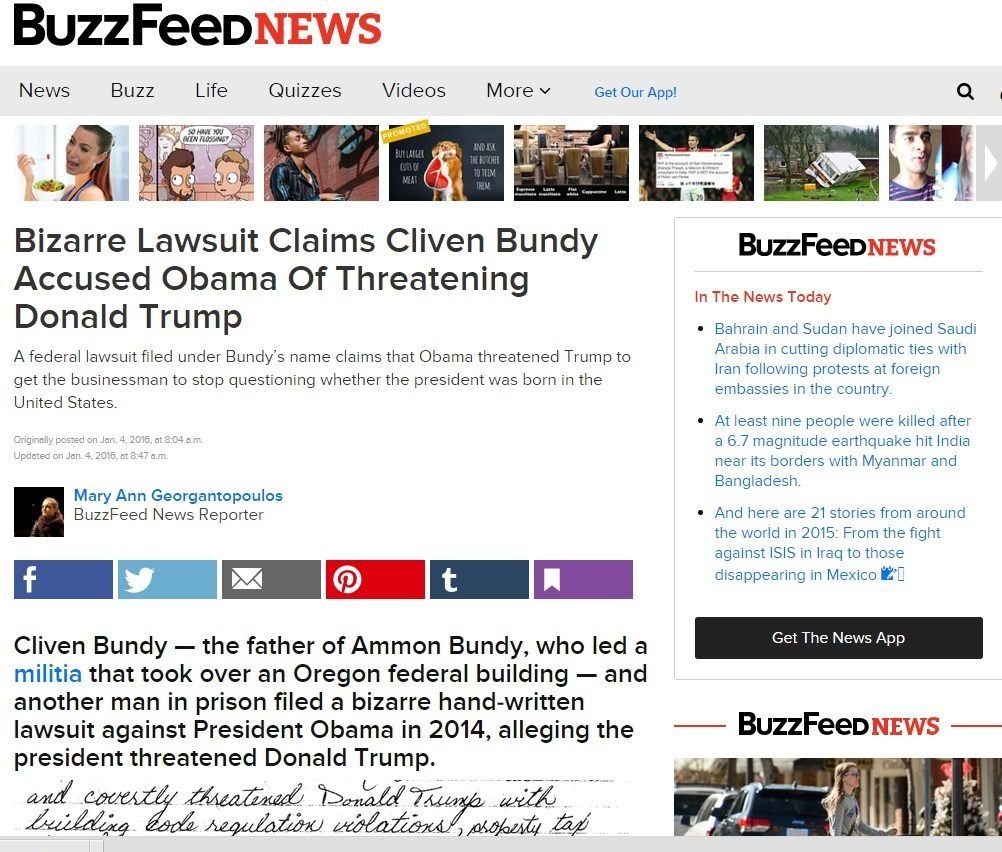 After another Twitter storm, Buzzfeed finally corrected the story accurately, which turned it into the stupid Nothingburger it always was.

Like Fareed Zakaria’s victory dance over the death of white people, the hour “Meet the Press” spent comparing Republicans to Nazis, CNN and Politico lying about Ben Carson’s biography, and The Washington Post using its fact-check column to tell serial lies. what we have here is one more example of the so-called “objective media” engaging in desperate, shrill, demagogic overreach to protect Hillary Clinton by taking down her primary threats.

We are so far beyond the usual-usual media bias.

Buzzfeed’s Ben Smith and the rest are already engaging in naked fraud to achieve their political goals.