Donald Trump, the frontrunner candidate in the Republican presidential primary, is skipping tonight’s debate hosted by Fox News and putting on a fundraiser for America’s military veterans as counter-programming. Follow Breitbart News for live updates on the event at Drake University in Des Moines, Iowa.

• “Stump for Trump” girls hit the stage twice
• Rick Santorum and Mike Huckabee take the stage with their competitor
• John Wayne Walding, a veteran who lost his leg in Afghanistan, tells the crowd that “thank you” makes all the difference
• Anti-war protesters crash the event but get shouted down by attendees
• Trump receives an “Honor Ring” to remember veterans who take their own lives
• Trump estimates approximately $6 million raised–much from businessmen he knows personally, nearly $500,000 from online donations

11:19 PM: WASHINGTON POST — “Donald Trump wasn’t at the GOP presidential debate. But he still managed to grab the most debate night chatter.”

11:09 PM: POLITICO — “There was a Donald Trump-sized void in the Republican debate lineup tonight.”

11:07 PM: REUTERS — “Trump overshadows Republican debate even as he sits it out”

An unbelievable night in Iowa with our great Veterans! We raised $6,000,000.00 while the politicians talked! #GOPDebate

Trump thanked the guy who gave a million, but having @RickSantorum and @GovMikeHuckabee at event was worth more to his campaign #GOPDebate

Winner of #GOPDebate is @realDonaldTrump by staying away. If @TedCruz had boycotted too, media cartel would have shattered. Missed a chance.

[Not really Breitbart but] Matt Drudge:

10:30 PM: Alex Swoyer, on the ground at the Trump event, has more information on the protesters:

One group of protesters was chanting, “We Want Veterans, Trump Wants War!”

The optics are quite incredible. The Trump-less Fox News debate feels like a rerun without its star. Same questions. Same answers. Zero charisma. Meanwhile, just a few blocks away, Republican frontrunner Donald Trump announced that he used his contacts to raise more than $5 million for America’s veterans, Standing by his side are Trump’s GOP  primary rivals Rick Santorum and Mike Huckabee.

Wow. @realDonaldTrump and vets working to stop suicide. I get it–candidates talking about what they'll do and Trump doing what he'll do.

Love him or hate him, the @realDonaldTrump is a master marketer. The #STUMP4TRUMPGIRLS move at #Trump4Vets event is just 👌

Trump: I Got To Know Mike Huckabee, Rick Santorum ‘On The Trail, As They Say’

Santorum took to the podium first, which was marked with a Trump campaign sign, and said even though they are competing against each other, “that doesn’t mean we can’t work together when it comes to our veterans and that’s what Mike and I are doing here tonight.”

Donald Trump: Not Going To Fox’s Debate ‘Out Of Respect For Myself,’ Raised $6 Million For Veterans

“I said, ‘Listen, I’m not going to do the debate out of respect for myself,’” Trump said, adding, “we actually raised close to six [million dollars] to be totally honest.”

Trump is a “wonderful husband” and a “wonderful father,” she said. Goertz said Trump lives a “clean” life, explaining that he “doesn’t drink alcohol” and “doesn’t smoke.”

10:15 PM: Trump wraps up and makes his way to the front row to begin shaking hands in the crowd.

10:12 PM: Trump: we were very careful in selecting who will receive tonight’s donations to keep costs down and make sure the money goes where it’s supposed to. Declares the event “a phenomenal night.”

10:10 PM: Trump says he wants generals like Patton & MacArthur in charge of the military, not “generals who talk.”

10:08 PM: Trump brings Diamond & Silk back on stage; protesters again pipe up and get a counter-chant going from the crowd. Trump says if they were alone in a room with the protesters they would probably talk through and agree on everything. 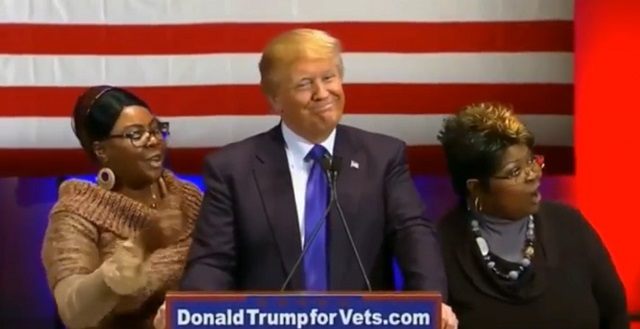 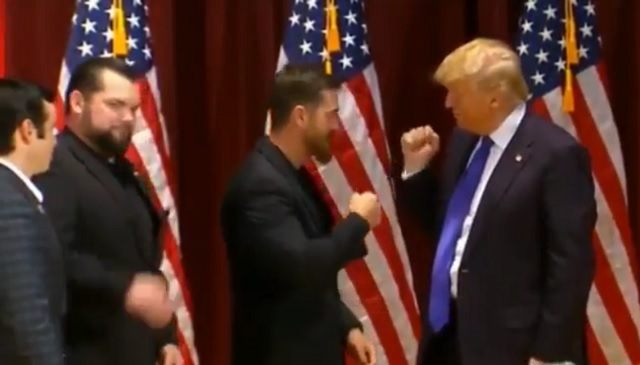 10:03 PM: Walding introduces representatives from 22kill.com, an organization that sells “honor rings” to commemorate the average 22 veterans who commit suicide each day. 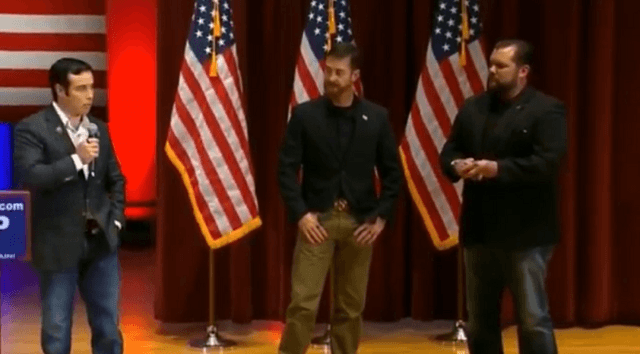 10:01 PM: Walding talks about the comrades he has lost: Your debt to the fallen is to live your life well. “That’s the best middle finger you can give to the Taliban; that’s to live great and live awesome.”

9:55 PM: Walding says the three things that carried him through losing his leg are: God, his wife, and Americans–especially those who thank veterans. “If I lost my leg and got spit on, I would be homeless, single, and have an addiction problem… It sucks being one-legged… when your kids are wanting to play soccer and you can’t do it… but it’s worth it. Why? Because ‘thank you’ [from other Americans].”

9:44 PM: Trump introduces John Wayne Walding whose story is told in the book No Way Out: A Story of Valor in the Mountains of Afghanistan. Walding, who lost his leg in the Battle of Shok Valley, shares several stories of Trump’s kindness toward himself and other veterans. 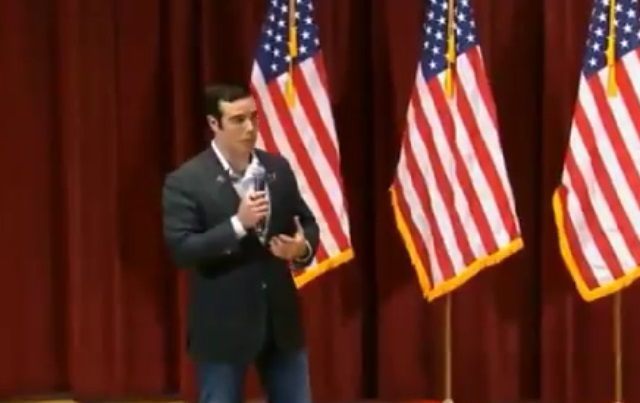 9:42 PM: From Alex Swoyer–Entrepreneurs from Detroit: ‘I Think Donald Will Win’

9:39 PM: Huckabee gets the crowd on its feet chanting “USA!” with a compliment to veterans–that they are responsible for every free breath we take–and the very existence of our government. Says Trump is not the kind of person to make the night just about him, and that’s why he invited two competitors. 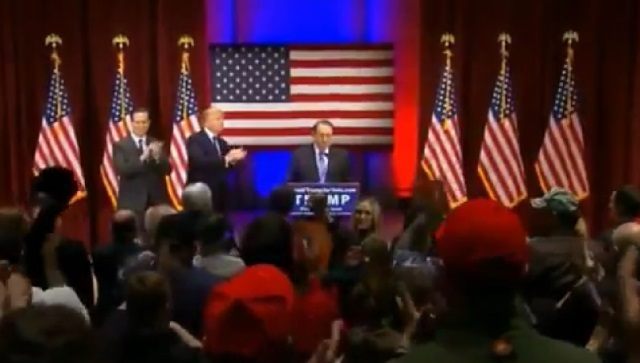 9:37 PM: Santorum jokes that he can’t be photographed next to the Trump podium sign; “I’m supporting another candidate.” Links his personal experience to tonight’s fundraiser and suggests taking all the money allotted for the VA to go directly to veteran suicide prevention and mental health. 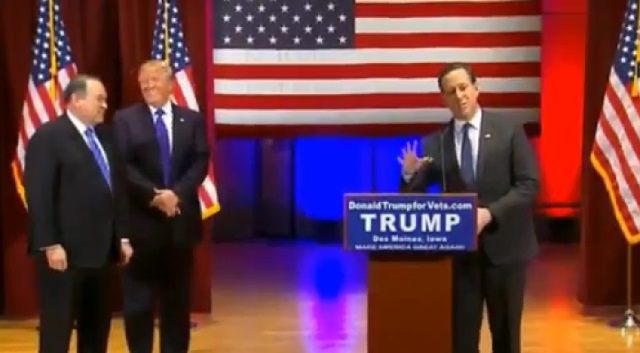 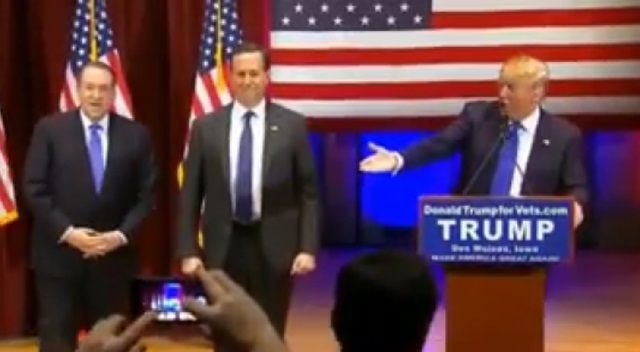 9:32 PM: Trump mentions Jeb Bush at the debate: “He’s probably looking for me!” Then mentions Jeb’s wasted $128 million in campaign funds. “7 months ago, I was on the other side [as a lobbyist]… The politicians aren’t that stupid,” he says of the U.S.A.’s bad international deals.

9:28 PM: Trump has pivoted to China–brings Phil Ruffin and his wife Oleksandra on stage to thank them for their donation of $1 million. Says Phil would be an ideal man to make trade deals with China. Ruffin says a few words about his business relationship with Trump.

9:25 PM: Trump references his Mobile, Alabama rally with Jeff Sessions. Says attendance there was 35,000, boasts that his crowds are the biggest–with Bernie in 2nd–and the networks only turns the cameras toward the crowd to capture protesters.

9:24 PM: Trump gets interrupted by protesters–sounds like an anti-war slogan. Crowd quickly drowns out.

9:19 PM: Trump says Fox called “minutes ago” asking him to attend the debate but he responded, “Hasn’t it started?” Boasts that his event has more cameras “by far.” 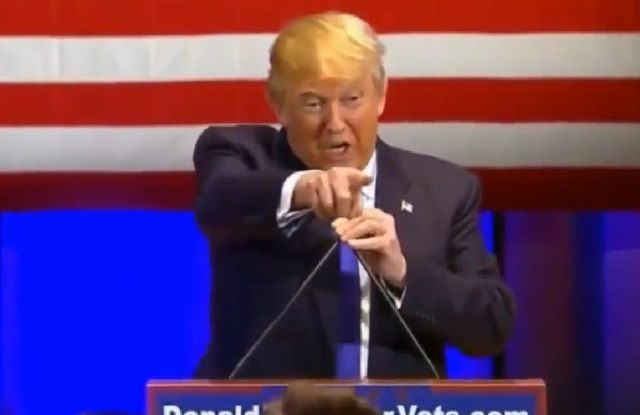 9:07 PM: The Trump family has appeared in the front row–Melania (pictured), Eric, and Donald Jr. visible on live stream. 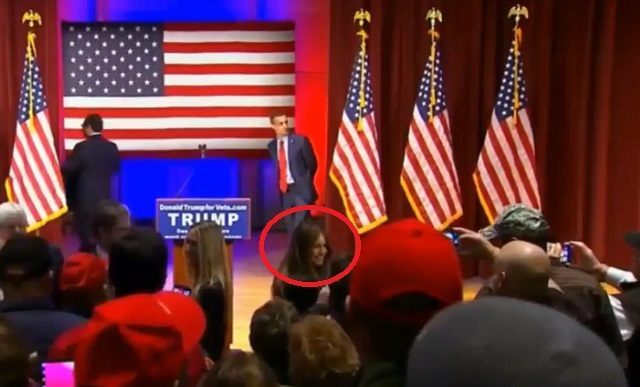 9:02 PM: Trump has not yet appeared as the Fox News main stage debate now begins.

“You got an apology?” [Brianna] Keilar asked.

“Yes, and they could not have been nicer,” Trump said, declining to say who provided the apology, though saying later that he talked to “top people.”

Asked whether he would have attended the debate had he not already scheduled his event for veterans, Trump said, “I might have.” But he hastened to add that the situation by now “had taken on a life of its own.”

“You know, we had a president that ran on hope and change, but our veterans don’t have any hope and some of our veterans don’t even have enough change to buy a loaf of bread – that’s a problem,” she added, saying that’s “why you should stump for Trump… because he has you in mind.”

8:48 PM: Waiting for Trump. The hold music on the live stream was jazz before the event began; now it’s prog rock.

8:38 PM: Crowd gets rowdy as it appears Mike Huckabee shakes hands with attendees in the front row.

8:37 PM: Stump for Trump girls in closing: “If you see a veteran or a wounded warrior, hug them. Love them. Appreciate them. Because without them, we wouldn’t have the freedoms that we have in the United States. I want to say God bless you. And God bless the United States of America. Let’s help Donald J. Trump make America great again!”

8:31 PM: “This is not about politics. This is about common sense–and we have Donald J. Trump standing up for our wounded warriors.”

8:30 PM: Diamond and Silk, the “Stump for Trump” girls, take the stage, thanking one’s father, who served in the military. 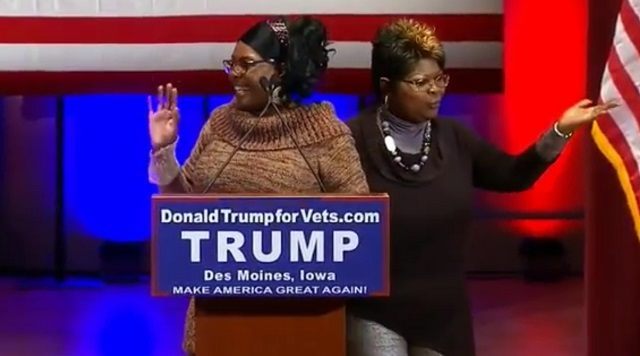 8:28 PM: Goertz returns to the podium to introduce Trump–says she has known Trump personally for 10 years. Emphasizes his love of family and “squeaky clean lifestyle,” e.g. not drinking. 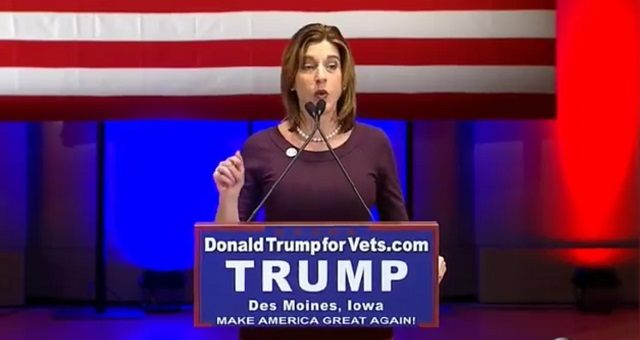 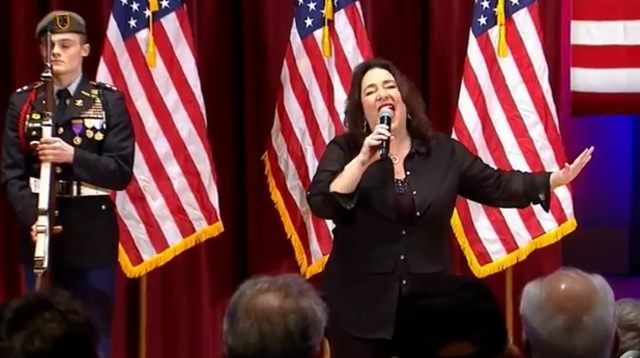 8:22 PM: The American flag is presented by a Junior Reserve Officer Training Corps (JROTC) team and the crowd delivers the Pledge of Allegiance.

8:20 PM: Trump’s Iowa co-chair and a former Apprentice contestant Tana Goertz comes to the stage to Katy Perry’s “Roar,” saying, “This is a lot more fun than what they’re doing, isn’t it?” She then introduces a pastor who gives a prayer of invocation to “Jesus Christ our Lord.”

8:10 PM: Crowd’s already hamming it up for the live feed. 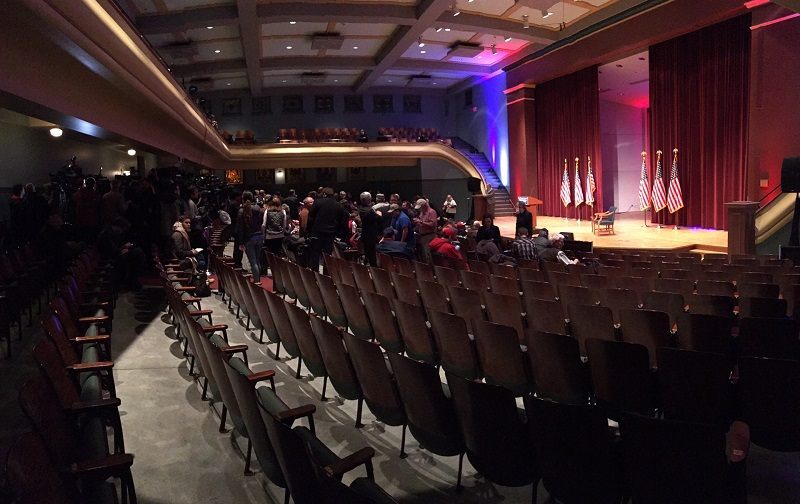 7:45 PM: Trump’s plane has landed in Iowa. As Breitbart News reported earlier, Mike Huckabee and Rick Santorum have declared their intention to attend the event once they finish at the Fox News undercard debate–currently in progress. Huckabee won the Iowa caucus in 2008 and Santorum won in 2012. 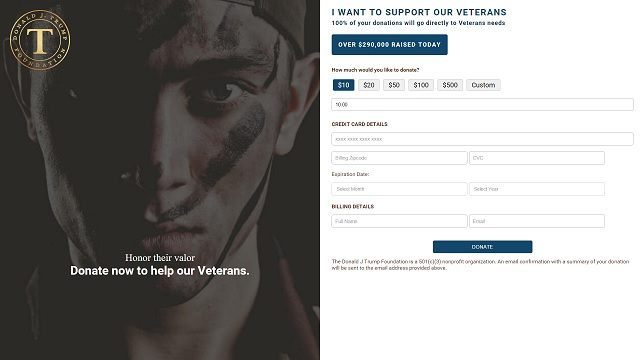