“SIEG HEIL,” the front-page headline reads in massive font. “Living Nazi Germany in Trump’s America,” it says in the headline. The actual title of the editorial is hardly less subtle: ‘Donald Trump is going to get us all killed.”

In the editorial itself, the Fresno State students accuse Trump — and his supporters — of seeking mass murder:

Trump’s America is the Fourth Reich. …

The hardcore racist and fascist people supporting Trump don’t want to kick out Muslims and undocumented Mexicans — they want to murder them.

These people that normally keep their backward racism under the rock in which they live, are voting to be openly racist. Trump gladly brings the racism and xenophobia out of people — as any good fascist would. …

If we let them elect Trump, there will be lynchings. …

Trump represents the rise of a new Hitler and is capable of the same atrocities. It’s like we’re in the 1930s on a runaway train barreling toward World War III.

The article ends by urging students: “Get off your lazy asses and do something about it, you hipsters.”

The editorial is also accompanied by a photoshopped image of Trump in a Nazi uniform, giving the Nazi salute. 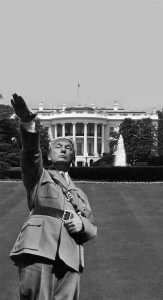 As the controversy around the article mounted — even crashing the newspaper’s website — the editors of the Collegian felt compelled to publish an explanatory note, noting that the editorial was opinion, not news, and arguing that it was necessary to run it on the front page to provoke the public into action.

“Donald Trump wouldn’t back down, and neither will we.”

Joseph I Castro, the president of the publicly-funded university, defended the Collegian‘s right to freedom of the press on Twitter, suggesting that those who objected to the article write to the newspaper to express their concerns.