Large denomination physical cash is going to be outlawed if central bankers have their way. The push toward a fully digitized monetary system─where every transaction will be recorded, scrutinized, controlled, and taxed─is being sold to the public as some miracle elixir to cure the world of criminal behavior.

It can be argued that up until a few years ago there were still ways to exist off the grid and operate outside the monetary system, but the implementation of negative interest rates has now virtually assured that cash, as we know it, is on its last leg.

You can have cash or you can have negative interest rates, but you can’t have both. If negative interest rates are further reduced, what could be described as slow motion bank runs will likely ensue. The common man, seeing his hard earned savings robbed with each declining monthly bank statement, will finally awaken from complacency and begin actively withdrawing their money in physical form, thereby endangering the very foundation of fractional reserve finance.

Banks can’t exist without deposits. Keeping money in a mattress is preferable to being financially bled to death with negative rates. Central bankers are well aware of this and are already prepositioning policies and taking steps to prevent the coming exodus. Outlawing large denominational physical cash and large cash transactions will be used to financially imprison the public while the negative interest rates simultaneously pick their pocket.

How low would negative rates have to go before you withdrew all of your money from the bank? 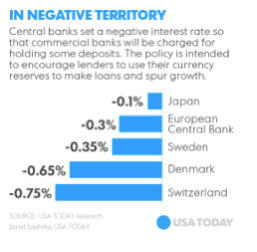 Laugh all you want. Pretend this is just another conspiracy theory run amok, but these policies are already set into motion in Europe with the U.S. trailing not very far behind. Under the guise of stopping criminal activity, ending corruption, and fighting the global war on terror, the last bastion of financial freedom is now being sacrificed to prop up a debt tsunami.

Global debt has increased by over 57 trillion dollars since 2007. At these levels, sovereign debt in particular cannot be repaid with sound currency. Rather than dealing with the debt and slowing its growth to levels below the rate inflation, the central bankers’ solution is to instead destroy physical cash and punish savers. 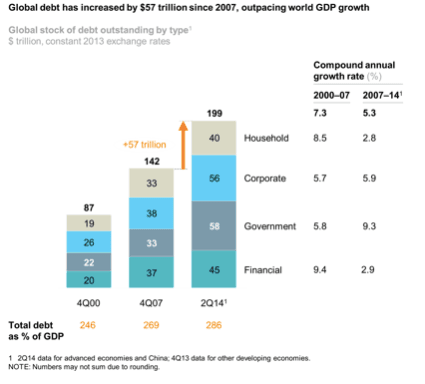 The cold reality is that just paying the annual interest cost, at historically normal interest rates of 3-4%, would be next to impossible for the majority of the world’s governments. Burdened with surging unfunded entitlement obligations, these governments no longer have any wiggle room for surgical reductions in spending. It is simply much easier for governments to reduce borrowing costs to below zero, eliminating those constraining interest payments, than admit they were wrong and reverse course.

Allowing politicians and central bankers to implement negative interest rates is like giving your teenage son a bottle of whiskey and the keys to the Ferrari─it will only lead to trouble. Arguments that the economy of the world is stable and improving does not match up with the over seven trillion dollars in mounting sovereign debt at negative interest rates that requires no interest payments.

The publicly stated reasons for eliminating cash are nothing but a red herring to fool the public into supporting this move and relinquishing their financial freedom without a fight. Criminality of all sorts will always exist with or without physical cash, but admitting to the world that the system itself will implode if ordinary people opt out of the banking system…that is what is really at stake.

Here are just some of the steps being taken to force the world into a cashless environment:

It is illegal to buy anything in France costing more than €1000 euros with physical cash. This number is down from €3000 euros just a few years ago.

Former Treasury Secretary, Larry Summers, is calling for ending the $100 bill, and wants Europe to retire the €500 euro. This would effectively remove over 50% of all physical currency currently in circulation in Europe and the U.S.

The head of the European Central Bank, Mario Draghi, along with a growing list of former and current banking officials, is calling for ending the €500 euro.

Below is the breakdown of U.S. currency. The $100 bill represents over 78% of all physical currency in circulation. Much of these $100 dollar bills, along with large denominational euros, are used as storehouses of value in many third world countries. What happens when someone in say, Zimbabwe, goes to cash in their foreign U.S. dollars and is told that hundred dollar bills are no longer recognized?

Janet Yellen, Chairman of the Federal Reserve, has said she will not rule out negative interest rates here in the US. Canada is contemplating them too, if their economy continues to falter. The writing is on the wall that the trend is toward negative, rather than positive, rates across the globe. If we reach a point in the U.S. where the Fed feels it must implement negative rates, then the capital controls already in place will only expand, and the days of paying in cash will be numbered.

Europe and Japan have crossed the Rubicon into negative rates; the euro and yen are already both compromised as currencies. To surrender our cash will only endanger each and every American on a level no different than surrendering our right to free speech and self-defense. When a government is given the power to theoretically turn-off your access to cash with a flip of a switch, then we will no longer remain free, but instead become indentured servants to a failed state.

This article in no way should be construed as an endorsement to buy or sell any security.