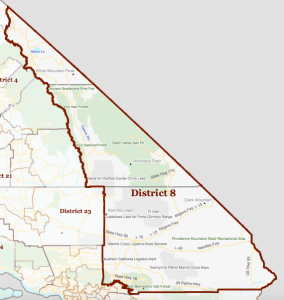 CA-08: California’s largest district by area runs from the outskirts of San Bernardino through Death Valley and along almost the entire diagonal portion of the state’s border, taking in deserts, mountains, and military installations. It is a conservative district, though represented by one of the Republican caucus’s centrist members, Paul Cook, who serves on committees dealing with the military, foreign affairs, and natural resources — the district’s key issues.

Democrats: Though the rural district might seem to favor Sanders, its military focus will give Clinton an edge.

Republicans: Trump wins the military vote, but Cruz is more organized in the region’s conservative strongholds.