Hillary Clinton today promised donors that she’ll provide Green Cards to an unlimited number of foreign college graduates, even though the resulting flood of university-trained foreign labor will drown the lifetime wages and career prospects of her college-indebted American supporters.

The open-borders promise to foreign graduates is posted at her campaign, and is titled “Hillary Clinton’s Initiative on Technology & Innovation.”

As part of a comprehensive immigration solution, Hillary would “staple” a green card to STEM masters and PhDs from accredited institutions—enabling international students who complete degrees in these fields to move to green card status.

The promise was slammed by Sen. Jeff Sessions, chairman of the Senate’s immigration panel.

“There are more college graduates in the U.S. today than at any point in our history, many have trouble finding meaningful work in their field of study. Many are underemployed, taking jobs well below their skill level simply to make ends meet … Yet, today, candidate Hillary Clinton announced that if elected president, she would ‘staple’ a green card to STEM master’s degrees and PhDs of every graduate  – enabling foreign students to get green cards and thus be able to remain in the U.S. permanently and take any job,” he said in a press release. He continued;

Young Americans graduating with master’s degrees and PhDs in these fields have sacrificed their time and energy to pursue a career in the STEM field – often at the encouragement of policymakers and national leaders – and oftentimes carry the burden of substantial student loan debt as a result. Further saturating the STEM labor market will limit their ability to obtain high-paying jobs that will allow them to pay down their debt and pursue the occupation of their choosing.

In contrast, Donald Trump has promise to reform the main H-1B guest-worker program so that companies are forced to hire Americans instead of cheaper foreign college-graduates.

Clinton’s foundation has hired many foreign guest-workers instead of Americans.

The salaries of college-educated Americans already are being suppressed by roughly 1 million foreign white-collar guest-workers holding long-term visas as students or as guest-workers with L, B and H-1B visas. Many of these guest-workers hold degrees in science, technology engineering and math — but they’re employed in many non-science jobs that can claim a link to science or math, including management, accounting, research, therapy, design, teaching, business, and much else.

White-collar wages are also being suppressed by the inflow of white-collar illegal immigrants, most of whom arrive on legal visas but stay past the visa expiration date. In 2015, for example, roughly 482,000 foreign travelers and guest-workers overstayed their visas, adding to the population of illegal immigrants. Also, California and New York are now allowing illegal immigrants to legally take professional jobs, such as law and medicine, partly because the federal government is repatriating less than 1 percent of illegal migrants each year.

Most media outlets show the guest-workers taking jobs in the high-tech sector outside Silicon Valley where average wages have been flat since 2008. But a growing percentage of the white-collar legal foreign workers are getting non-tech white-collar jobs — in health, business, design, and science. For example, universities employ roughy 22,000 guest-workers as university lecturers.

Moreover, every American displaced from the tech sector still has to find work, and so they flow into other sectors — such as journalism or management — so forcing down salaries in those sectors.

The huge supply of foreign white-collar workers has held down US white-collar salaries, according to an analysis by the Economic Politic Institute. 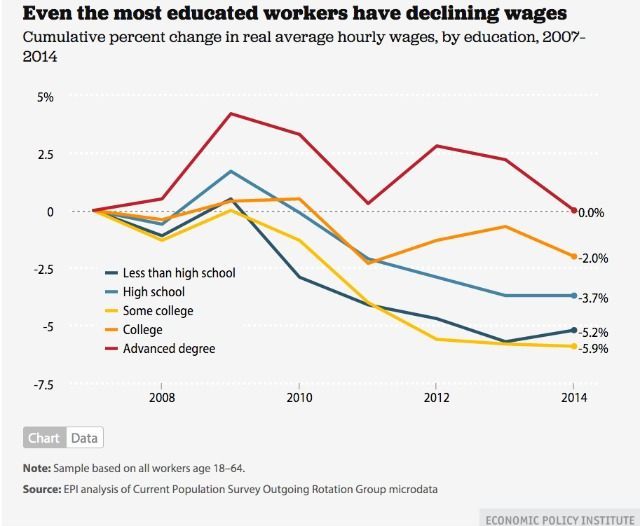 The website myvisajobs.com shows the companies and locations of many guest-workers. For example, the Deloitte accounting firm has roughly 225,000 employees worldwide. But it asked the federal government for H-1B visas to bring in 20,000 foreign business-school grads for jobs in the United States between 2012 and 2015.

Similarly, companies are already hiring more foreign students straight from US. college campuses via the little-known Optional Practical Training program, which allows foreign graduates of U.S. universities to work for 12 months or 29 months in the United States. Without approval from Congress, the program was created by George W. Bush’s appointees and is being expanded to 36 months by President Barack Obama’s appointees. In 2014, the controversial program allowed 120,000 foreign graduates to work at a very wide variety of U.S. jobs, sometime for employers who discriminate against Americans.

Many of these foreign graduates are trying to land a multi-year H-1B job.

Universities love the OPT program because it allows them to effectively sell U.S. work-permits to foreign students, and rent foreign students to companies. “We are very supportive of giving international students more opportunities because they are our alums, they are our graduates, they are the ones that are going to get better jobs because the companies are going to see that there’s more longitude to it,” Adria Baker, the director of Rice University’s office for international students. “The companies are depending on these students. They hire them because they are the best people for that field,” she said.

Foreign students openly say they pay U.S. universities for the paperwork needed to work and stay in the United States. “The primary reason I chose the U.S. was exactly that it offers better opportunities than other countries, whose immigration policies may be stricter,” Maggie Tang, a 2015 graduate of Rice, told the university newspaper. “I knew I had a chance to stay here and work, to earn back some of that tuition and gain experience,”she said.

The inflow of white-collar professionals is also a key trading-card in federal fights over immigration reforms and the Democrats push to amnesty illegal immigrants.

In general, Democrats usually promise more cheap foreign white-collar labor to prestigious companies, providing those companies lobby and pressure GOP legislators to back an amnesty for low-skill, Democratic leaning blue-collar illegal immigrants. That strategy was defeated by public opposition in 2013 — but it nearly won passage of a “Comprehensive Immigration Reform” bill that would have shifted more of the nation’s annual income to wealthy investors, and away from working Americans, according to a 2013 study by the Congressional Budget Office.

These current numbers of foreign college graduates in the United States understates the danger to American college-grads posed by Clinton’s new policy.

That’s because many more foreign graduates will gladly pay tuition to U.S. colleges because Clinton’s stapling plan would put them on a fast-track to the golden prize of Green Cards and citizenship. That’s a huge payoff for a few years of tuition because it would mean that all of those students’  descendants will be Americans, and also that their parents get to join the American retirement system.