This billboard will be featured in Kenosha and Burlington, Wisconsin. 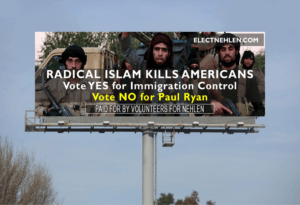 “My team and I are hearing the impact of the billboard on voters at the doors. There are more billboards to come. We raised over $30,000 on the first billboard,” Nehlen told Breitbart. “This goes to show the decades of Paul Ryan operating the levers of big government are over.”

Paul Ryan has a two-decade history of working to expand the number of foreign workers entering the country to compete for U.S. jobs and drive down American wages.

Ryan’s plan quadrupled the number of H-2B foreign worker visas—a measure, which was in direct violation of Ryan’s pledge not bring up major immigration legislation as House Speaker while President Obama was still in office.

A 2015 Buzzfeed expose revealed how the H-2B foreign worker program allows businesses to discriminate against American workers and “deliberately den[y] jobs to American workers so they can hire foreign workers on H-2 visas instead.” At the time of the omnibus’ passage, one GOP aide told Breitbart News that, “this provision is a knife in the heart of the working class, and African Americans.”

In a December radio interview with Bill Bennett, Ryan was asked directly: “Do you believe there are not enough Americans to fill these jobs?”

Ryan warned that without foreign workers, American business would have to close their doors:

There are currently over 94 million Americans not in the labor force, yet cries of so-called “labor shortages” are frequently invoked by politicians who want to see large increases in low-wage labor.

However, in a 2013 interview with the National Journal, which is prominently featured on Ryan’s website, Ryan was more direct in explaining why he believes the U.S. should import more low-skilled workers to compete for American jobs.

In an article entitled, “Paul Ryan: Immigrants Bring Labor to Our Economy So Jobs Can Get Done,” Ryan explains that having an influx of low-skilled workers helps employers keep wages low:

[Low-skilled immigrants] bring labor to our economy so jobs can get done. The dairy farmers in western Wisconsin are having a hard time finding anyone to help them produce their products, which are mostly cheese. If they can’t find workers, then they can’t produce, and we’ll end up importing. The flip side of the argument is: Just raise wages enough to attract people. But you raise wages too much in certain industries, then you’ll get rid of those industries, and we’ll just have to import.

“Ryan’s argument about low wages being good for the country is very strange,” said the Center for Immigration Studies’ Steve Camarota.

Keeping wages low may be good for some employers, but not taxpayers. By design, low-wage workers pay relatively little in taxes, but tend to use a lot in public services. For example, 77% of working households headed by an immigrant without a high school education use welfare. Employers may not see these costs, but they are very real for taxpayers. When we look at the impact on American workers or American taxpayers, it’s extremely hard to argue that bringing in low-skilled workers makes sense.

Yet Ryan has repeatedly made clear that he supports enacting an open borders immigration system that would allow people to freely and legally enter the country without any firm limits. In essence, what the EU has among solely European countries – which the U.K. rejected with its “Brexit” vote – Ryan would like America to have with every country on the planet.

In 2013, while he was stumping with Luis Gutierrez on behalf of Sen. Marco Rubio’s amnesty agenda, Ryan called for an “open door” system:

We want to have a system where people can come here and work– go back and forth if they want to… so that we have an open door to the people who want to come and contribute to our country, who want to come and make a difference in their families’ lives, and our economy.

Ryan explained that, “We want an economic based immigration system where… labor and supply and demand can meet each other so we can help fuel our economy and create jobs.”

The phrase “labor supply and demand can meet each other,” is a centerpiece of open borders thought. Under this global one-world theory, any willing employer should be able to hire any willing worker regardless of what country they live in. Under this theory, there is no limitation whatsoever to the amount of labor that can be imported into the country and, thus, there is no preference given to American citizens for jobs.

We need to let legal immigrants come here legally. We can’t have a system where we pay homage and adherence to the rule of law if we don’t have an open system where people can come here in search of their American dream, where the work that won’t be done by people who are already here can be filled by the people who want to come here and do those jobs.

However, Ryan’s statement is simply not logical—the U.S. already has the most expansive immigration policy in the world, letting tens of millions of foreign nationals legally enter the U.S., vote in U.S. elections, and claim U.S benefits.

Yet Paul Ryan has pushed policies that would make these figures even larger.

Polling data from Kellyanne Conway’s The Polling Company found that only four percent of the entire country believes that American workers should not get preference for jobs over those applying from foreign countries.

However, Ryan goes even further than the four percent by suggesting there should be no limits at all – that employers should be able to legally hire foreigners whenever they want and in any quantity.

Conway found that Hispanics, by nearly a seven to one ratio, want employers to hire workers already in the country rather than importing foreign workers to fill jobs. Black voters support this measure by a ratio of almost 30 to 1.

In a February interview with Maria Bartiromo, Ryan admitted that he has no intention of bringing up legislation desired by the overwhelming majority of the American electorate to curb the rapid growth of America’s foreign-born population.

“We’re not going to be talking about visa caps in our agenda,” Ryan told Bartiromo.