The paper’s headline tried to feebly hide Obama’s failure behind a sliver of supposedly good news: “How a Muslim advocacy group in Florida is doing what the government has so far failed to do.”

The article repeatedly describes the failure of Obama’s anti-jihadi strategy to win support from hard-line Islamic political groups, or even the cooperation of mosque clerics who declare themselves to be legitimate political leaders of Muslims living inside the United States.

An FBI plan …  only heightened suspicions among some civil rights and Muslim community leaders … Meanwhile, in Boston, Los Angeles and Minneapolis, federal pilot programs announced in 2014 to prevent extremism have met such fierce resistance from local Muslims that the first two remain mired in the developmental stage. In Minneapolis, officials were compelled to change the program’s name from “Countering Violent Extremism” to “Building Community Resilience.”

The article ends up cheerleading for the creation of Muslim-run police-like groups in Muslim neighborhoods — which would be a big step toward the creation of self-segregating Islamic-run enclaves within the United States.

But the Post also distances Obama from his own failure — his surname is mentioned only once in the article, and the blame for his failure is shoved into the hands of the FBI, whose operations are handcuffed by Obama’s failed strategy, dubbed the “countering violent extremism” strategy.

That failed Obama strategy forces FBI officials to ignore Islam’s ideology– including its promise of divine rewards for jihad — when agents investigate jihadi plotters. Instead of developing their own cultural understanding and religious incentives, FBI official can only focus on secular actions — such as when a Muslim buys a gun, or aiding actual terror groups — when seeking arrest warrants. In effect, Obama’s CVE strategy forces the FBI to treat orthodox Muslims and pacifist Amish as similar threats, even as Obama rapidly grows the Muslim population in the United States.

In contrast, FBI officials who are investigating organized crime are allowed to consider financial rewards for crime, such as suitcases of money.

The Washington Post also ignores the dictates of Islamic ideology, although some of its readers’ comments cite chapter-and-verse from Islam’s demands for killing and war. 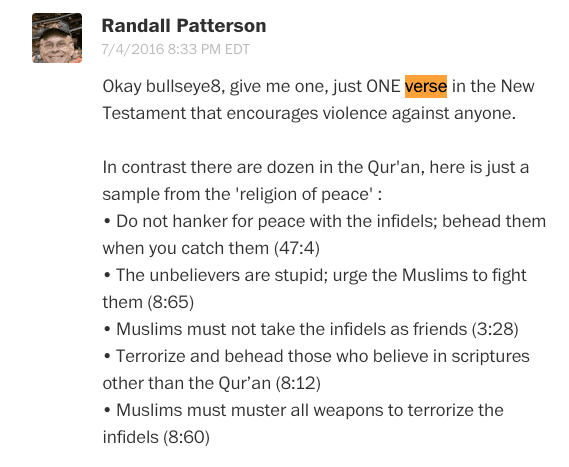 Obama’s failure to control domestic jihad is highlighted by the death toll during his tenure, but also by the rising number of jihad-linked attacks, plots and advocacy during his tenure. For example, the rising level of Muslim terrorism since 2012 was graphically illustrated  in a February 2016 study by Duke University’s Triangle Center on Terrorism and Homeland Security. 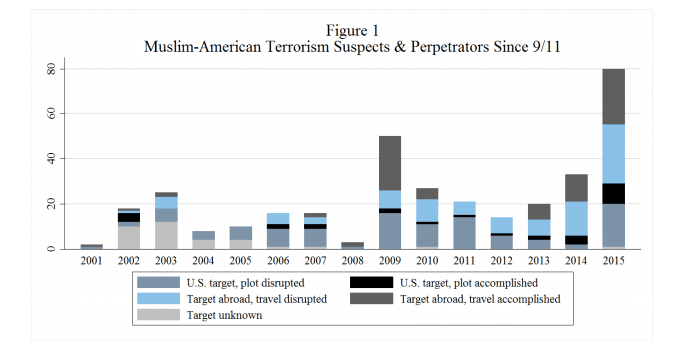 Obama’s failure has also been noted by Breitbart, the Associated Press and by Donald Trump. Attacks and threats against Muslims are rising, along with suspicion and fears, Trump says. “I’m not trying to scare you,” he said, “but that is where we are right now.” Polls show the public is increasingly backing Trump’s security reform — the exclusion of additional Islamic supporters from the United States.

The Post, however played down the bloody consequences of Obama’s failure. The article gives one sentence to the June 12 murder of 49 American at the Pulse nightclub, but does not mention the 9/11 atrocity, the 2015 San Bernardino massacre or any of the many other Muslim attacks on peaceful Americans.

Overall, the Washington Post‘s article is actually sympathetic to the Islamic political groups and unintegrated Muslim populations who are rejecting Obama’s CVE strategy.

Under that would-be strategy, oversight of Islamic communities is handed to government-approved Islamic leaders — typically from groups tied to the Muslim Brotherhood — in exchange for a promise to suppress and sideline angry young Muslims. To sweeten the bargain, Obama is offering federal funding, government support and a role in Democratic Party politics, plus the opportunity to create self-segregating Islamic communities.

Obama policy does not make any effort to recruit non-political and non-religious local leaders to held curb jihadi sentiments. Those alternative leaders could be local politicians, local merchants, former Muslims or reformist Muslims.

Obama’s failed offer to the Islamic political groups is dramatic, in part, because most Muslims in American do not see the Obama-backed Islamic groups as representing them.

Roughly half of the supposed Muslims in the United States are not religious, according to the Pew report.

The Post favorably quotes Islamic advocates who reject security cooperation with the federal government, supposedly, because to do so would tighten the extensively documented links between Islam and terrorism in the United States.

… the public knows very little about how these programs are being structured, implemented and financed, and to what end,” said Hina Shamsi, the director of the American Civil Liberties Union’s National Security Project … Without that information, she and others say, ordinary civilians like teachers and counselors could be asked to identify and “intervene” on behalf of people they suspect are likely to commit a future crime, a practice so vague that civil rights groups warn it could be more harmful than helpful.

“They should consider the worst-case scenario,” said Naureen Shah, who directs the security and human rights program at Amnesty International USA … “What if your [countering violent extremism] program is in the hands of one of my [former] high school teachers in Texas who thinks that all Muslims are terrorists?” Shah asked. “You can assume good faith, but you also need to assume prejudice because of the constant association between Muslims and terrorism in society.”

Those complaints echo complaints from other Islamic advocates. For example, “the leadership of the Islamic Shura Council of Southern California overwhelmingly rejected the program,“ another Muslim advocate, Ahmed Shaikh, boasted March 3, 2016. He continued;

The premise that Mosque leaders have the ability to identify future criminality in their own community is troublesome … leaders do not generally conduct programing at Mosques with a view towards terrorism prevention … [but] Muslim leaders should still stay away from this program, as it has no benefit [to Muslims].

The broad opposition to Obama’s CVE strategy was sketched out by another Islamic advocate, Margari Aziza Hill.

Linda Sarsour wrote an article with Deepa Iyer on the CVE summit and appeared on Rachel Maddow Show to talk about the discussion around Islam and terrorism in politics. Haroon Manjlai, Public Affairs Coordinator of Council on American Islamic Relations (CAIR-LA), explains to me, “Given the potential of CVE programs to impact first amendment freedoms and protected activities and its potential of criminalizing the Muslim community, [there] is a cause for concern and it is something that CAIR does not agree to and sign off [on].” In an op-ed in AlJazeera, Abdul Sattar Ghazali recounts how Keith Ellison, the first Muslim American representative in congress explained how the, “targeting and prosecution of Muslims only reinforces extremist behavior.”

The Washington Post‘s article even dumped on a fallback plan in which FBI officials would delegate basic law-enforcement duties to picked groups of Muslim counselors.

That’s an unprecedented proposal because the FBI never delegated basic law-enforcement duties to Catholic Church leaders in mafia-ridden Italian neighborhoods and is not doing so now in gang-afflicted Central American neighborhoods in Los Angeles. Even that modest cooperation from Muslim groups is too much, Islamic groups complain, according to the Post.

An FBI plan, first reported by the Intercept, to build its own intervention teams called Shared Responsibility Committees — not unlike CAIR-Florida’s teams in terms of make-up, but hand-picked and vetted by the bureau to provide counseling to individuals already under investigation — only heightened suspicions among some civil rights and Muslim community leaders … [even though] the FBI would not use the committees for intelligence gathering, said the official, who was not authorized to speak publicly about the program and was granted anonymity. Committee members could, however, be subpoenaed to testify and turn over documents if the individual were subsequently charged, the official added.

After admitting that Obama’s policies have failed, The Washington Post then lauds a plan by unrepresentative Muslim political groups to police Muslim neighborhood without involvement by U.S. federal or local governments — which is a big step towards the creation of Muslim-run enclaves within American neighborhoods.

The cheerleading for Islamic-run security begins in the first paragraphs and occupies much of the article.

MIRAMAR, Fla. — Nezar Hamze stood before those crowded into the mosque’s prayer room, speaking through his headset mic. He explained their rights to ­self-defense and talked up the benefits of home security systems. And had all the women received their complimentary canisters of pepper spray? Nods spread across the room.

Good, said Hamze, nodding, too. “I want to move on to extremism.”

It had been 10 days since Omar Mateen, a self-declared adherent to the Islamic State, massacred 49 people at an Orlando nightclub. And Hamze, a police officer in the Broward County Sheriff’s Office, wanted to prepare this mosque’s congregants for what might come next.

Attacks and threats against Muslims are rising, along with suspicion and fears, he told several dozen men, women and children seated on folding chairs. “I’m not trying to scare you,” he said, “but that is where we are right now.”…

At mosques across South Florida, he tells congregants about CAIR-Florida’s new intervention teams, made up of mental health professionals, social services workers, religious leaders and others. Since the program started nine months ago, mosque members have called on the teams seven times, Hamze said. In a few of those cases, the team contacted law enforcement …

If anyone is concerned that a relative, friend or community member might be “going down the wrong path,” don’t just avoid them, Hamze told his audience in this suburb of Miami.

“Surround them with love,” he said. “And you don’t have to do it alone. All you have to do is pick up the phone.”…

A few days after giving the safety and security lecture at the mosque in Miramar, he was called suddenly by leaders at another mosque to attend to a man showing signs of “mental distress,” Hamze said.

The man, an Egyptian American who had served in the U.S. military and acknowledged that he had been diagnosed as bipolar and as having post-traumatic stress disorder, was talking about “killing the non-believers.” Hamze spoke with the man and got fellow law enforcement officers involved. The man was committed to a mental health facility.

The article did not try to explain the Islamic doctrines that would nudge an insane man to expiate his insanity by shooting non-Muslims, instead of — for example — dressing up as Napoleon.

The article notes that Hamze works for the Council on American Islamic Relations — but it does not tell readers that CAIR is very closely tied to jihad groups, and that it favors the creation of Muslim-governed communities inside the United States.

U.S. court documents and news reports show that at least five of CAIR’s people — either board members, employees or former employees — have been jailed or repatriated for various financial and terror-related offenses. The evidence highlighted by critics shows that CAIR was named an unindicted co-conspirator in a Texas-based criminal effort to deliver $12 million to the Jew-hating HAMAS jihad group, that CAIR was founded with $490,000 from HAMAS, and that the FBI bans top-level meetings with CAIR officials. “The FBI policy restricting a formal relationship with CAIR remains … [but] does not preclude communication regarding investigative activity or allegations of civil rights violations,” said an Oct. 2015 email from FBI spokesman Christopher Allen.