If elected president, Hillary Clinton could permanently resettle close to one million Muslim migrants during the first term of her presidency alone, according to the latest available data from the Department of Homeland Security (DHS).

Based on the most recent available DHS data, the U.S. permanently resettled roughly 149,000 migrants from predominantly Muslim countries on green cards in 2014. Yet Clinton has said that, as President, she would expand Muslim migration by importing an additional 65,000 Syrian refugees into the United States during the course of a single fiscal year. Clinton has made no indication that she would limit her proposed Syrian refugee program to one year.

Clinton’s Syrian refugees would come on top of the tens of thousands of refugees the U.S. already admits from Muslim countries.

Adding Clinton’s 65,000 Syrian refugees to the approximately 149,000 Muslim migrants the U.S. resettled on green cards in the course of one year, means that Clinton could permanently resettle roughly 214,000 Muslim migrants in her first year as President. If Clinton were to continue her Syrian refugee program throughout her Presidency, she could potentially resettle as many as 856,000 during her first term alone.

Analysis from the Senate Immigration Subcommittee found that Clinton’s plan to expand refugee resettlement could cost U.S. taxpayers over $400 billion.

Additionally, once Clinton’s Syrian refugees are in the U.S. as green card holders, they will have the ability to bring over their family members through chain migration.

Yet Clinton’s expansion to Muslim migration would be in addition to her expansion for immigration overall.

U.S. Census data shows that if a President Hillary Clinton were successful in passing a Gang of Eight-style immigration expansion bill, the U.S. could permanently resettle roughly 9.4 million migrants throughout the nation during her first term alone. This figure does not include the additional 11 million illegal immigrants already here to whom Clinton has promised amnesty and U.S. citizenship.

Clinton’s desire to expand immigration is shared by GOP House Speaker Paul Ryan, who leads the pro-Islamic migration wing of the Republican Party.

At times, Ryan has even echoed Clinton’s rhetoric in his efforts to denounce Trump and Trump’s proposals. 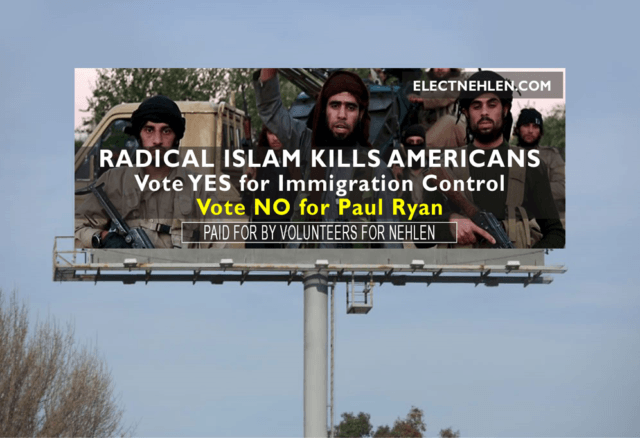 Paul Ryan has a two-decade long history of supporting open borders immigration policies, even though, according to Pew polling data, 92% of GOP voters and 83% of American voters overall want to see immigration levels frozen or reduced.

Clinton wants to allow Radical Islamic terrorists to pour into our country—they enslave women, and murder gays. I don’t want them in our country. Immigration is a privilege, and we should not let anyone into this country who doesn’t support our communities – all of our communities… The burden is on Hillary Clinton to tell us why she believes immigration from these dangerous countries should be increased without any effective system to screen who we are bringing in. The burden is on Hillary Clinton to tell us why we should admit anyone into our country who supports violence of any kind against gay and lesbian Americans. The burden is also on Hillary Clinton to tell us how she will pay for it. Her plan will cost Americans hundreds of billions of dollars long-term. Wouldn’t this money be better spent on rebuilding America for our current population, including the many poor people already living here? […]

America has already admitted four times more immigrants than any country on earth, and we continue to admit millions more with no real checks or scrutiny. Not surprisingly, wages for our workers haven’t budged in many years. So whether it’s matter of national security, or financial security, we can’t afford to keep on going like this. We owe $19 trillion in debt, and no longer have options. All our communities, from all backgrounds, are ready for some relief. This is not an act of offense against anyone; it is an act of defense.