A consumer protest by Americans has successfully forced Target Corp. to walk a few steps away from its disastrous $10 billion decision to back the radical transgender lobby.

Instead of opening all bathrooms and changing rooms to both sexes — for the benefit of a small number of transgender people — as the company promised in April, it is now set to spend $20 million on building new lockable, single-user restrooms.

However, Target is still insisting that it won’t offer single-sex changing rooms to customers. Instead, Target’s changing rooms remain open to both sexes as a sign of support for sexually mixed transgender people.

A spokesperson for the retailer admitted that the new bathroom expenditure is a reaction to feedback from angry customers.

But Cathy Smith, Target’s finance chief, insisted that the massive losses seen since April have nothing to do with company’s decision to implement the radical gay lobby’s agenda of suppressing the differences between men and women. But she Smith did admit that many customers have told the company that its policy is disliked. “It’s clear that some of our guests like and some dislike our inclusive bathroom policy,” Smith told reporters as she reported on the $20 million expenditure on new bathrooms, according to Fortune magazine.

In its original April 19 statement, Target portrayed the decision as protecting rights of a few transgender people, saying  “we welcome transgender team members and [customer] guests to use the restroom or fitting room facility that corresponds with their gender identity.”

But the “gender identity” term largely hides the far-reaching ambition of the transgender ideology. That ideology says that people are free to pick their own sex –regardless of biology — and that government should force Americans to accept each person’s “gender identity,” and also to end normal deference to the different needs and preferences of men and women.

To implement that ideology, President Barack Obama and other progressives are now barring K-12 schools, agencies and federal parks and government-funded homeless shelters from offering any single-sex bathrooms or showers, and they’re allowing transgender people to serve as soldiers. They’re also threatening opponents with lawsuits and funding-cuts.

Polls show that ideology is very unpopular. A study of the 2010 census reported that only 1 in 2,400 American adults change their names from one sex to another.

When Target announced its cooperation with the transgender ideology, the resulting consumer boycott reached 1.2 million supporters in only a month. The opposition did much damage to the company’s brand, and a massive sell-off on Wall Street chopped the company’s share price from almost $84 on April 19 to $75.70 on May 11, cutting $10 billion from its value on Wall Street.

The value slowly recovered, but fell on August 17 when Target admitted that its net income fell to $680 million during the boycott, down from $753 million a year ago. Total sales fell to $16.7 billion, down from $17.43 billion. That news slashed the company’s value on Wall Street by $3 billion. 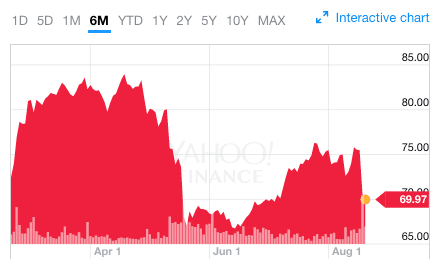 Despite the massive loss, Target’s CEO initially insisted the bathroom policy had noting to do with its losses, defended it, and insisted the company had no intentions of changing the policy.

Meanwhile, rival  retailer Walmart has reported a major jump in share value — from $69 per share in mid-April to $74 per share in mid-August — and has just beat its projection on earnings and sales, USA Today reported.