KING OF PRUSSIA, Pennsylvania — Republican presidential nominee Donald Trump and his running mate, Indiana Gov. Mike Pence, made one of their last joint appearances before Election Day near the site of George Washington’s historic winter encampment on Tuesday. Their focus: repealing and replacing Obamacare.

Pence took the lead, with Trump deferring to his running mate’s extensive experience in innovation in health care policy.

In January 2015, Gov. Pence launched the Healthy Indiana Plan, or HIP 2.0. The plan is a modified version of the Medicaid expansion that many other conservative governors, such as Wisconsin Gov. Scott Walker, have rejected (and which some had promised to reject, but later accepted). It expands Medicaid to those living within 138% of the poverty level, but also requires them to make contributions to their own health insurance, on a sliding income-based scale.

Pence had to negotiate with President Barack Obama to receive approval for his modifications, and faced criticism from conservatives for accepting any part of Obamacare. But he defended his decision in an op-ed in the Indianapolis Star in January: “Obamacare did not create the Healthy Indiana Plan. HIP existed before Obamacare, and it will exist after Obamacare.” He said Obamacare’s repeal would require a transition period, but the program would survive.

The contributions are made to a health savings account called a Personal Wellness and Responsibility (POWER) account, building on a program started by Pence’s predecessor, Mitch Daniels. And the policy has largely been a success. Earlier this year, Gov. Pence announced that HIP 2.0 patients had reduced emergency room visits by 40% and that 70 percent of participants were paying into their POWER accounts.

On Tuesday, Pence touted that experience.

“I stand before you today, because today open enrollment begins on the Obamacare exchanges. And once again, millions of Americans are going to be disappointed by their lack of options, and, frankly, shocked by the high premiums and the cost of health insurance. This government takeover of health care that we call Obamacare is failing in states across America, as it is here in Pennsylvania, and the case has never been stronger for repeal.”

“Americans are putting their personal health second because Obamacare’s skyrocketing costs are too expensive and too burdensome,” Pence warned.

He recalled that Hillary Clinton had not only backed Obamacare, but claimed credit for inspiring it. He reminded the audience “Before it was called Obamacare, it was called Hillarycare.” He also reminded them that President Obama had compared the program to the disastrous Samsung Galaxy 7 smartphone (which was notorious for bursting into flames, due to battery problems). And he noted that that even former Bill Clinton had said: “The costs are going up, coverage is going down, it’s the craziest thing in the world.”

“I guess even with a Clinton, sometimes truth happens,” Pence quipped, to applause.

In a Trump presidency, he said, “we’re going to repeal Obamacare — lock, stock, and barrel.” He then went on to explain what would replace it, using the free market — and without growing the government.

Pence noted that HSAs were pioneered in Indiana, and that the Trump plan would provide support directly to individuals using HSAs, rather than to insurance companies from whom individuals were forced to buy insurance under the current system. He called Medicaid “broken,” noting that “Obamacare has put a majority of the people receiving new coverage into a broken system.” And he touted the reforms he had made under HIP 2.0 as an example of how states can innovate.

He concluded: “Obamacare is a catastrophic failure. Hillary Clinton says she wants to double down on that failure … We can make health care in America great again.”

Pence introduced Donald Trump, who was greeted with familiar enthusiasm by the audience. 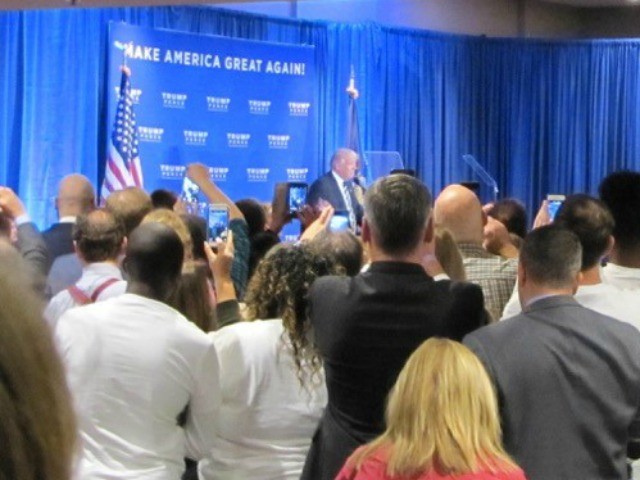 Trump pledged to ask Congress to convene a special session to repeal and replace Obamacare, warning that premiums in Pennsylvania would increase more than 60%.

He warned that health care costs were overwhelming families’ ability to pay their bills, and even their mortgages. He warned that millennials and young people would face an “unfair” situation due to Obamacare, where they “will be totally crushed by these massive health care costs before they even get started on their journey through life.” And he noted that local residents only had one insurance provider from which to choose, in one-third of Pennsylvania counties including Philadelphia.

“Hillary Clinton wants to expand Obamacare and make it even more expensive. She wants to put the government totally in charge of health care in America,” he said.

“If we don’t repeal and replace Obamacare, we will destroy American health care forever. It’s one of the single most important reasons why we must win on November 8th. We must win.”

As Pence did, Trump outlined the basic elements of his replacement plan.

“Our replacement plan includes Health Savings Accounts, a nationwide insurance market where you can purchase across state lines, and letting states manage Medicaid dollars. So much better.

“We will create quality, reliable, affordable health care in a free market where parents can make the health care decisions that they really want to make for their families. It will be a much better health care at a much less expensive cost.”

Pence was introduced by Dr. Ben Carson, who was one of Trump’s rivals in the primary, and later endorsed him. “We’re going to bring the power back to the people and to the health providers,” he said of Trump’s plans to replace Obamacare.

(Trump returned the favor in his own remarks, saying he hoped Carson would serve in his administration.)

Local Pennsylvania resident Ray Ballone was asked if, as some have suggested, a Hillary Clinton administration would be wrought with scandal and investigations.“Four years of that — scandals,” he told Breitbart News. 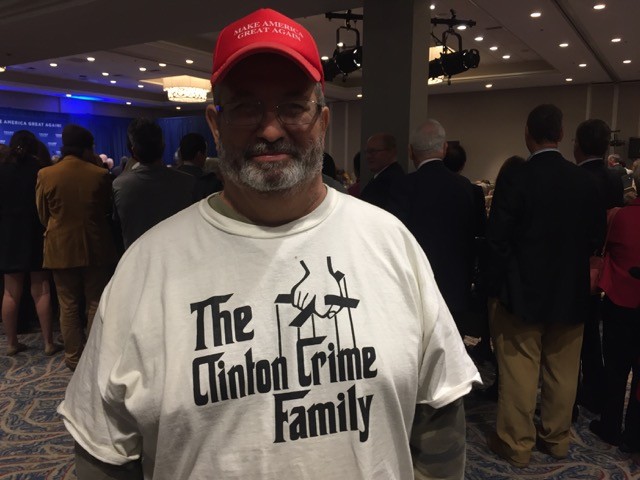 Ballone said that he had been a supporter of Dr. Ben Carson for president, but now supports Trump.
Another Trump supporter, Nick Xu, told Breitbart News that he is a legal Chinese immigrant to the United States and has been volunteering for two months on the Trump campaign. He said that he is a naturalized U.S. citizen.
“I like his policy. I myself [am] an immigrant from China. I went to school in Russia,” said Xu, who added that he speaks Russian, Chinese and English. “I’m a immigrant. I’m a minority here, but I like his policy.” 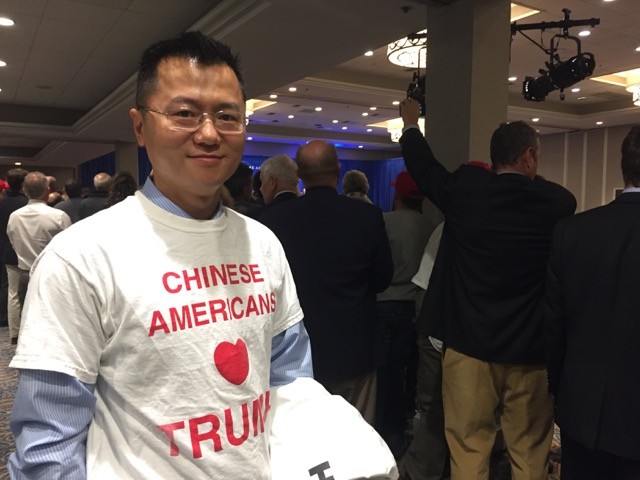 Xu added that “the media has a lot of bias[ed] report[ing] on Trump. It’s not true. I watch his speech[es] myself on YouTube, you know the full speech. So I like his policy about, you know, bring[ing] back jobs, national security, you know, immigration, because the current administration, you know, put illegal immigrant[s] over legal immigrant[s] and I don’t like that. I went through the whole process. It took me eight years to get [a]green card and another five years to get citizenship. And I had to — I work, I pay tax.”

Sen. John Barasso (R-WY) had kicked off the event. He reminded the audience that Pennsylvania is facing steep double-digit increases in health insurance premiums under Obamacare next year. And, he added, “What does Hillary Clinton say about this? More obamacare. What does Bill Clinton say about this? ‘Craziest thing I ever saw!’,” to laughter and applause.

Rep. Tom Price (R-GA), who is also a physician, led a group of House members onstage, many of whom have medical degrees or expertise. Rep. Michael Burgess (R-TX) said: “Many of us watched in horror in 2009 and 20010 as no Republicans were consulted and this thing was rammed through,” noting that then-White House chief of staff Rahm Emanuel exploited one crisis, only to create another.

Rep. Renee Elmers (R-NC), who noted the strong presence of women in the room, mocked President Barack Obama’s comparison of Obamacare to a first home: “If it’s a house, it’s an outhouse,” she said, to laughter.