That’s a huge increase given the establishment’s hostility directed at Trump, and it also contradicts the pro-amnesty claims made in business-backed GOP reports after Romney’s failed 2012 run.

The GOP’s so-called autopsy report — which was drafted, reviewed and reshaped by hundreds of business-funded consultants, lobbyists and pollster, declared:

among the steps Republicans take in the Hispanic community and beyond, we must embrace and champion comprehensive immigration reform. If we do not, our Party’s appeal will continue to shrink to its core constituencies only. We also believe that comprehensive immigration reform is consistent with Republican economic policies that promote job growth and opportunity for all.

In 2013, Trump ridiculed the autopsy when it was published.

.@RNC report was written by the ruling class of consultants who blew the election. Short on ideas. Just giving excuses to donors.

During the subsequent immigration debate in 2013 and 2014, the GOP’s base voters blocked the amnesty bill drafted by Democrats and business leaders. Those voters also defeated the GOP’s majority leader, Rep. Eric Cantor, and subsequently picked Trump in the GOP primaries largely because of his opposition to amnesty. Florida Sen. Marco Rubio was defeated during the presidential primary, chiefly because of his support for amnesty — and so he lost his chance to run against Hillary Clinton in 2016. 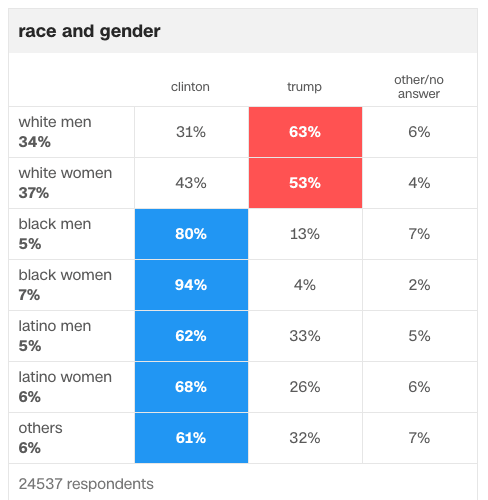 In practice, those vote shares would have boosted his national vote by one percent from African-Americans and almost three percent from Latinos.

That GOP performance among minorities is the best since 2004, when President George W. Bush won 40 percent of the smaller Latino vote during the economic bubble that had created so many temporary jobs for American Latinos and for illegal immigrants — but which eventually allowed the election of President Barack Obama in 2016.