Along with the loss of biodiversity, a new ice age and the decimation of coffee production, climate alarmists are now saying that we can say goodbye to beautiful weather for picnics and weddings, thanks to “global warming.”

In its projection of “nice weather,” a study in the journal Climatic Change projects that on average, earth will have “10 fewer days of mild and mostly dry weather by the end of the century.”

“It’s the type of weather where you can go outside and do something fun,” said lead author Karin van der Wiel, a meteorology researcher at Princeton University and the National Oceanic and Atmospheric Administration . “It’s not too cold. It’s not too hot. It’s not too humid.”

The authors define “mild weather” as between 68 and 86 degrees Fahrenheit with low humidity and negligible rainfall.

According to the study, the change predicted would not be a loss for all. In England and northern Europe, for instance, weather is supposed to get better, not worse. In the U.S., Seattle will get an extra nine mild days a year and Los Angeles should pick up six nice days a year by the end of the century, the report prophesies.

Of course, the entire study is predicated upon the ability of climate scientists to accurately predict what the weather will look like next month, next year, and for the next hundred years, a presumption not shared by all scientists.

Dr. Duane Thresher, for instance, a climate scientist with a PhD from Columbia University and NASA GISS, contends that climate forecasting is akin to alchemy, superstition posing as science.

“Climate models are just more complex/chaotic weather models, which have a theoretical maximum predictive ability of just 10 days into the future,” he notes. “Predicting climate decades or even just years into the future is a lie, albeit a useful one for publication and funding.”

Undaunted, climate alarmists continue to issue their ultimatums: either the developed world stop eating meat, driving big cars and using air conditioning, or the earth is headed for Armageddon.

Last November, the online journal Business Insider ran a threatening scare piece titled “7 foods that could go extinct thanks to climate change,” warning that global warming is “endangering some of the most popular and delicious foods on the planet.”

On Thursday, the UK’s climate alarmism flagship, the Guardian, said that ten species are on the verge of extinction, once again thanks to anthropogenic climate change.

Say “adios” to Hawaiian honeycreepers, Bramble Cay melomys, and sea turtles, the Guardian warns, thanks to “the destructiveness of our species.”

Apparently, purveying panic doesn’t pay awfully well, however. The Guardian ends its apocalyptic story with an appeal for funds to prop up its flagging revenues from subscriptions. 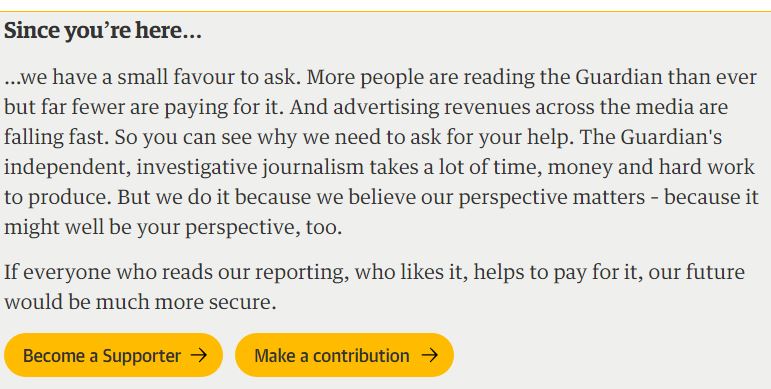