“Global warming” is a myth — so say 80 graphs from 58 peer-reviewed scientific papers published in 2017.

In other words, the so-called “Consensus” on global warming is a massive lie. And Donald Trump was quite right to quit the Paris agreement which pretended that the massive lie was true.

By “global warming” these papers don’t, of course, mean the mild warming of around 0.8 degrees Celsius that the planet has experienced since the middle of the 19th century as the world crawled out of the Little Ice Age. Pretty much everyone, alarmists and skeptics alike, is agreed on that.

Rather, they mean “global warming” in the sense that is most commonly used today by grant-troughing scientists, and huxter politicians, and scaremongering green activists, and brainwashed mainstream media (MSM) environmental correspondents. “Global warming” as in the scary, historically unprecedented, primarily man-made phenomenon which we must address urgently before the icecaps melt and the Pacific islands disappear beneath the waves and all the baby polar bears drown.

What all these papers argue in their different ways is that the alarmist version of global warming — aka Catastrophic Anthropogenic Global Warming (CAGW) — is a fake artefact.

That is, all these different experts from around the world — China, Russia, Canada, the U.S., Italy, etc. — have been looking closely at different aspects of the global warming puzzle in various regions and on different timescales and come to the conclusion in irreproachable, peer-reviewed scientific ways that there is no evidence to support the global warming scare story.

Late 20th century and early 21st century global warming, they show, is neither dramatic, nor unusual, nor scary.

Here, as collated by Kenneth Richard at No Tricks Zone, are just some of the charts to prove it.

Büntgen et al, below, shows that temperatures in the northern hemisphere were warmer in the early 1400s than they are today

Abrantes et al (below) confirms the traditional view — which Michael Mann tried to dismiss with his discredited Hockey Stick chart — that the Medieval Warming Period was warmer than anything we have experienced in our own era.

Here’s one from Li et al showing that China was much warmer 8,000 years ago 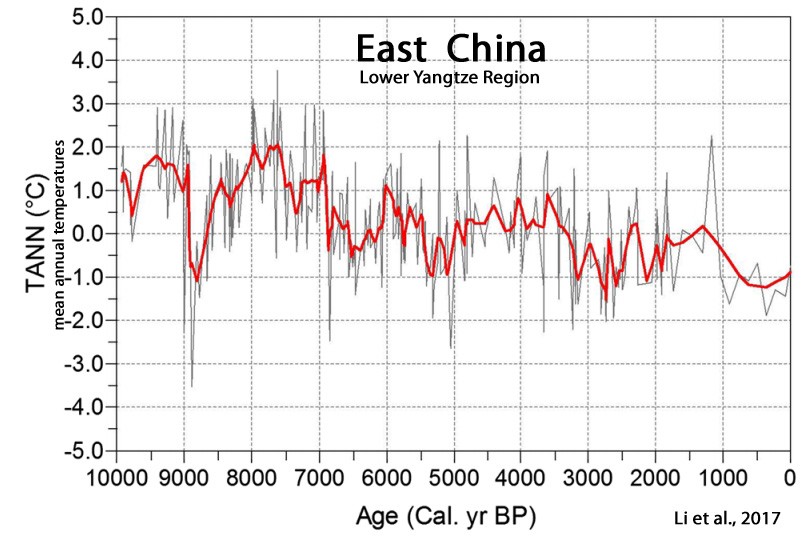 Here’s an unusual one from Guillet et al suggesting that there’s nothing new about wildly early or late grape harvests through the centuries:

And on and on it goes — there are 80 graphs in all, each showing in its different way why the scare about global warming has been horribly overdone because the evidence just doesn’t support its being unusual or a problem. Several of the papers note that the primary influence on warming appears to be solar activity. Few, if any, entertain the notion that carbon dioxide levels have much to do with it.

The intellectually corrupt and mendacious alarmist science establishment — I’m thinking, for example, of my personal bete noir, the left-wing political activist and Nobel-prizewinning geneticist Sir Paul Nurse, former president of the Royal Society — would have us believe that climate skepticism is a minority activity, the preserve of a few cranks, championed only by people who don’t do the science. But this is just ugly propaganda.

Here are dozens of reputable scientists from around the world with no axe to grind collaborating on studies which all corroborate, independently and rigorously, the increasingly respectable view that “man-made global warming” just isn’t a thing.

Not that it ever was a thing, really. This debate — as I argue at some length in Watermelons — was always about left-wing ideology, quasi-religious hysteria, and “follow the money” corruption, never about “science.”

Still, it’s always a comfort to know that “the science” is on our side too.

They do so hate that fact, the Greenies.