Rep. Claudia Tenney (R-NY) received a threatening email on Wednesday morning with the subject line “One down, 216 to go…”

This occurred shortly after a shooter opened fire on Republican lawmakers and staff who were practicing for a charity baseball game at a park in Alexandria, Virginia.

“Did you NOT expect this?” said the email, a screenshot of which was obtained from Tenney’s office by Breitbart News.

“When you take away ordinary peoples very lives in order to pay off the wealthiest among us, your own lives are forfeit. Certainly, your souls and morality were lost long before. Good riddance,” said the sender, who was not identified.

A spokeswoman for Tenney called the email “really unfortunate.”

“We get threats similar to this all the time, but this was particularly disturbing and disheartening given this morning’s tragic events,” said Tenney spokeswoman Hannah Andrews.

“The political discouse is just terrible,” she told Breitbart. “It’s getting out of control.”

Hodgkinson’s Facebook page showed he was a fierce critic of Republicans and President Trump, and had supported Sen. Bernie Sanders (I-VT) in the presidential election.

Andrews said Tenney’s son — an active duty Marine who is currently deployed to the Middle East — has also received a comment wishing he would die, on Memorial Day.

“Waiting on your son to come back bagged,” a man who identified himself as Paul Klumbach wrote on May 26.

Tenney has also received comments on her Facebook page expressing hope that she would break her neck while riding a motorcycle at Rolling Thunder, a parade in Washington, D.C. honoring veterans. 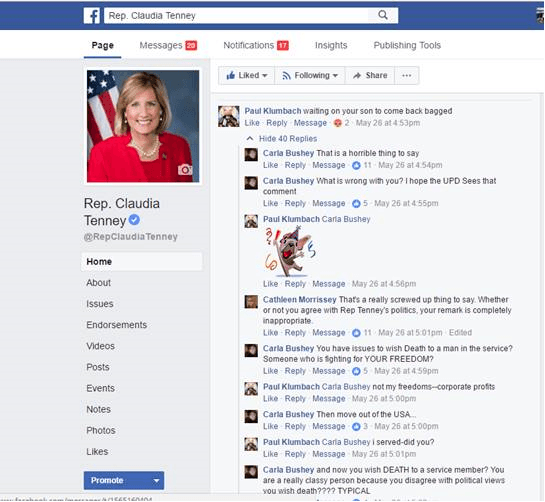 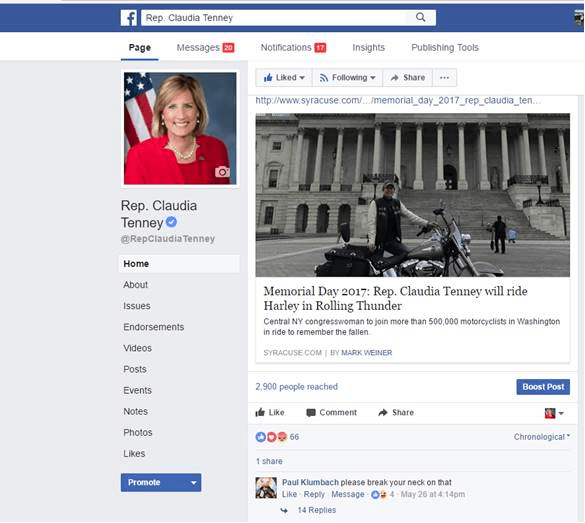