Here is what the Chancellor of Britain’s University of Kent thinks about Breitbart. 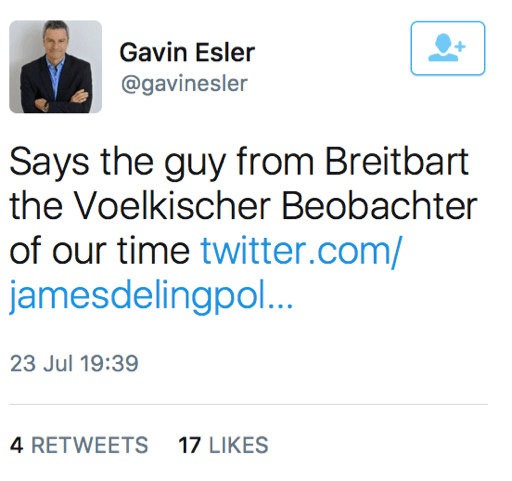 Völkischer Beobachter was, of course, the house newspaper in Germany in the 1930s and 1940s of the NSDAP – aka the Nazi party. So what Esler is doing here in his not-so-subtle way is accusing Breitbart of being a Nazi publication.

Yes, part of me thinks: so what? Angry leftists are forever accusing people who disagree with them of being Nazis; and of course in Breitbart’s case the charge is especially absurd given that Breitbart’s founder and CEO (together with several senior editors) is Jewish, that the site is pro-Israel, pro-freedom-of-speech, pro-property-rights, pro-free-markets, pro-civil-liberties, pro-democracy – none of which policies would have found much favor with the Nazis.

Esler in fact, currently, holds the most senior position at what is apparently one of Britain’s leading universities.

The University of Kent’s alumni include all manner of interesting characters such as the brilliant literary author Kazuo Ishiguro, lesbian thriller author Sarah Waters, the world’s most successful bondage/soft-porn author EL James, the quavery-voiced chanteuse Ellie (‘Starry Eyes’) Goulding, the White-Van-man-hating socialist toff Lady (‘Call me Emily Thornberry’) Nugee, Legolas from the Lord of the Rings trilogy and Steve Hillage, out of Prog Rock ensemble Gong.

Before his elevation within the groves of academe, Esler was one of the BBC’s leading reporters and newscasters, ending his career as chief presenter on one of the BBC’s flagship shows Newsnight.

Now, perhaps it becomes clearer as to why Esler subsequently deleted his tweet. (Sadly, the internet never forgets: I took a screen grab)

Not, I suspect, because he regretted the sentiment: it’s an unfortunate fact that almost everyone at the BBC and in academe thinks that anyone to the right of the Guardian or CNN is basically Hitler.

Rather, it’s simply that these people don’t like being caught in public revealing their naked bias.

The whole point about working for the BBC – as Esler did for most of his career – is that you have to maintain the pretence of being politically impartial.

The same goes, presumably, for when you get a job at senior levels in academe.

Of course they’re all left-wing: violently, passionately, unapologetically so. But it doesn’t do to give the game away too blatantly. Otherwise, conservative people – those few that haven’t had their conservatism brainwashed out of them by the education system – might notice. And that would be embarrassing.