An elderly Oklahoma woman killed several venomous copperhead snakes by herself Thursday using a shotgun, shovel, and a rake handle, according to a Facebook post.

The 72-year-old woman, only identified as Mrs. Newby, slaughtered 11 copperhead snakes that took residence under her home in Lequire, WTVD reported. 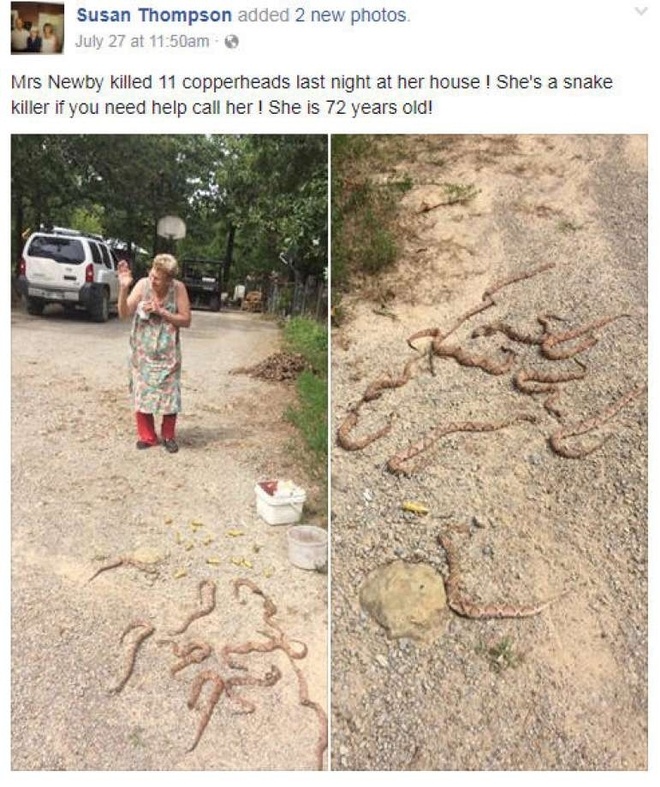 Newby’s neighbor, Susan Thompson, said she paid Mrs. Newby a visit Thursday when she spotted a bunch of dead snakes on the ground.

Amazed by what she saw, Thompson posted a photo of the dead snakes on Facebook with the caption: “Mrs. Newby killed 11 copperheads last night at her house! She’s a snake killer if you need help call her! She is 72 years old!”

Thompson added that her neighbor, determined to make sure no snakes would return to her property, planned to “sit outside” and “wait for some more” snakes.

As of Sunday, Mrs. Newby killed a total of 17 snakes, according to Thompson’s second Facebook post about Mrs. Newby.

The hundreds of people who commented on Thompson’s post seemed amazed that an elderly woman could take on so many snakes.

“Bless her heart!” another person wrote.

Thompson, however, is just proud to call Mrs. Newby her friend.

“I’m very proud to call her my friend! And know she has my back!!” Thompson wrote.