Roughly sixty percent of surveyed respondents want to stop all legal and illegal immigration, says a pair of sophisticated polls which allowed people to speak their mind without fear of progressives’ hate.

The polls of white Americans also showed that American college graduates are even more opposed to immigration than the average American, flipping the commonplace claim that people with additional years of education are more welcoming of divide-and-rule diversity than are blue-collar Americans.

The little-known 2010 report also showed that almost three-of-four white liberals hide their preference for zero immigration. According to the survey, which was conducted in 2005:

The second poll was conducted in 2010 and was published in 2014. It showed similar opposition to any and all immigration — plus a greater willingness by employed Americans to reveal their opposition. The second study concluded:

The surveys help explain popular opposition to the establishment-boosted cheap-labor-and-amnesty “Comprehensive Immigration Reform” bill of 2013, and also help explain the hidden public support for candidate Donald Trump in the 2016 election.

Both polls focused on white people because they are cheaper and simpler to survey. Other polls show large but hidden opposition to immigration among African-American and Latino populations, who also share whites’ sympathy for striving migrants.

This nation’s cheap-labor immigration policy has a huge impact on the economy — and it creates massive financial incentives for investors and employers to inflate public support for mass immigration. For example, Facebook founder Marc Zuckerberg funded a skewed poll in 2014 to boost apparent public support for the “Gang of Eight” comprehensive immigration bill in 2013. In contrast, very few public polls try to find out what people really think about immigration.

The first of the two surveys were conducted by academic Alexander Janus, now teaching at Edinburgh University, and was published in December 2010 by the peer reviewed journal, Social Science Quarterly.It is titled “The Influence of Social Desirability Pressures on Expressed Immigration Attitudes.” Janus conducted his survey from October 2005 through February 2006 via the existing Time-Sharing Experiments for the Social Sciences survey.

He divided his sample of 700 non-Hispanic whites into two demographically similar groups.

The first group was told: “Now I am going to read you three/four things that sometimes people oppose or are against. After I read all three/four, just tell me HOW MANY of them you oppose. I don’t want to know which ones, just HOW MANY.” The issues were federal government increasing assistance to the poor, professional athletes making millions of dollars per year, and large corporations polluting the environment.

This chart shows the percentage of people who support “cutting off immigration to the United States” in the “unobtrusive estimate” column: 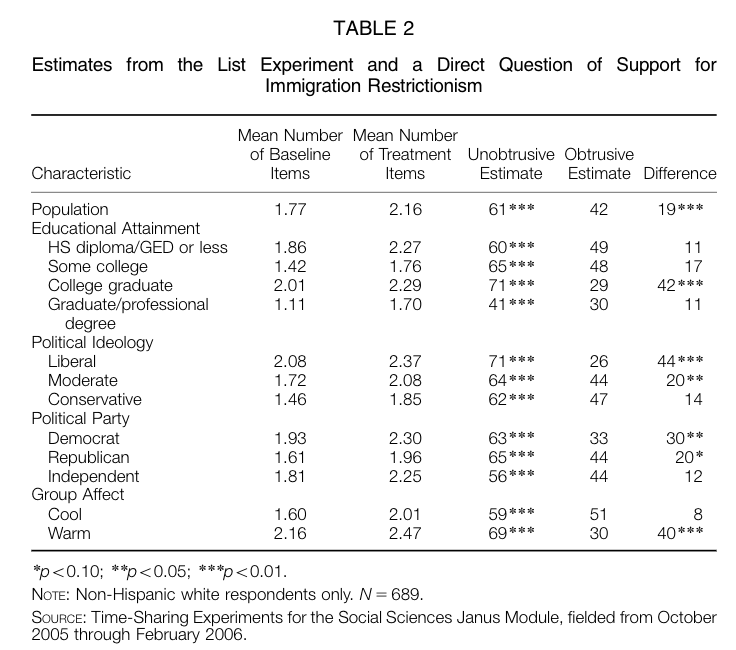 The “unobtrusive  column” shows 61 percent of all respondents favor “cutting off immigration.” So do 71 percent of liberals, 63 percent of Democrats, 71 percent of college graduates — but only 41 percent of people with postgraduate degrees.

The paper also shows that roughly one-third of the 61 percent — or 19 points — hide their real opinion from pollsters. Almost two-thirds of college graduates — 42 points of the 71 percent — also hide their opinions. According to the survey paper:

This study’s findings serve as a call to immigration scholars to be more sensitive to self-presentational concerns within the survey interview, a topic that for a long time has captured the interest of the racial attitudes literature but has received scant attention from scholars who study immigration.

The “group effect” question refers to a section where the pollsters asked people if they have a “warm” or “cool” attitude towards immigrants. It reveals only a small difference between the two groups on “cutting off” immigration.

The second survey has 793 people in the first control group, plus 816 people in the “unobtrusive” group who were asked the extra question about immigration. It is titled “Has Opposition to Immigration Increased in the U.S. after the Economic Crisis? An Experimental Approach,” and it concluded:

Opposition to immigration, although higher than that estimated directly, does not increase after the economic crisis. Instead, the post-crisis period is marked by greater tolerance to overtly expressed anti-immigration sentiment, despite little change in the underlying true levels of opposition. This … suggests that the U.S. general population of reference sees appearing tolerant as less favorable/important.

When asked by Breitbart News about his survey, Janus responded by urging more studies to determine what Americans focus on when they think about immigration:

I would be cautious about drawing too much from the results of this study. Respondents could have had different interpretations of the immigration item. Does ‘immigration’ refer to legal or undocumented immigration? My sense is that one of the most divisive issues is what to do about the people who are already in this country illegally, but we do not ask about this. Additional studies that use alternative methodologies that control for social desirability or that use alternative immigration questions are clearly needed.

But opposition to the mass immigration policies is often visible in the business-funded polls. For example, the 2014 Zuckerberg poll got high approved for amnesty by asking skewed questions — but it also showed that intense Latino concerns. For example, 78 percent of Hispanic respondents supported “substantially increasing security among US-Mexican border.” and 77 percent favored rules requiring companies to check job applicants’ documents.

The media is often loath to admit what the numbers show. A July 2016 poll by vox.com showed that Midwesterners were particularly opposed to immigration, foreshadowing Trump’s decisive victory in Michigan, Wisconsin, and Pennsylvania. But Vox’s progressive staffers simply ignored their data and claimed that the numbers show public “concerns about physical security — crime and terrorism — are more important than concerns about jobs and the economy.

Media polls are usually skewed by professional and political alliances. In fact, one D.C.-based pollster for a famous newspaper told his reporter in 2014 that he polled people to find out how they respond to questions, but not to find out what they really believe.

Pollsters and polling companies do not want to irritate business and political clients who favor the mass inflow of workers and consumers. So they have a commercial incentive to not collect, not notice and not publish anti-immigration, pro-American results from the public.

Many middle-class Americans hide their views from pollsters, fearing hate from progressives which can cost them jobs in an Internet-enabled “fishbowl” society where once-private opinions are easily publicized and detected.

Pro-American advocacy groups have sometimes exposed the public’s worry about mass-immigration — but their data has been treated as unreliable. But a few pollsters have produced good data on the issue, including Kellyanne Conway, who helped Trump shape his pro-American — not anti-immigrant — message in 2016.

Very few media people have recognized the deep public opposition to mass immigration. For example, Julia Preston, the former chief immigration reporter at the New York Times, rarely wrote about the public’s suppressed attitudes towards cheap-labor immigration. Instead, she served as a megaphone for foreigners’ concerns when she was employed at the NYT, and in her subsequent work as a reporter for the Marshall Project. For example, Preston wrote this recent article about migrants’ worries:

Tens of thousands of families from El Salvador, Honduras and Guatemala, and some from Mexico, came here citing their need for protection from predatory gangs and criminal violence. Now, they face the prospect of being sent back to countries they fear have not become any less dangerous.

Of nearly 100,000 parents and children who have come before the courts since 2014, most asking for refuge, judges have issued rulings in at least 32,500 cases, court records show. The majority — 70 percent — ended with deportation orders in absentia, pronounced by judges to empty courtrooms.

But her views are out of step with public opinion. For example, the comments by the mostly liberal readers of the Washington Post showed near-universal hostility to Preston’s welcome-the-migrants theme. The top-ranked comment, for example, says:

This is stupidity. Just because your home nation is filled with violence and savagery, doesn’t make you America’s problem. I feel bad for these people, but they still have no case.