A new report by left-wing and business economists says the nation’s economic growth can be accelerated to 4 percent per year — if Congress annually imports two immigrant consumers for every American teenager who turns 18.

The business-boosted alternative “population bomb” two-for-one plan would nudge up the nation’s annual economic growth from the current rate of roughly 2.5 percent to 4 percent per year, say advocates. The economic growth will happen as investors and companies sell additional apartments, roads, autos, food and entertainment to eight million new immigrant consumers each year.

The two-for-one plan yields an extra growth of just 1.5 percent for investors — but would force each graduating class of 4 million American youths to pay higher rental costs and bear long commuting times, to receive lower wages and to work longer hours as each year’s inflow of 8 million migrants expand the population from 320 million up to more than 400 million by 2028. 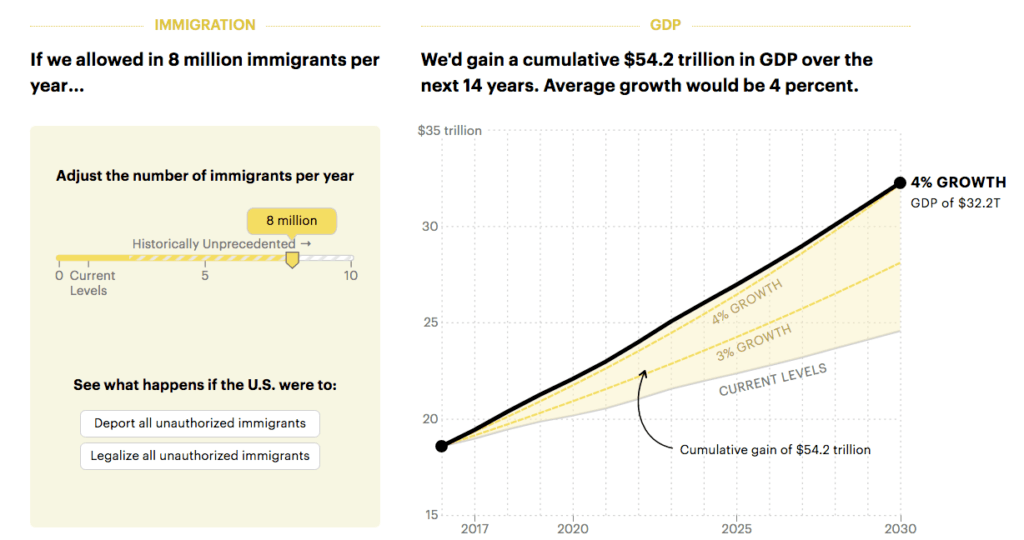 Trump’s “proposal would reduce legal immigration by half, including many immigrants who work legally in our agriculture, tourism and service industries,” said South Carolina GOP Sen. Lindsey Graham, who tried to help his allies in the low-wage sector with his failed 2013 “Gang of Eight” cheap-labor-and amnesty plan.

Flake told CNN August 3 that he worked with imported farm laborers at the family farm in Arizona, saying “they were making America better and we were better off because of their hard work. And so I’ve been very supportive of … robust temporary worker programs to allow us to have the labor that we need to benefit our economy. His proposal would reduce legal immigration by half, including many immigrants who work legally in our agriculture, tourism and service industries.”

Durbin, the deputy leader of the Democrats in the Senate, complained that Trump’s merit-based reform would make it difficult for companies to hire foreigners for jobs in hospitals, hotels, and restaurants: “The biggest flaw in this proposal is the notion that there are long lines of Americans waiting to pick fruit and to work in hospitals and hotels and restaurants and meat processing plants,” he said. “Exactly the opposite’s true.”

An editorial by the establishment Washington Post urges the use of immigrants to boost the economy, even as it also admit that more labor cuts wages: “While fresh immigrants do depress wages for some low-skill and minority workers, as Mr. Trump argued, they act as rocket fuel for the overall economy. By cutting their numbers, Mr. Trump would undercut the nation’s prospects.” The Washington Post is owned by Jeff Bezos, owner of Amazon.com.

And so again, we’re ending unskilled chain migration, but we’re also making sure that the great inventors of the world, the great scientists of the world, that people who have the next great piece of technology can come into the United States and compete in a competitive application process — a points-based system that makes sense in the year 2017. 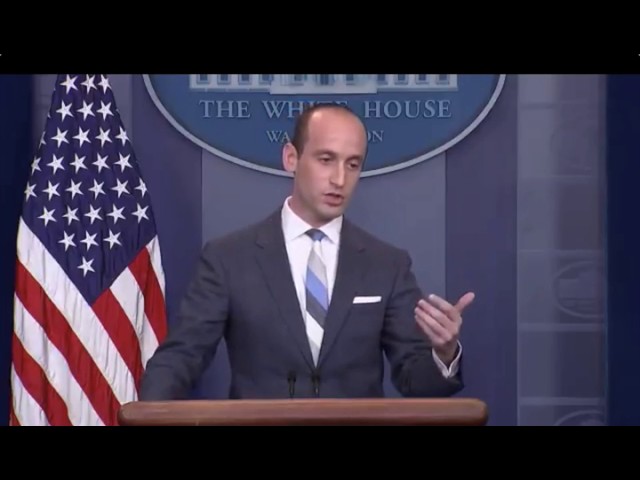 Currently, millions of young and working-age Americans — and also many recent immigrants — are stuck in low-wage jobs or in communities with few jobs. In fact, the percentage of “prime age” Americans in the workforce is still roughly three percentage points below its peak in 2000.

This massive level of immigration coexists with slow growth in productivity and slow economic growth, especially for the eight years after 2008 when investors realized that low-wage Americans and new immigrants were unable to pay their costly housing debts. 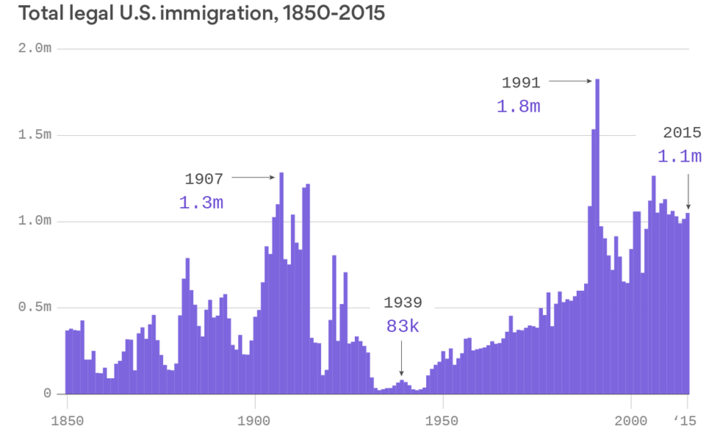 Amid that huge migration to the United States, the U.S. economy grew at a slower rate than Mexico’s economy, according to this chart draw from data at the federal reserve bank in St. Louis. The blue bar shows Mexico’s annual growth. The red bars show U.S. annual economic growth. 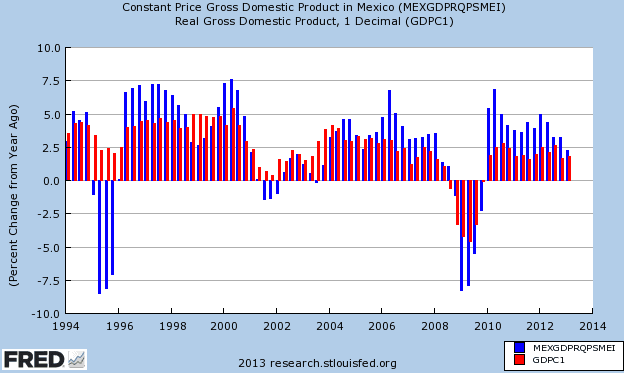 Trump’s merit-based immigration reform would halve the inflow of unskilled foreign workers and would force companies to recruit, train and pay sidelined Americans. Any labor shortage would also pressure companies to buy American-built labor-saving technology, allow taxpayers to shrink government agencies and reduce welfare spending, and would likely help reduce the huge opioid epidemic that has killed more than 50,000 Americans in the last several years.

Any pay increase for employees would also narrow the wealth gap between employees and investors that have greatly widened under the pro-immigration policies of President George W. Bush and Barack Obama.

Business-boosted groups, however, are pushing for even more foreign workers and consumers.

The two-for-one plan was outlined by ProPublica, which combined a study by Trump-opponent Wall Street economist Mark Zandi with a study by two academics funded by the Center for American Progress. The center is the Democratic Party’s primary think-tank.

ProPublica is a news-and-advocacy organization created by Herbert Sandler, who sold his mortgage-lending company in 2006 for $24 billion. Sander made his fortune by selling mortgages to lower-income Americans and many new immigrants. Along with other bankers, Sandler has been blamed for contributing to the real-estate bubble. That claim is strongly denied by the bank’s supporters.

In an analysis for ProPublica, Adam Ozimek and Mark Zandi at Moody’s Analytics, an independent economics firm, estimated that for every 1 percent increase in U.S. population made of immigrants, GDP rises 1.15 percent. So a simple way to get to Trump’s 4 percent GDP bump? Take in about 8 million net immigrants per year…

… immigrants make the pie bigger. According to a recent paper by economists Ryan Edwards of Mills College and Francesc Ortega of Queens College CUNY, even undocumented immigrants spur growth. Using the paper’s methods … You can see what these hypothetical scenarios would look like in our chart above…

The Zandi two-for-one analysis is built on Edwards’ economic paper, titled “The Economic Contributions of Unauthorized Workers.” The authors wrote:

The paper says that cheap workers spur greater investment, while fewer workers will reduce investment, lessen economic activity, and drop wages. But the paper assumes instant and perfect adjustments by employees and investors, ensuring that any gain for employees — such as an end to cheap-labor immigrants — is immediately wiped out by a self-serving reaction from employers and investors.

Firms and entire industries in the U.S. and in other economies, past and present, respond craftily to labor shortages.  The framework that we use produces results that are consistent with this historical pattern, while also avoiding the sticky and fraught issue of predicting how and when new technologies will be developed, which nobody knows…

In other words, we are not so bold as to predict that firms in California or elsewhere will make vast leaps in farm automation that will enable them to replace missing workers with machine pickers, for example.  This kind of thing was profiled very recently in the LA Times, and the twofold punchline is:  Yes, theory and empirical experience says that firms will work hard to innovate in this way, and they clearly are.  But they haven’t yet been very successful, and who knows what the future will bring.

In theory, wages should rise.  One of the things that has been odd about the current recovery however is how slowly wages have risen, even with a very large reduction in the unemployment rate that presumably improves workers’ bargaining positions.  But it appears that in many industries firms have simply left open slots unfilled rather than raise wages significantly to coax more labor into the market.  I think it would not be wise to count on vast increases in wages paid to current natives and documented immigrants from a mass deportation policy.

But Edwards’ paper is contradicted by another new paper which immigration enthusiasts are also using to argue against Trump’s merit-based reform. The other new paper says the exclusion of legal Mexican farm workers after 1964 did not raise American farm workers’ wages but it also admits that farmers hired well-paid American engineers to build labor-saving machines. The paper, co-authored by Michael A. Clemens at the D.C.-based Center for Global Development, admitted:

The exclusion of Mexican bracero workers [after 1964] was one of the largest-ever policy experiments to improve the labor market for domestic workers in a targeted sector by reducing the size of the workforce. Five years after bracero exclusion, leading agricultural economist William E. Martin uncharitably assessed the advocates of exclusion in a little-read book chapter. Those who had believed exclusion would help domestic farm workers “were obviously. . . extremely naïve”, he wrote, and the hoped-for [wage] effects in the labor market never arrived because “capital [machinery] was substituted for labor on the farm and increased effort was exerted by the [American] agricultural engineers in providing the farmers these capital alternatives.”

The ProPublica report relied on Wall Street economist Zandi to provide the two-for-one chart based on Edwards’ paper. But ProPublica did not mention a 2016 research report by Zandi, which declared that Trump’s proposed immigration reform would raise wages for Americans.

“As the immigrants leave, the already-tight labor market will get tighter, pushing up labor costs as employers struggle to fill the open job positions,” said the report, which was intended as a criticism of Trump’s campaign promises. “Mr. Trump’s immigration policies will thus result in … potentially severe labor shortages, and higher labor costs,” the 2016 report promised. Zandi is a long-standing, self-declared Democrat and an advocate for Democratic policies. In June 2015, for example, he donated the legal maximum of $2,700 to Hillary Clinton’s campaign.

The 2016 Zandi report was partly based on an earlier Zandi study of Arizona’s economy after the forced departure some illegal immigrants. That earlier study showed:

The median income of low-skilled whites who did manage to get jobs rose about 6% during that period, the economists estimate … wages rose about 15% for Arizona farmworkers and about 10% for construction between 2010 and 2014 … Some employers say their need for workers has increased since then, leading them to boost wages more rapidly and crimping their ability to expand … graduates [at a federal job-training center] now often mull two or three jobs offers from construction firms and occasionally start at $14.65 an hour instead of $10 …  At DTR Landscape Development LLC, the firm’s president, Dick Roberts, says he has increased his starting wage by 60% to $14.50 an hour because he is having trouble finding reliable workers.

Moody’s analysis did not take into account the fiscal costs of adding more immigrants to the country: the cost of providing public goods like education, health care, welfare benefits, etc. Calculating the costs of an ever-changing group of people is incredibly complex, and estimates vary widely based on assumptions about immigrants’ average age, education level, number of children, and even legal status.

Those costs of were detailed by the National Academies of Sciences in 2016. They include $56 billion in costs for state and local taxpayers, and a huge 5 percent “immigration tax” levied on Americans, whose wages are reduced by cheap immigrant labor. That 5 percent immigration tax was estimated to reach roughly $500 billion a year, and it is taken from employees and given to employers and investors.

“Add eight million consumers, you will have more economic growth,” said Roy Beck, founder of NumbersUSA, which supports Trump’s reform. “Does that help Americans? It does help the wealthy… their consumption does increase,” he said. But Americans want to live in their United States of America, not in the business-created United Mall of America, he added.