What is the cause of the devastating fires in California which have killed more than 40 people, destroyed or damaged more than 5000 buildings, with an estimated financial loss running into the tens of billions of dollars?

Well, at least it is if you believe all the usual suspects.

Here’s Al Gore, trying to pin it on “global warming” while simultaneously promoting the renewables interests that have made him so disgustingly rich:

“All over the West we’re seeing these fires get much, much worse,” Gore said, noting that a number of factors contribute to this. “The underlying cause is the heat.”

[…] “The heart of it is that we still depend on fossil fuels,” Gore said.

“It’s been a tough couple of weeks with hurricanes and earthquakes and now these terrible fires,” Clinton told an audience at the University of California, Davis while promoting her new book “What Happened.”

“So in addition to expressing our sympathy, we need to really come together to try to work to prevent and mitigate, and that starts with acknowledging climate change and the role that it plays in exacerbating such events,” Clinton said, according to First Coast News.

All those factors — high temperatures, low humidity, strong winds — are exacerbated by climate change, and as climate change intensifies, they will, too. Though Mill Valley has not experienced a calamitous fire since the 1920s, the odds of its occurrence will steadily rise. And what all these fires have shown us is that in the face of a firestorm, we’re virtually defenseless.

Some scientists are also concerned that if wildfires become more frequent or intense, the carbon emissions they release could exacerbate the progression of climate change, leading to a kind of feedback loop—more warming leads to more fires, which release more carbon, which causes more warming, and so on.

The truth of course, is rather different

The fires have nothing to do with “climate change.” They were a weather event – not a climate event.

The vegetation was dry after little rain over the summer (quite normal).  The ground vegetation was perhaps drier than normal because the summer had been usually warm (by 1-4 F as shown by the NOAA Western Region Climate Center map for the last 90 days.)

On Sunday afternoon, winds approaching the mountains of northern CA increased, and the vertical structure of an inversion over cooler air was established.  A strong mountain wave/downslope wind event was initiated, bringing winds of 60-90 mph to the crests and upper lee slopes of the regional terrain.  Such winds helped initiate the fires (possibly due to interaction with power lines) and then caused the resulting fires to explode.  The fires, driven by the strong, gusty winds, pushed very rapidly into populated areas.

Here, via Paul Homewood, is the evidence: 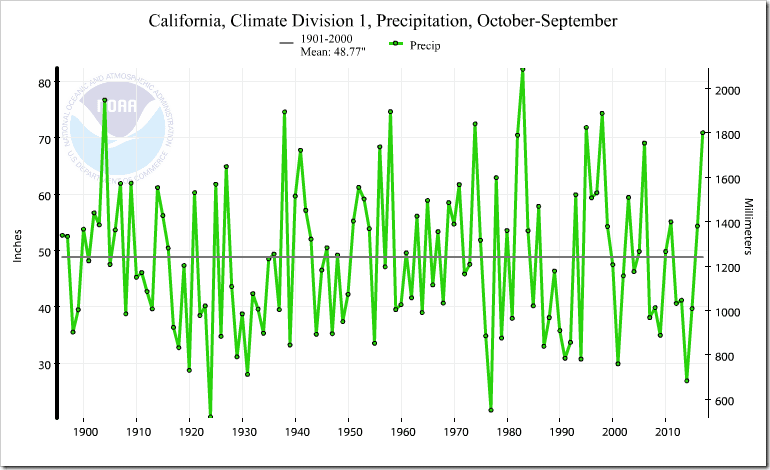 There is nothing historically unprecedented about this wildfire season. Contrary to the claims made by green activists, wildfires destroyed many more acres of forest before the days of “global warming”. 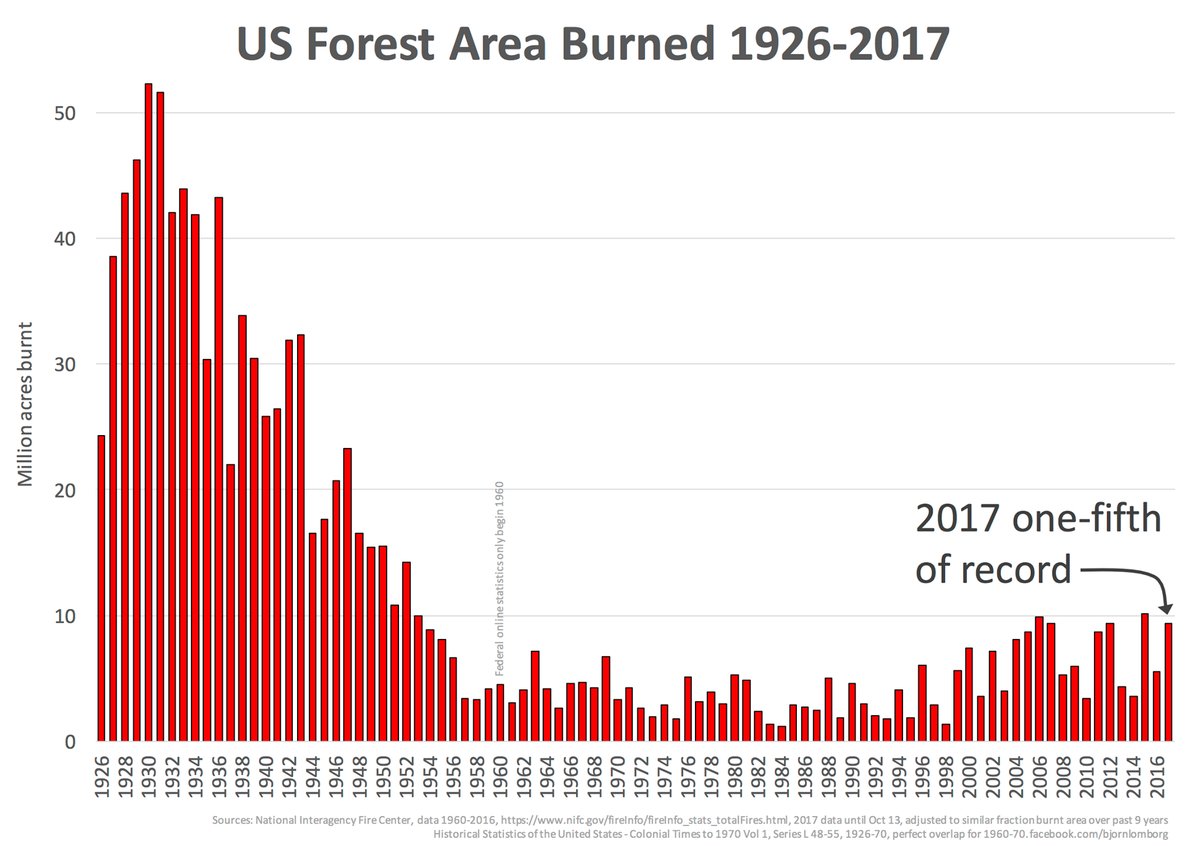 As Bonner Cohen notes at CFACT:

Wildfires have been a scourge in California and other areas of the arid West for as long as anyone can remember. California’s dry climate and strong winds – Diablo in the north and Santa Anna in the south – are often a wildfire’s best friend.

The region is also dotted with huge national forests, which for decades were governed by disastrous fire-suppression policies. In forests, wildfires, usually caused by lightning, can be nature’s way of removing undergrowth before it has a chance to build up to dangerous levels. When these relatively small fires are suppressed, forests can become veritable tinder boxes. Even after enactment of the Healthy Forests Initiative in the last decade, a law that allows for the removal of dead and diseased trees in national forests, many of the lands managed by the U.S. Forest Service, are still at risk of igniting a conflagration.

What’s more, restrictive zoning laws in cities like San Francisco and San Jose have put home prices out of reach for people of upper-middle, middle, and lower income. Unable to afford homes in high-end urban areas, many people are forced to live in distant suburbs, which puts them closer to areas where fire are likely to break out.

Greens and liberals created this mess. Looks like its going to be conservatives – again – who are going to get the U.S. out of it.

Interior Secretary Ryan Zinke on Tuesday directed all land managers and park superintendents to be more aggressive in cutting down small trees and underbrush to prevent wildfires as the smoke-choked West faces one of the worst fire seasons in a decade.

In a memo, Zinke said the Trump administration will take a new approach and work proactively to prevent fires “through aggressive and scientific fuels reduction management” to save lives, homes and wildlife habitat.