The United Nations has officially confirmed what many of us, including President Trump, knew already: the Paris climate accord was a complete waste of space.

As UN Environment admits in its latest Emissions Shortfall report, even when you add up all the CO2 reduction pledges made by all the signatory nations at Paris, it still comes to only a third of what is supposedly necessary to stop the world warming by more than 2 degrees C by the end of this century.

According to UN Environment’s head Eric Solheim, the world is heading for disaster:

“One year after the Paris Agreement entered into force, we still find ourselves in a situation where we are not doing nearly enough to save hundreds of millions of people from a miserable future. Governments, the private sector and civil society must bridge this catastrophic climate gap.”

Another way of looking at it, though, is that President Trump’s decision to pull out of the Paris accord is now fully vindicated. Had the Agreement been ratified, the U.S. would have handed countries like China and India a huge competitive advantage over the American economy. But – as even the UN now admits – it would have made no discernible difference to the alleged problem of “global warming.” So what, exactly would have been the point?

Here is a pretty graph prepared by the BBC that gives an idea of this “catastrophic” emissions reduction shortfall: 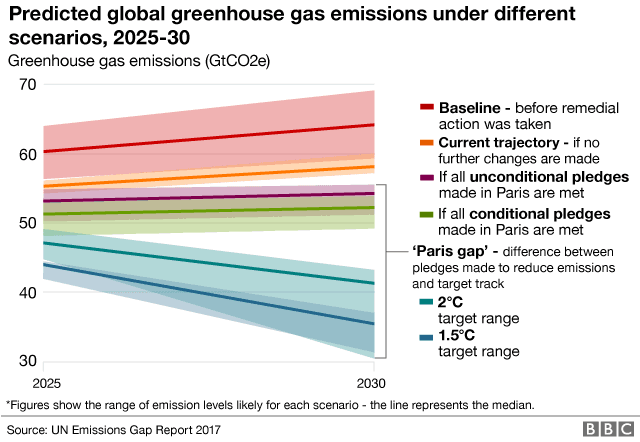 The so-called ‘Paris gap’ is just a figment of the UN’s/BBC’s imagination. It gives the false impression that all those carbon reduction promises (known as INDCs: Intended Nationally Determined Contributions) made by the various signatory nations in Paris are going to make a difference.

In fact, as Skeptical Environmentalist Bjorn Lomborg calculated at the time, they don’t amount to a hill of beans.

If – extremely unlikely though it is – the Paris signatories stick to their INDCs then it may reduce the world’s temperatures by the end of the century by 0.170 degrees C.

That, remember, is the optimistic scenario.

The pessimistic scenario is that will avert a mere 0.048 degrees C of warming.

Or not: let’s not forget that the margins of error in these calculations are significantly larger than these fractions of one degree.

A little understood point of the UN Paris agreement is that it left countries like India and China to increase their CO2 emissions even as the U.S. was forced to rein in its own emissions by adopting more expensive, inefficient, bat-chomping, bird-slicing ‘clean’ energy. That’s why India and China signed: they’re not stupid. It would have given them an enormous competitive advantage over the U.S.

This graph shows how toothless the Paris agreement was: 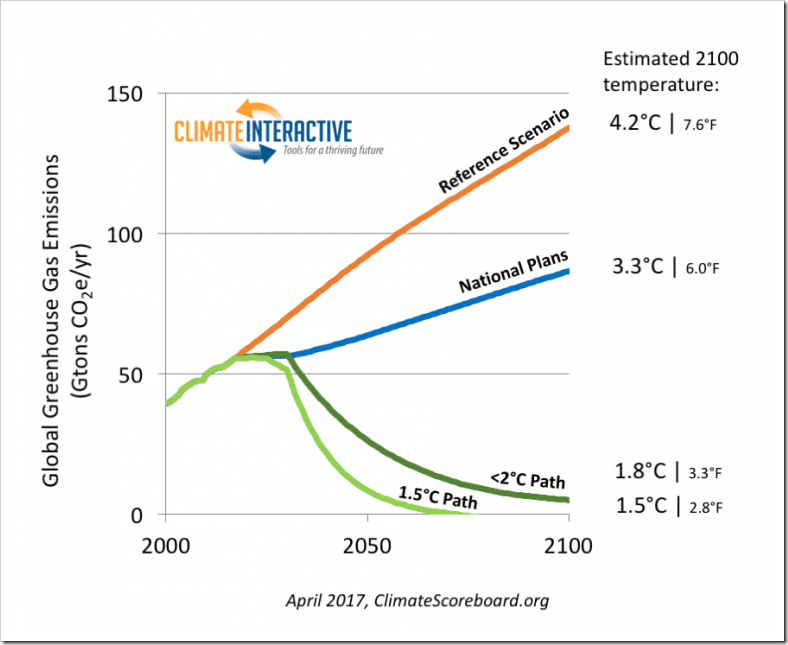 See: despite all the airy good intentions expressed in Paris, the countries of the world have no desire to reduce their carbon dioxide emissions just to appease a Green Goddess no serious person genuinely believes in.

But then, saving the planet was never the point of Paris. Rather it was, as Rupert Darwall describes in his excellent new book Green Tyranny, a scheme designed permanently to weaken the U.S. by forcing it to operate on the same constricting terms that the environmental left has imposed on Europe. Liberty-loving, free (-ish) market, democrat America is anathema to the eco-fascists and their many sympathizers within the European Union.

That’s why, had Hillary been elected and Obama’s dirty plan to sign up to Paris without Senate approval been fulfilled, it would have been game over for America’s status as the Land of the Free.

Enviro-activist billionaire Tom Steyer described Trump’s decision to pull out of Paris as “a traitorous act of war against the American people.”

Funny way of describing a decision which: lowered energy bills; created real jobs (as opposed to subsidized Potemkin jobs like the ones in the wind and solar industries); reduced the cost of living; boosted economic growth; freed Americans from the shackles of the kind of bureaucratic, technocratic, communitarian tyranny which now applies across the EU.

The United States is now the world’s hydrocarbon superpower. Thanks to fracking it has surpassed Saudi Arabia and Russia to become the world’s top energy producer. This abundance of hydrocarbon energy made the United States the biggest loser from the Paris Agreement. Quitting Paris turns the United States into the biggest winner from Paris. Access to cheap energy gives American businesses and workers a colossal competitive advantage in world markets as other nations increasingly burden themselves with high-cost, unreliable wind and solar energy.

We’ll come back to this. It’s important. Unless you’ve understood that global warming is – and always was – just a pretext for an economic takeover by the globalist left, you really haven’t understood the problem.